Recently while playing some Black Ops II with a few buddies of mine from my hospital job, I picked up the Peacekeeper from one of my victims after my PDW-57 ran dry during a Capture the Flag match. Of course, I had seen the DLC update about COD's first DLC weapon, but I wasn't going to buy the map-pack, and this odd duck SMG didn't matter to me until I picked it up. After a few engagements with it, I asked Randy and Will about this little monster. Both spoke glowingly about the Peacekeeper, and Will asked me if the Peacekeeper SMG was real? So, after some research, I decided to devote an entire blogpost to this unique white and blue military sci-fi weapon.

What the Hell is the Peacekeeper?! 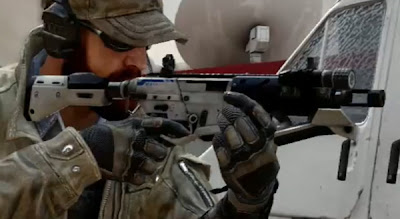 The first question asked by most is if the Peackeeper is a real-steel weapon and the answer is a solid 100% no. While in the fictional world 2025, the United Nations Peacekeeper Organization uses a specialized weapon for their field actives forgoing of their individual national weapon of choice. According to the side of the weapon, the Peacekeeper is manufactured by Arbiter, and fires the FN 5.7x28mm cartridge and seems to be fitted with fore-grip mounted flashlight. The fact of it being an UN official weapon is further reinforced by the original (prior to customization) blue-and-white paint-skin. There is a number of other marking on the weapon that seem to make little sense: 'SEA, AIR, LAND', 'PEACEKEEPER 1227', 'ALEXANDRE, INC.', and a serial number of ''J317-M81215-6112'. 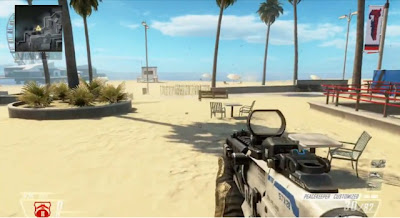 Lead Artisit Murad Ainuddin and Combat Designer Anthony Flame commented that the Peacekeeper was a hybrid between an SMG and an assault carbine with technology and ability that kept within the future world that Black Ops II is set. Their own back-story of this oddball future weapon was of a compact, but long-ranged gun that was specifically designed for VIP and Counter-Terrorism duties that married both a compact weapon that could have long enough range to go beyond the normal PDW/SMG range, touching closer to a commando carbine type weapon.

Is the Peacekeeper an PDW or SMG or an Commando Carbine? 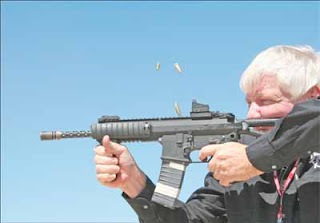 Per normal, Treyarch didn't do their research on the actually firearms definition of what an SMG or PDW is. While they did get it right with the interesting PDW-57, but they failed when it came to labeling Peacekeeper an 'SMG'. The original drawings for the gun were similar to the H&K UMP .45, but, firing the 5.7x28mm round and not a common pistol cartridge firmly places the Peacekeeper in the personal defense weapon category. If the Peacekeeper had chambered a normal assault rifle cartridge, than it could have fallen under the commando carbine list.

To me, the Peacekeeper is stylistic extension of a type of weapon that is taking shape in law enforcement, counter-terrorism, and VIP protection circles; the hybrid compact gun that sits between the carbine and PDW. Weapons like the cancelled Knights Armament PDW, which was styled after the Colt M4, but chambered the custom designed 6.x35mm cartridge, or the also cancelled Colt MARS that chambered the 5.56x30mm round, or even the Magpul PDR are similar to the Peacekeeper of 2025.


The Peacekeeper: Broken Down Piece-by-Piece 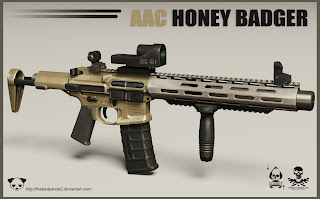 Much of the Peacekeeper's core lower assembly and function comes from the AAC Firearms PDW 'Honey Badger' that chambers the (very cool) .300 Blackout round. This Honey Badger attempting to be an next-gen PDW that functions effectively with an suppressor and could be a placement for the old H&K MP5SD.  The rather puny stock appears to be more or less the same that is fitted to the AAC Honey Badger, however, the fore-grip and it's unique air-cool grill work are custom work of the artist. 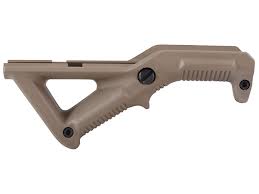 Fitted under this custom designed barrel assembly is the new Magpul angled fore-grip (AFG), and is rumored to more effective than the older vertical style. The iron sights should be familiar to most, they are heavily borrowed from the AR-15/M-16/M4 family. And finally, the Peacekeeper chambers the FN 5.7mm round, originally designed for use in the P90 PDW and now also used in the Five-Seven pistol. At the moment, these are the only real-steel weapons that use the cartridge.One area that is not borrowed from the Honey Badger is the muzzle break, which appears similar to the Surefire FH556-212A flash hidder, which gives it that cool flash profile. Near the trigger assembly, is the Magpul 'bad lever', which speeds up reloading time by not having the shooter use their hands to re-cock the bolt.

The Peacekeeper: The Odd-Duck Gun of Black Ops: II

Given that the Peacekeeper was completely 100% designed in the virtual world by the game developers for only the multiplayer arena, it was given some queer properties. This SMG/PDW looks more like commando carbine, certain the magazine size is not in keeping with the real-steel SMG/PWD of the world. This is also expended to the capacity of the mags, which is only thirty, when the P90 is about fifty, and normal Five-Seven magazine is twenty. Then there is the caliber, the Peacekeeper fires the FN  P90/Five-Seven 5.7mm round, specifically developed for a personal defense weapon, and would not completely live up to the back-story 2025 role that Treyarch setup, because it's only effective to 200 yards. Also, the 5.7mm cartridge is not reflected in the animation for ejected brass, which is borrowed from the traditional assault rifles. Some have called this gun the 'assault rifle in the SMG class'. 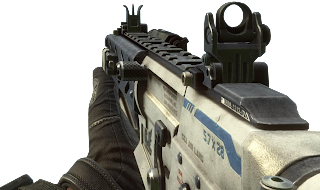 Then we come to its battlefield abilities: the Peacekeeper is terrible at long ranges, despite being able to reach out and get hit-markers on a tango along with having good AR-15 style iron-sights. It is equally bad at close ranges when tangos are up in your grill. This means that the Peacekeeper is more of intermediate range king, what a real-world, real-steel commando carbine would also be good at. This is the range where I get my ass kicked at in the game. This does not stop gamers from loving their Peacekeepers with steamy passionate lush, making them forgo all of their other weapon classes and exclusively using Peacekeeper. In my opinion, the Peacekeeper should have been the AAC Honey-Badger carbine and chambered the .300 Black-Out cartridge...how cool would have that been?

Why the Peacekeeper is Important to Military Sci-Fi 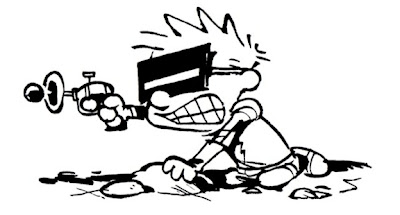 Science fiction creators often develop their own unique weapons, and this video game fictional weapon is a good lesson to all of us that are MSF creators. The Peacekeeper is one of the most widely used fictional MSF weapons at the moment, with millions of Black Ops: II players (with the HALO weapons at a close second) using the Peacekeeper. That in itself is important, but there is another lesson, getting the gun right. While Treyarch has money, resources, and staff at its fingertips, the Peacekeeper is an flawed weapon, both from a design standpoint and fictional role. The use of the FN 5.7mm cartridge for a PDW is completely correct, but not for a multi-role firearm, along with some other design elements. When someone like me creates an fictional military with frontline combat soldiers, these soldiers should go into battle with realistically designed firearms, even if it fires beams, darts, or angry bees. While I celebrate the fact that Black Ops: II has brought MSF to the forefront of entertainment and give millions access to a MSF firearm, the Peacekeeper should have been designed with more care...of course, this is just a video game, and most gamers don't devote the amount of mental time to issues like this...but then again, they do not have a MSF blog.