News from the Front 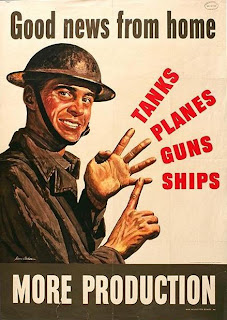 Upcoming events on FWS
FWS will be ramping up wartime production in the next couple of weeks. Here is what's upcoming:
More News
-We just recived in from Lone Star Comics, the complete Dynamo Joe comic series for review. Dynamo Joe was printed by First Comics in 1986-1988, and was the one of the first American comics to be done with Japanese Mecha. The series was done by an American writer & artist, Doug Rice.
-Volume Three of the 1990's Forever War grahpic novel is on its way from Mile High Comics! This was a great find for a good price. I have never seen the third volume, let alone seen it for sale.
-I am in the middle of reading Old Man's War by John Scalzi. At this point, I could not be happier with the book. It may be one of the best military sci-fi books I have read since the Forever War.
-Work continues on our novel-sized works. I am at present editing Automatic and writing my next novel, Endangered Species.
-Keep Frosty
William
Posted by William at 19:42 No comments: 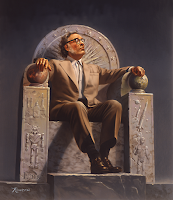 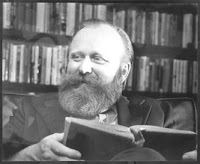 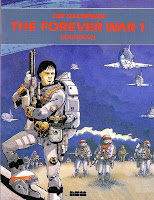 At the moment,the staff of Future War Stories is the middle of reading these old good printed books:

-Old Man's War-finally decided to read this after a Google Book preview, and when I heard that their weapons use nanotech.

-The Forever War Graphic Novel Volume One-I found this one at a local comic store, and ordered it. I remember this one when in came out in 1990.
Should have bought it then. Hindsight...

Welcome to the War!

If you are reading this: Welcome to Future War Stories...a Blog devoted to Military Science Fiction in all media forms. From books, movies, games, the world of future armed conflict will be covered.

Along the way, I will blogging on the status and release of my own Hard Military Sci-Fi, along with a few others

My hope is to release a Flash Fiction Serial here in the next few days for free.

Any intel on Military Sci-Fi is most welcome.

Again, welcome to the War! Keep your head down...
Posted by William at 10:23 No comments: