Here we go again! This is yet another installment of the forgotten military science fiction games. While some of these are more forgotten than others, like MDK, these are games that have dropped off the public radar. Only three more lists to go! At the moment, FWS is researching and finishing the Clone soldiers article, but I felt that FWS needed an update. 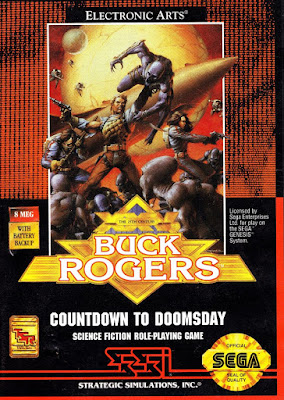 The Buck Rogers character has been around in science fiction and the public consciences since 1928 and our understanding of who Buck Rogers is comes from when we first introduced to him. For me, Buck Rogers was framed by the 1970s TV show and when the Buck Rogers XXVth Century brand came out in 1988 under the TSR banner I was confused. In the 1980s, the holder of the Buck Rogers name was Lorraine Dille Williams, the granddaughter of the original creator and she was the manager of TSR from 1986-1988. She brought TSR the license to bring Buck Rogers under the TSR banner as an RPG using 2nd Edition D&D rules. There was a massive rollout of other games and even books under the new banner of Buck Rogers XXVth Century. During this time of new Buck Rogers, several video games for PC and home console were rolled out: Countdown to Doomsday and Matrix Cubed. The games were centered on a conflict between the new Earth government and the RAM faction on Mars from a very RPG format that altered between games. From 1988 to 1995, the Buck Roger XXVth Century ran its course and it ended around the time that TSR was having more money issues that drove it to be sold to Wizards of the West Coast.
2. ORGUSS (Big West 1984) 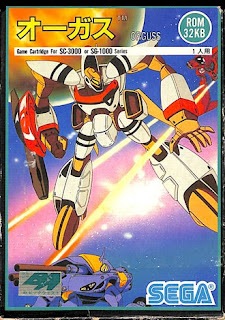 Super Dimensional Century ORGUSS was developed by some of the same people and studio as the legendary Macross series, but suffered a early death back in 1984. FWS did a complete write-up on this anime series and like many anime properties, there was a simple video game developed. This side-scroller shooter was developed for the SEGA SG-1000 console, which is the predecessor of the Master System, way back in 1984 by MBS and the major anime advertising firm: Big West Frontier. This is a simple game with the ORGUSS mecha being able to transform into all three modes with different skills and abilities. The game has no end and pits the ORGUSS mecha against enemy mecha and bases across the damaged post-bomb Earth. The cool elements of the game was that is was based on Super Dimensional Century ORGUSS and that arresting box art. Why is this forgotten? It was on a Japanese home console system that never came to much of the world and it was game based on an anime that did not come here until the mid-1990s. 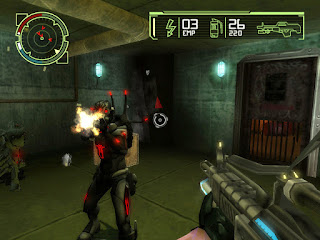 Games were you inhabit the body of a supersoldier in FPS games is the bread-and-butter of the genre and 2005's Project: Snowblind is one of those games. Designed originally to be a Deus Ex game originally, Project : Snowblind attempts more of a shooter game with elements still seen in Deus Ex. At the time of release, reviewers generally liked the game and there were high hopes for it...however, this is the story with many of the games on these lists: there was just too many FPS titles out there and Project: Snowblind was not able to survive against games like HALO and COD. 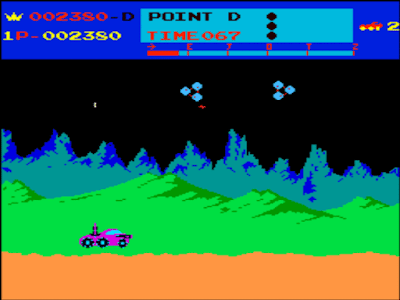 One of the classic arcade cabinets that was in nearly all arcades that haunted back in the 1980s was Moon Patrol and pumped quarters into this machine back in the day. The story is of a Lunar City police officer on a mission to clean up the Moon's Section 9 from thugs, aliens, and UFOs with his purple heavily armed lunar rover. At the time that Moon Patrol came out in 1982 it introduced parallax scrolling and gave  the arcade game a deep dramatic look to the Lunar surface. The game would be ported to every major home computer and console system throughout the 1980s with varying degrees of graphical ability. The game drifts in an out of the gaming world with new updated releases or re-release on those "greatest hits" games, but the original arcade game was outdated and replaced. For some of us, Moon Patrol was part of our childhood and early introduction to the world of video games. 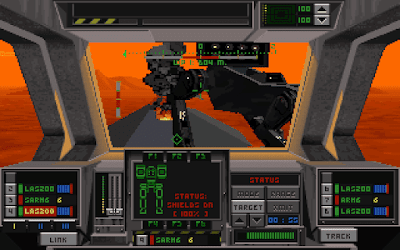 With more powerful home computers and CD-ROM drives, the long-held dream of mecha combat games came to reality and the Earthsiege series of games was an example of a time of PC mecha games that borrowed from the world of Battletech and various anime. Designed by Dynamix and published by Sierra On-Line, Earthsiege was seen several releases under its main title and some spin-off titles related to the storyline in Earthsiege, such as Tribes. Set in a post-apocalypses 26th century, humanity is fighting a guerilla warfare with mecha (HERCS) against a race of AI machines on Earth called the Cybrid. At the time of release, the first game was praised and seen as a great mecha game. This continued onto the second and the series grew. With the popularity of Tribes, Earthsiege became less and less and given the rapid pace of gaming technology, the games soon looked dated. The most direct sequel to the original mecha-combat games was 1999's Starsiege about the humans fighting the Cybrid to liberate the solar system. 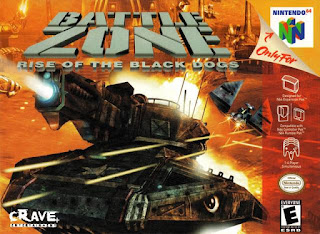 For many of us original gamers, there was the ATARI Battlezone, the vector graphic game of tank combat that was a cool arcade machine that came to us in 1980 that even got a military trainer version. In 1998, there was a military science fiction update to the old game that had the tanks going to the moon in an alternate history universe that blended both RTS and tank combat simulator. It was successful enough to warrant a sequel in 1999. The original PC game from 1998 was then changed to be playable on the N64 machine and renamed Battlezone: Rise of the Black Dogs. This was another yet example of a solid military sci-fi game on the N64 system and while the game was forgotten due to the number of titles on the N64, the Battlezone  name lives on.
7. Corridor 7 Alien Invasion (Capstone Software 1994)

As we well know, the world of 1990s video games was dominated by two Id Software games: Wolfenstein 3D and DOOM. Many game developers and publishers used those iconic and bestselling games as a platform for their own clones. Some were good, some were okay, and some were bad. One of the military science fiction FPS clones that was caught in-between the two Id Software games was Capstone Software's Corridor 7. This is a typical human vs. aliens corridor shooter based on Wolfenstein 3D with some cool vision options and aliens that morph into the background or your office desk and the ability to use alien weaponry. There was going to be sequel, but Capstone went out of business prior to much work being done on Corridor 8. Why is Corridor 7 forgotten? It was just another clone of Wolfenstein 3D released as DOOM was slaying PCs and minds...Corridor 7 looked old when compared to DOOM and her clones.
8. MDK (Shiny Entertainment 1996) 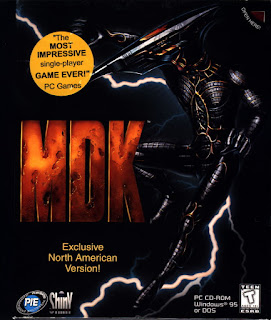 The hero of an alien invasion that was to strip mine the Earth is the janitor of a scientist in an orbital lab named Kurt Hectic. Kurt dons the Coil Suit with a built-in face sniper rifle and an arm-mounted machine gun and attacks alien city ships to stop millions from dying. This game was developed by the same studio and creative staff that developed the Earthworm Jim series and this was a step in another direction apart from Earthworm Jim. There was much praise given to MDK and there was a sequel...but it was not made by Shiny. Instead, it was handed over to BioWare and they made the Doctor and his six-arm heavily lethal dog as playable characters. During the reign of MDK, there was talk of an animated movie. However, the bright light burned out and MDK was left dark...still. There just hasn't been the push for MDK and it has been largely forgotten by modern gamers, however, there are still a number of YouTubers that give MDK much praise.
9. Hovertank 3D (ID Software 1991) 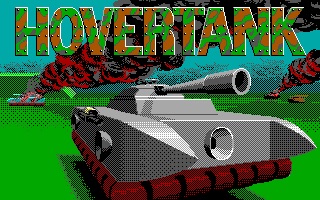 Prior to DOOM and Wolfenstein 3D, ID Software designed an first-person shooter game in 1991 in the familiar corridors of Wolfenstein that has you taking control of a anti-gravity tank and rescuing hostages during a post-nuclear war world. You and your hover tank will battle over tanks, monsters, and mutants. The game is basic and very similar across the different levels, but you can see the foundations of Wolfenstein 3D. This game was quickly forgotten due to Wolfenstein 3D. However, this could be an interesting concept that could be an interesting modern game.
10. Thexder (Game Arts 1985/Sierra 1987) 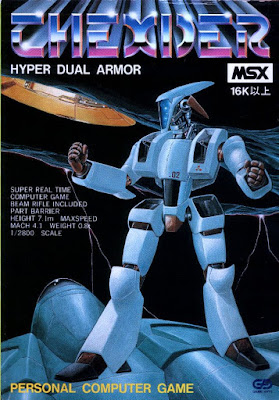 During the 1980s, Japanese gamers were able to play mecha-based shooters. One of the best was considered to be 1985's Thexder. This side-scroller game has a veritech-like  transformer fighter-to-robot mecha that deals death and destruction to its alien foes. The game itself has a complex history. Originally released in Japan in 1985 for the NEC PC-8801 machine, then the MSX, and then the NES. This was a massive seller and at the end of the day, Thexder sold one million copies worldwide. In America, Sierra Entertainment sold a ported Thexder to the range of home PC machines at the time. It was also a strong seller due to the popularity of computer gaming and mecha-based animes at the time. In 1990, the creator, Hibiki Godai and Satoshi Uesaka, developed a sequel called Fire Hawk: Thexder The Second Contact. So, if the game was popular and a big seller that does get praise today, why is Thexder on the list? Because, it is a relic of its time and for some of us, we've never heard of the game. Partly, this is due to the game being designed for Japanese home computer systems and that the game was on American computer systems as well. This did not come to home console games here in the States.
Posted by William at 16:03