The Barracks: The Four Fs of Combat 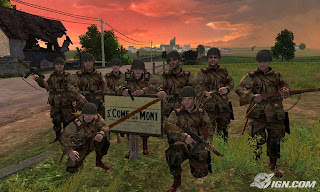 During the First World War, the great armies of Europe were bogged down in bloody trench warfare, and relayed on traditional infantry combat to push forward against new weapons of war. Then came World War Two, when one of the most effective small unit tactics was develop to counter the stagnation of the Great War: the FOUR Fs: Find'em, Fix'em Flank'em, and then Finish'em! This was used by the primarily by United States Armed Forces, specifically, the Airborne troopers. This basic small combat infantry tactic was used on the squad level, divided up into two teams: the Fire Team and the Assault Team. The idea behind this blogpost came during my experiences playing the original Xbox WWII FPS game, Brothers in Arms: Road to Hill 30 and its sequel, Brothers in Arms: Earned in Blood. Despite the graphics and some of the AI, both of these games developed by Gearbox Software, are some of the best WWII video games ever developed. The imagines for this blogpost will be from both games.
The Fire Team 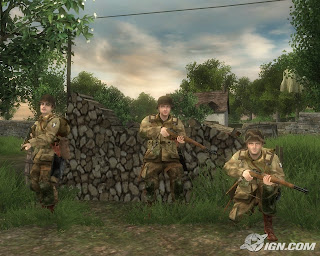 The Fire Team of the World War II would be armed with up of several rifleman wielding M1 Garands and portable machine gun, like a BAR or M1919 Browning .30 caliber, to establish a base of fire on the enemy. Within this team, is the backup quick-reaction-force (QRF) for the Assault team and would have the medic on hot-standby to treat the Assault Team(s). The goal of the Fire Team is to be the "Fix" portion, pouring on the outgoing fire to keep the enemy's heads down and prevent them from seeing the Assault Team(s) getting around the enemy position.  There also could be a sniper (with skill), that could pin down the enemy force under cover, or wound one, sucking the rest into a situation. In a modern small unit, the Fire Team would be armed with a light machine gun, like the SAW, 40mm grenade launchers, and normal assault rifles.
The Assault Team 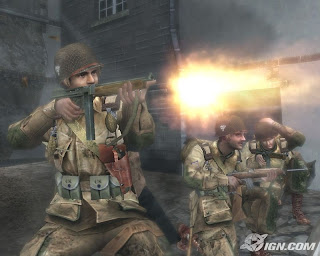 The Assault Team is the group of fast-movers, armed to take the enemy in close-quarters. During WWII, the Assault Team would be armed with M1A1 Thompson SMGs, M3 .45ACP Gease Guns and/or M1A1 Carbines, or even Shotguns. Most of these Assault Team(s) would drop their packs, and heavier kit to move fast, to close in on the enemy, and kill. Since most infantrymen use the same weapon, like the M4 or the AK74, the Assault Team in a modern sense would flip their asaault rifles to fully automatic mode.
FIND 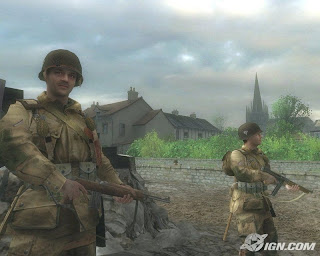 During patrol of the area of operation, the good guys are looking for the bad guys, and surveying the region for good fighting positions. This one of the most dangerous times for a small unit. If the "Find" portion last too long, the soldiers become more tired for walking and waiting for something to happen...their sharpness can wear down, and in urban enivorments, there could a sniper, IED, or even enemy force in ambush position for the good guys. Once the enemy is located, the two teams, Fire and Assault must quickly find cover, setup, and use the surrounding terrain to their advantage.
FIX 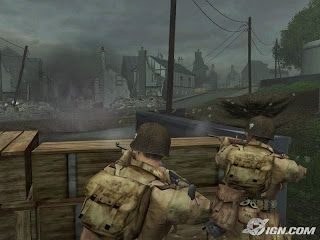 During this phase, the Fire Team, along with any QRF reserve force is laying down lead at the enemy, trying to get their soldiers pinned down and panicked. The good guys are using their light machine guns, assault rifles, battle rifles and even sniper rifle, to keep the enemy's head down, while the Assault Team readies for the push. This portion of the Four F's could unitize artillery, CAS, or even mortars to force the enemy into a defensive posture, and unable to move.
FLANK 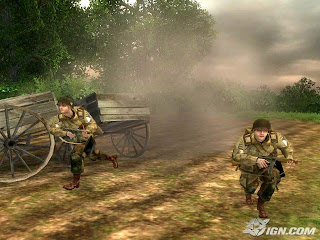 While the Fire Team has established a base of fire, pinning down the enemy from moving from their current position, the Assault team is moving around the enemy, looking for a good spot to rain down fire on a their position. This maneuver depends heavily on the how good recce of the area-of-operations for the Assault Team to find the pathway around the enemy position. One of the more helpful tools modern warfare for this phase is the UAV, it can provide real-time intel and the local topography.
FINISH 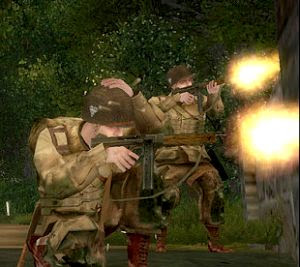 When it all comes together. The Assault Team is in position to either rush the enemy position with all-guns-blazing or attack them from cover, using grenades, flash-bangs, or even direct fire.This could mean calling artillery/air strike on the enemy, or using their own guns to finish the fight. If the Assault Team rushes the enemy position, then the Fire Team needs stops their base of fire, which would mean good communication between the two teams at all times. If everything is right, the enemy dies, and the two teams reform, re-arm, and return their mission.
Does this small unit tactic still work? 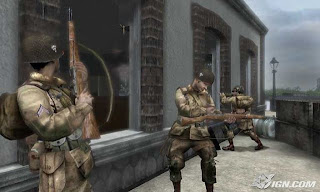 Back when I first starting playing Brothers in Arms: road to Hill 30, I decided to try out the Four F's during a paintball game at DFW Adventure Park. The group that I was with agreed to the experiment, during a speedball game, we met with much success. The other team, mostly rec players, was routed from their backfield position, with two flanking assault teams made up of about three players. I would later learn, that most professional paintball teams use this basic foundation tactic of small unit combat, with names like Backplayers, mid-players, and the frontmen. In the real world of bullets and paint, not paint and bruises, the basic element of the Four F's is still taught in basic, with some of the same titles, but with leapfrogging and overlapping fields of suppressive fire with LMGs and 40mm grenade launchers.
Posted by William at 10:28