FWS Topics: The Voices of a Distant Star 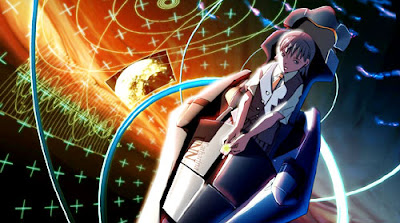 Does military science fiction have a heart? Is it all war, blood, and mud, with cool battle suits? My wife recently told me that MSF seems rather lacking in the emotions department: "it's all boys with their guns playing war." To counter her belief, I recalled one of the more emotion-filled military science-fiction works: the Japanese OVA and Manga The Voices of a Distant Star (Hoshi No Koe). This little MSF work was created in 2002 by Makoto Shinkai and artist Miz Shara. It was original release has a manga graphic novel in 2002, then an 25 minute OVA the same year, then later in 20004 as magazine serial. Both the Manga and OVA are available in English in the US. Makoto Shinkai has gone on to pen other Anime projects, like the beautiful The Place Promised in Our Early Days. It is my personally belief that the creators of the Voices of a Distant Star read or was familiar with Joe Haldeman's the Forever War, there seem to be a number of connections and theme running through both.
The Story (Contains Spoilers!) 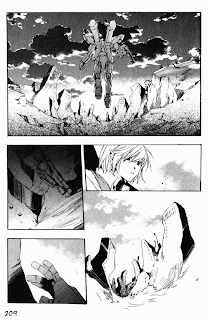 Like many Japanese military sci-fi stories, there is mecha being crewed by underaged pilots, however the Voices of a Distant Star puts a good spin on this overused plot element to forge a tight story told mostly in big art panels and small sections of text. In the story, humans found alien ruins on Mars in the fictional Tarsis Plateau, (which mostly likely is a misspelling of the real Tharsis region) in 2039. During the multi-national space mission to explore the ruins, an alien race shows up and kills the investigation teams, sparking humanity first interstellar war. The mecha, called Tracers, that were original remote tele-presence driven robot used by the Martian extraterrestrial archaeological teams, were repurposed for the newrly formed United Nations Space Force (seen in the OVA as 'UN SPACEY', the same as in the Macross/ ROBOTECH universe). 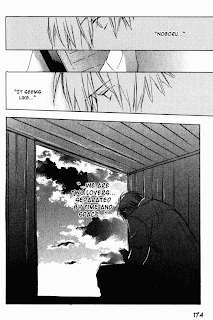 The story opens eight years later, when the UN Spacey is readying a strikefleet to rid the alien threat in our system, as 15 year old  middle school friends Mikako and Noboru, receive their government test scores to determine if they can join the military expeditionary force. Only Mikako gets a high enough grade to join the mecha pilot program, leaving Noboru behind to face high school alone. For the bulk of both version, Mikako fights across our solar system against the Tarsians,while the two exchange text messages. Mikako and Noboru, once good friends, drift apart as the two have different experiences,and her ship goes deeper into space, causing the text messages to take more time to reach Earth. 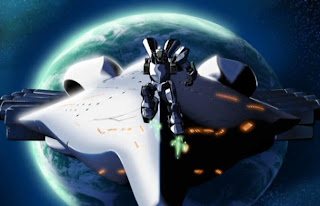 Once the operation moves to the Sirius system for an offensive against the Tarsis home system, eight years have passed on Earth due to the faster-than-light travel, while she is still sixteen, Noboru is twenty five. It was during the climax battle, that Mikako sends Noboru the message that she loves him. The manga ends with Noboru signing on to the UN Spacey mission to rescue her damaged FTL carrier, the Lysithea, in the Sirius system, all so that they can be together.
Of Tracers, the War, and the Tarsis 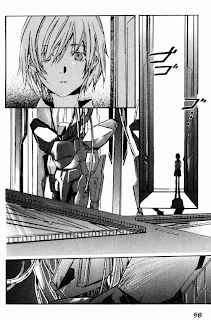 The soul of the story in both the Manga and the OVA, is not the hardware, but two lovers seperated by lightyears. The Terran giant "Tracers"mecha warriors are the primary offensive weapon systems used against the alien Tarsis. These Tracers are not that remarkable in the realm of giant robot anime, but what is, this the way they are controlled. Makoto and the other "Special Agents" pilots control their Tracers via a remote low-gravity tele-presence booths onboard the Terran FTL carriers (about 72 Tracers per Carrier).
Some of the combat scenes in the manga and OVA indicate that there is some sort of feedback from the mech to the pilots, but it never says for sure. Either work explains why the UN is recruiting middle schoolers for mecha pilots, but the best guess is it as something to do with time dilation and/or the Japanese trends of very young pilots and soldiers that typically runs through most military sci-fi anime/manga works. 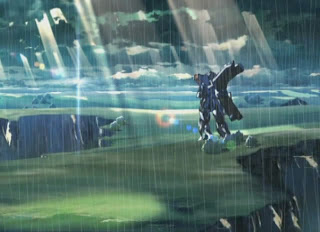 The war itself is told in only a few pages of the manga, once again, the focus is not on the war, it's only a backdrop for the slow-boiling love story, and it shows.
That is one my only issues with the Voices of a Distant Star, the war portion is weak along with the completely un-military portrayal of the UN Space Force organization.  There is even a lack of a basic uniform, and many of the characters seem to wear their school uniforms! This weakness is also applied to the expeditionary force's alien menace, little or nothing is shown or told about them, aside of a few war vehicles.
Why I love the Voices of a Distant Star 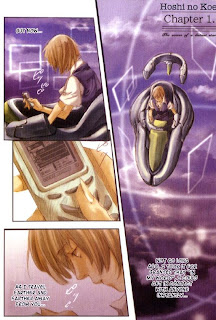 Sometimes, simple is better, like the iconic shape of a Porsche 911, plain black t-shirts, white dress shirts, leather jackets, and the action of an AK-47. All of these are simple, but pure, and proper...and that is the way I feel about the Voices of a Distant Star. While Mr.Makoto Shinkai underdeveloped the war between Earth and the Tarsis, he nails the long distance relationship emotions with heartstopping reality, and not just in words, but in the art and environment. This forms a work is honest, real, and compelling.
More over, it takes current cultural elements, like texting and showing it living in the next generations, but still retaining elements of everyday society (like going to school, sports, uncertain about your future) that anyone can relate to. This extends to the middle school friendship/love that exists between Makoto and Numboro. It is not a desperate adult love affair, but more realistic given their ages, something that starts off in one way then morphs into a burning love affair. I've experienced this during my middle school years myself, not the-fighting-in-mech-suits-in-space thing, of course. It also helps that this Japanese work reminds me strongly of the Forever War, and how to take some of the concepts behind that 1974 novel and places them in a different setting by a different culture.
Here is a music video that takes elements from the OVA and manga:
On a personal note 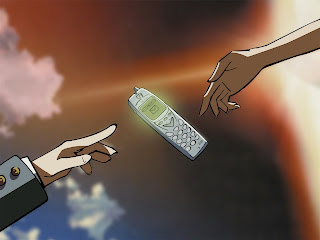 For me, this simply sci-fi story of a long distance relationship hit home, speaking to an older version of myself, because I lived part of this story, and from the same points-of-view as Makoto and Numboro.
In 1996, I seriously dated a girl named Becky Rhodd during my first year of college, and our relationship was borrowed time from the beginning. She had enlisting in the Army, and was leaving in late summer, making the relationship desperate, passionate, and terribly romantic. When she left for basic, our relationship altered in similar ways to Mikako and Noboru, confined to written words, while she was learning to be a soldier, I was in college, hanging out, and longing for what was and what would be. While I did experience distance, it was nothing compared to the the horrors of time dilation. Unlike, the love story in the Voices of a Distant Star, mine was a sad final ending, we broke up and saw each only twice in fifteen years, however, both of us are happily married with children.
What should be done with the Voices of a Distant Star

This work has great bones, that could be expanded without destroy the original favor or concept, if it was done correctly. While this little simply story is amazing, I would love to see more from it, along with a proper ending, like the Forever War did with Marygay and William Mandella. Due to the works being from Japan, there are elements that simply do not translate well to American audiences, even ones, like me, that understand Japanese culture. Altering the work slightly and increasing the depth, I could see the Voices of the Distant Star being the solid foundation of a great sci-fi film, that could draw from some of the elements of the excellent 2002 Steven Soderbergh adaptation of Solaris.
LINKS: 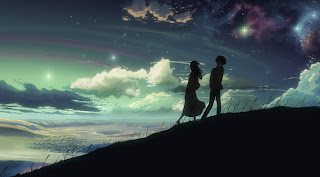