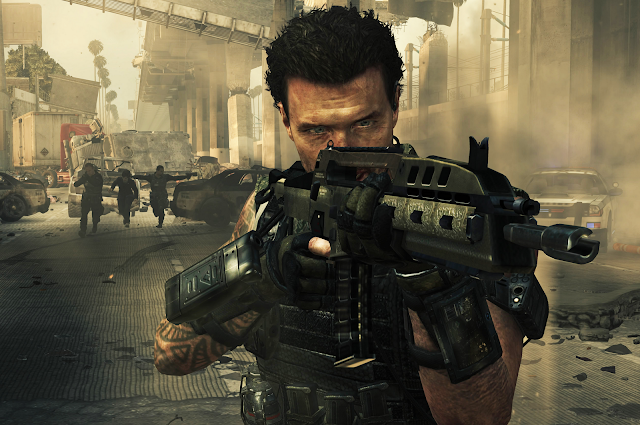 Recently, while watching the announcement trailer for Call of Duty: Black Ops II, I noticed that the main assault rifle for the game is going to be the pattern more or less directly off of the canceled H&K XM8  assault rifle from 2005. This, not the only near-future MSF work that has mined the US Army canceled M16 replacement, and this got me to thinking (never a good thing), why do so many near-future MSF works feature this weapon? So, I decided to write a blogpost and gather the opinion of anyone that wishes to comment below. 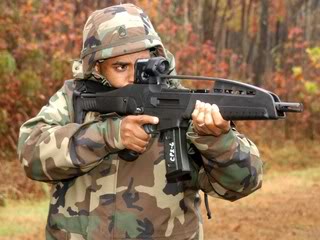 The XM8 started life as the kinetic kill portion of the experimental XM29 OICW. The majority of that gun was the slighting/sensor system that was tied to the 25mm bullpup grenade launcher, the smaller portion was the underslung 5.56mm lightweight "kinetic energy"carbine that was mechanically related to the G36. While the XM29 OICW was formally cancelled in 2004, H&K had already taken the 5.56mm "kinetic energy"carbine and started to development a family of lightweight next-generation weapon system for the the US Military. 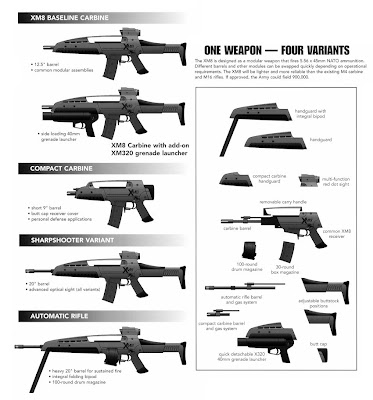 Much like the original AR15 concept, the XM8 carbine was going to be base for several other weapons, everything from a PDW to a light machine gun, with a few changing of pieces, some call this the "Lego" approach to firearms. This concept was applied to the H&K G36 and the FN SCAR.
Looking back at the XM8, H&K was developing some features that would pop up on later guns, like the integrated red dot scope, high-end composites, and ambidextrous switches. One major feature that Heckler & Koch got wrong was abandoned the typical Picatinny rails for attachment points, forcing the user to use only those attachments that could use the attachment points.Everything seemed to be falling into place for the XM, because at the time, it was assumed that the M16/M4 was on the way out, especially when the M4 was jamming in Iraq due to sand. November of 2003 saw thirty prototype XM8 delivered to the US Army for testing, which opened up a heated political debate. Pressure on the Hill and the Pentagon was coming from all sides, especially from Colt, who wanted to keep their contract. Other arms makers, hungry for the billions of dollars that would come their way if their assault rifle got the contract, called foul, forcing the US Army to open up the field for testing other weapons, like the H&K 416 and the FN SCAR. By 2005, the XM8 was dead, and the US Armed Forces kept on using the Colt M4, while the SOCOM began testing the FN SCAR.

Why was the XM8 cancelled and It's Life After Death 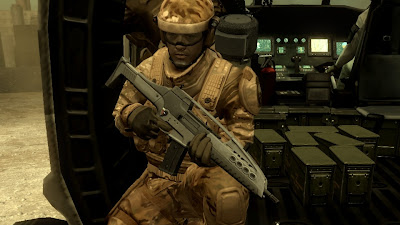 Some say that H&K XM8 was a victim of infighting, political favors, bribes, corruption, and closed minds. That Colt put pressure on the government to keep the gun that American soldiers used to be made by an American company, of course, the XM8 would have been made in a plant in Georgia. This draws similarities between the fight over the XM8 to the rigged Army trials of the  M14 and the M16, or the heated contest between the Sig Sauer P226 and the Beretta M9. It is sad really, firearm companies and the people in power do not seem to remember that the assault rifle is the best friend of every soldier that puts their ass in the grass, and that system should be not just good, but great. It reminds me what Ripley said in ALIENS: "You know, Burke, I don't know which species is worse. You don't see them fucking each other over for a goddamn percentage" Other sources point to poor performance in real-world testing in Iraq around 2004/2005, combined with the lack of standard rail systems and non STANAG magazines. One of the best reasons that I've read was that the XM8 was not a giant leap forward over the Colt M4 for the price tag. It was also rumored that current issued SAW/Mk.46 performed better than the XM8 LMG, and some rumors say the same over the 'sniper' variant as well. So, it really came down to why spend money if you do not have to? 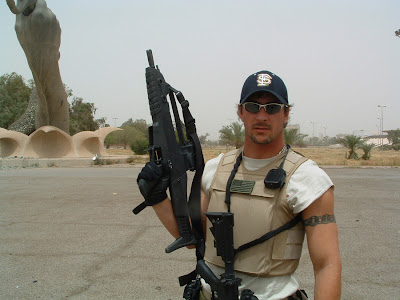 By 2005, the issue was more or less settled, the XM8 was official dead, H&K moved on to selling the 416/417 rifles. However, its story was not done. The XM8 of course lived on in shooter video games, like Ghost Recon and Battlefield (oddly, COD did not put the XM8 in any of their games until Black Ops II), and some Airsoft and Paintball companies created rec-warfare copies. However, the real-steel XM8 didn't just roll over and die after the US Army cancellation in 2005. A few made into active service in Iraq with a H&K maintenance team. Blackwater contractor and former SEAL Chris Neidrich was photographed with such an XM8 carbine around 2003/2004, just before he was killed. The most famous user of the XM8 after its demise was none other than General David Petraeus, who carried either an XM8 PDW or carbine during his time in Iraq. General Petraeus had been impressed with the weapon during its Army trials, and this speaks very highly of the weapon if someone like Petraeus is willing to use it.

My 2cents on the XM8

﻿﻿﻿﻿﻿﻿﻿﻿﻿﻿﻿﻿﻿Like most people, my experience with the H&K XM8 was limited to video games and Airsoft/Paintball copies, but it made me see another reason why the XM8 was sent out to pasture. During the fever over the XM8 around 2005, when Ghost Recon 2 made it the ultimate gun in the game, I badly wanted to get my hands on the paintball copies because you were really cool if you took the field with one. When I finally got my hands on the Smart Parts SP8 and Blackpoint Engineering JCS MKX8 in late 2006, 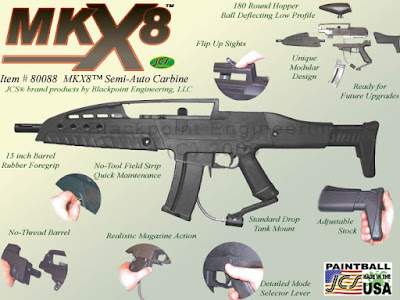 I was disappointed. The gun's ergonomics were much different than the M4 clone I was using at the time (The USA PP Viper M1), the center body of the gun was high, making it seem like it dominated my vision, especially with a mask. I could not see using this over the M4 design. Since I did have a choice on what Paintball marker I carried, as long as it fires .68,  I chose the Colt Commando, due to its size and ergonomics, which beat the XM8 clones at the time. I would guess this could a reason behind the cancellation of the XM8 in 2005, that the weapon did not handle well, which I learned when I bought my pistol, is one of the more important considerations for a combat weapon. 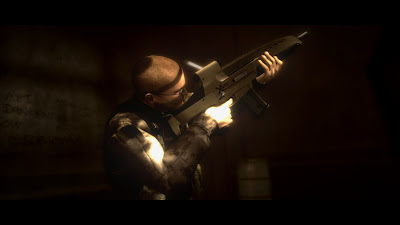 It would seem that once the H&K XM8 project was canceled in 2005 that would be it for the weapon system. But, that did not stop this futuristic modular weapon system from gaining populating in a number of video games...but why? For several years, around 2004/2005, it looked almost certain that the H&K XM8 was going to bought by the US Army as the replace the aging AR15/M16 platform, and video game developers were trying not to look dated, latched on to the next big assault rifle, which was the XM8. 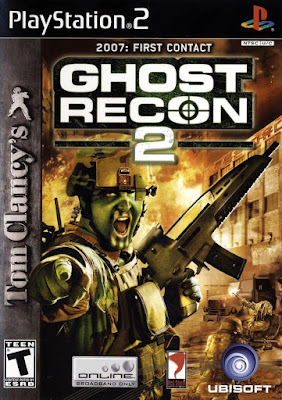 This was not just limited to near-future military science fiction shooter video games. Even paintball companies, like the Smart Parts and the Blackpoint Engineering, got into the act with their own .68 ball firing MILSIM markers. Sadly, just as gamers like me, were pumping virtual rounds with the XM8 in vitural battlefields, the US Army canceled it. But, gamers had already experienced it, and came to perceive this canceled modular weapon as (still) the next big step in military small arms. It made sense for a near-future video game series, like Ghost Recon to place the XM8 in their near-future games to reinforce the fact that this was the future, flying in the face of the cancelation. Once that trend was established, gamers expected to see it, developing the XM8 as a trope of modern military shooter video games, allowing the long since dead XM8 to appear in a starring role in Call of Duty: Black Ops II. This also lead to game designers riffing off of the base XM8 design to model their own futuristic KE assault rifles. If anyone else has an idea of why a canceled and never-combat-fielded weapon has made into so many shooters, please comment below and let me know.

Some Examples of the XM8 in MSF 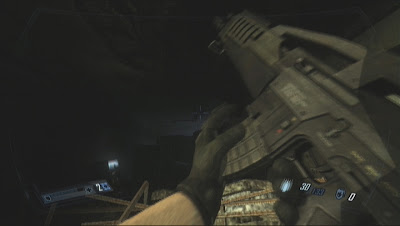 The primary assault rifle of both friend and foe, the Pattern PK470, in the F.E.A.R. II: Project Origin is similar in design to the XM8, and the gun is dramatically cocked with a firm 'smack-my-bitch-up' action.There isn't much to say about the Pattern (what a lame ass name for a gun company!) PK470, it shoots, it kills, and it rocks in slow-mo.

The Various XM8 from the Ghost Recon Universe 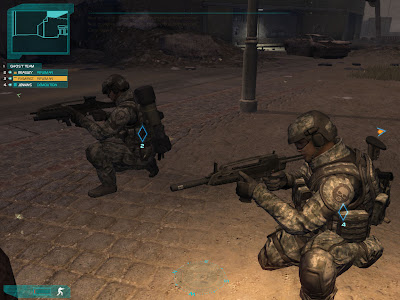 The SCAR from the Crysis game series 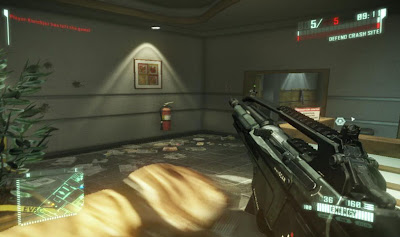 According to the Crysis history of their XM8 clone, the Superior Combat Assault Rifle (SCAR!), it was adopted by the US military in 2018 and chambered the 6.8 SPC cartridge over the 5.56mm. By the time of the Crysis 2 video game, around 2023, the SCAR and its Special Force variant, the SCARAB, chambered the HV 4mm round, but the weapon's magazine is still quite bulky.

The XM8 from the Battlefield game series 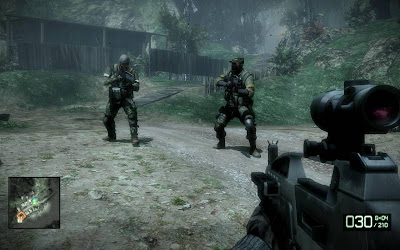 Much like the Ghost Recon series, the Battlefield Bad Company game tells a story of a near future US Army that fields the H&K 416 as their standard weapon and H&K XM8 as the standard weapon of the Legionnaire Mercenaries. In the second Battlefield Bad Company game, the Bad Company team appears to be using the XM8 as their standard assault rifle. The third console game, the Battlefield series returns to a more realistic military unit with the USMC, and using a more typical assault rifle, the M16A4.