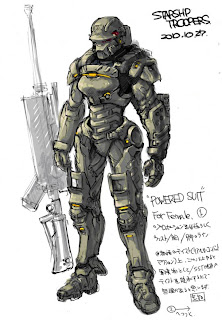 Well, we FINALLY have a teaser trailer for the upcoming CGI animation SST film, Invasion. The teaser uses some lines of dialog from the original book(!) and shows us a glory sequence of the new powered armor for the film, however, the only shot of a bug is the typical warrior we've seen since 1997. This looks better than I thought and I now have higher hopes for it. It is uncertain how much of the 1997 Verhoeven universe will make into the new film, or if Invasion is a complete reboot of SST. But, if's got bugs vs. powered armored soldier, you can count me in!


Here is the teaser: