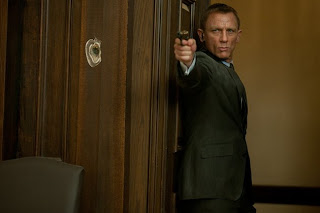 This morning, the latest Bond film, Skyfall, had the first  trailer released, and it appears that the newest Bond film will be much darker than any previous. While Bond films have little or nothing to do with Military Science Fiction, I've been a Bond fan since conception, grew up with watching the films over and over, but the formula soured over the years, especially with the Pierce Brosnan films. While Bond was riding around in cloaked Aston Martin's, Jason Bourne was out-Bonding 007 with every film, forcing the holders of the Bond name to reinvent the character into a much more hard-boiled character. I personally believe that the most recent Bond is the best, and has the best films. But, could Skyfall be the end of the Daniel Craig as 007? From the trailer it feels that way, especially, it seems since the new Bond character is under a great deal of pressure since 2006 reboot, I mean, does 007 sleep? It is my hope that Daniel Craig stays on to be 007 a few more films...after all, look at what they are about to do with the Bourne films...Jeremy Renner as a new Treadstone agent...really?!

Here is the treaser trailer: