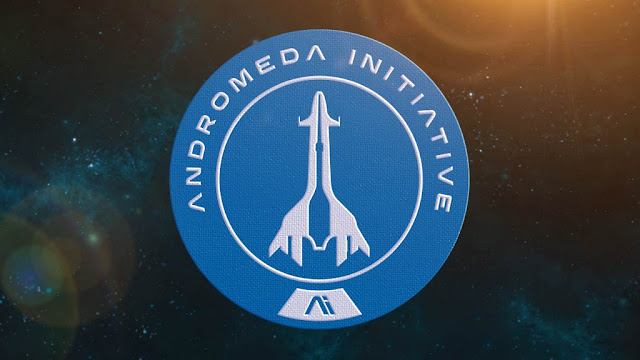 Among the icons of military science fiction are some legendary video game titles that have reinforced the fans and forged new ones. One of the most beloved was BioWare's Mass Effect series that spanned across three primary games, a number of DLCs, books, and comics. It was a beloved universe for its fans that caused them to cosplay, wear N7 gear, and even tattoo themselves. When 3rd and final Mass Effect game was released in 2012, we fans wondered if this was indeed the end of the journey after the mishandling of the ending to the trilogy. Then came happy news of a new game that was a fresh start with new characters and a focus on exploration in a new setting. When 29th century centered game was released in March of 2017, there was understandable disappointment and many fans felt deeply betrayed by EA and BioWare. But it is worth the hate and loathing? I decided to embarked on the journey to the Andromeda galaxy to see if it was a betrayal of the heritage of the Mass Effect games or a merely misunderstood entry into the franchise. 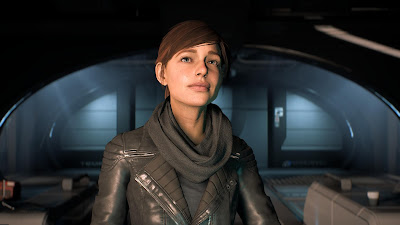 There is much made about the broken nature of ME:A and its ugly or underwhelming graphics...but under all of the noise and press is a semi-solid game that does delivery a long, relatively enjoyable campaign that becoming more and more rare these days. Overall, the concept of the Andromeda Initiative expedition to the nearest galaxy is maybe something that has been seen in sci-fi, but it a great way to separate this new ME game from the previous titles. In addition, Ryder is not Shepard and nor did I want her to be. Instead, Ryder is an unsure pathfinder that has us learning along side her as she attempts to find the "Golden Worlds" for the Andromeda Initiative to achieve settlement and survival. 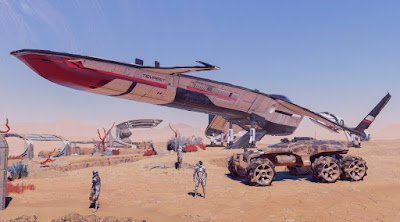 Then there is the good crew of the explorer scout ship Tempest, which is overall an interesting bunch despite the dead doll eyes thing and my Sara Ryder put the moves on Scottish hottie Suvi; which was enjoyable all the way around. The combat experience has been tightened on your end along with the off-world off-road driving experience with the unarmed ND1 "Nomad" 6x6 ATELV, and even the exploration of the new alien solar systems that was graphically impressive and more dynamic visually. Of course, given that it does possess Mass Effect DNA allows us to visit one of our favorite universes 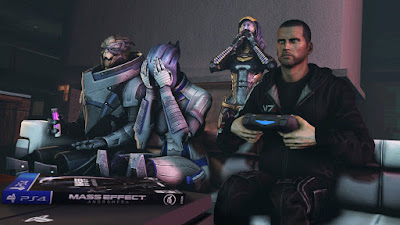 Andromeda did not have an easy task when following the other games; there was a lot to live up to with the Mass Effect trilogy storyline, the setting, the aliens, and the iconic characters. To set the events, characters, and story, BioWare transplanted a portion of the Milky Way galaxy to the Andromeda galaxy and hope there is no organ rejection. While I celebrate the boldness of the decision and the attempt, it was not their best effort. Every piece of what made Mass Effect so iconic; so good are muted and dulled in Andromeda. 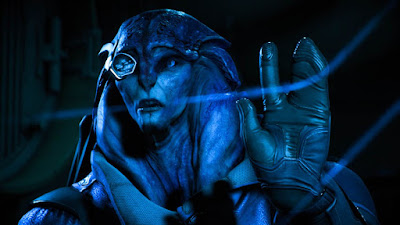 The central struggle between a portion of the Kett and the Angara is just okay, but lacks the compelling nature or a sense of urgency of other conflicts seen in the Mass Effect universe. These two alien races were also just okay, but pale in comparison to the original Milky Way aliens of the Mass Effect trilogy. Both the Kett and the Angara were collective not as interesting as some lesser develop alien races in the ME trilogy like the Hanar or the Volus. One of the best pieces of any ME game is the alien races and this is one of those factors that degraded the experience for many of us. That was coupled with some of the lackluster dialog, pathway chooses, and some of the unrealistic facial animations all make ME:A sorely lacking in the basics of what makes Mass Effect what it is. While the combat has been improved; there is a central element that seems lack from Mass Effect 3…the guns. I was continually disappointed in guns of the Initiative, the Exiles, the Angara, and the Kett along with the upgrading experiences of the weapons verses the 3rd game.

Even comparing M-76 Revenant across the games leaves me with the impression of it being weaker and less dynamic than the Revenant seen in other games with tons of wasting ammunition. Then there is the difficulty of ME:A. I never died due to the hostile gunfire during the finale mission and my only combat deaths throughout the game only came when I embark on a direct action mission to clean out the “flophouse” on Elaaden. Other than those, my Sara Ryder’s death came at the hands of the hostile environment or failing to make a jump. One of the most notable new features of the game was to be the exploration of various exoplanets in the Heleus Cluster. This was cut back in the finalized game to just a few worlds that were to be made habitable by the actions of the Pathfinder. While each planet is difference, the dangers and solutions are not. I don’t know…I just became bored by the process after the 3rd planet. That is the thing with this game…it is disconnected and while I am not sorry for paying or playing it, I doubt I will replay it like I did with any other of the Mass Effect games. Oh, and the ending is rushed and anti-climax... 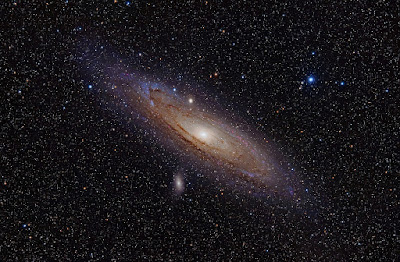 It would be assumed that the "ugly" portion of this review would be the underwhelming graphics of this game. Yes, the visuals are not the best feature of the game, but that is not the worst part of the game...far from it. ME:A was to be a more exploration focused Mass Effect game rather than tied to the overarching story line presented in the original trilogy. It was a chance to begin again in golden land of opportunity and adventure in the Andromeda galaxy. It was promised by the ME:A team that Ryder & Company would be exploring procedurally generated worlds on a unseen total. Yeah...that didn't happen. It didn't even happened to the level of the other Mass Effect games. Instead, ME:A feels like wading pool to the Andromeda galaxy, especially when it comes to the sentient alien races. 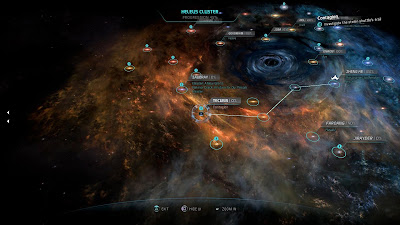 Your Ryder and her Pathfinder mission are confined to the Heleus Cluster where just two native sentient alien races inhabit: the Angara and the Kett. While the confinement is explained, to a degree, due to the resource intensive nature of FTL flight (Element Zero/No Mass Relays) and the critical supply issues facing the Andromeda Initiative. While the exploration is seemly more in-depth that the previous entries into the series, after the 3rd world, it seems repetitive and hollow. So, the Tempest is stuck in the Heleus Cluster as you make the rounds to hostile worlds to turn on the ancient aliens terraforming machines. Wash and repeat. 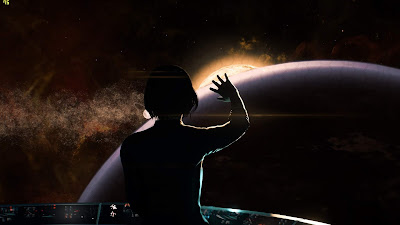 However, that does not explain the native lack of alien races. If the worlds had to be cut down than why were the alien species? The original games featured a number of interesting and well-designed alien species that filled out the fictional universe that did not propagate into ME:A. The last UGLY point is that the originality of the writing is sorely lacking. Up until this game, the MASS EFFECT games could be counted on to have some of the best writing in sci-fi video games. Hell, even in all of sci-fi. But, that did not happen for this game. The originality of the central plot is typical and when Stargate Atlantis or Gene Roddenberry's Andromeda beats you in originality, design, and setting; you are simply doing it wrong (confession: SG:A is my favorite Stargate series!). Even if the graphic were not up to 8th home video game console generation, the writing should have been and it wasn't. That, to me, is the biggest crime/sin of Mass Effect: Andromeda and it should have been job #1 for the team considering the mantle of responsibility they had to us fans and to the brand itself. BioWare screwed over one of their best franchise and wounded the fans.

Should You Play Mass Effect: Andromeda?

That greatly depends on how much you are a Mass Effect fan. If you are a die hard fan of the BioWare games, than it is mostly likely that you alright bought the game and relished in the good/bad/ugly aspects. For those that liked the original games, but stayed away based on the reviews, it maybe time to consider picking up ME:A for a discount. There are echoes of the original Mass Effect universe here and some new elements paired with the bad aspects making it an uneven overall experience. Still...I enjoyed playing it and found it to be worth the investment I made in the game in both time and money (save for the end). I think it is time to give this unloved and battered game a chance because we know that EA is not.

Something Odd I noticed… 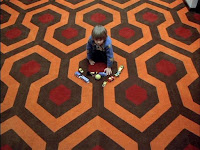 My Sara Ryder character had the geometric tattoo on her neck in a muted redish hue, and I not figure out where I had seen the pattern. Then I saw scene in The Shining and the hotel carpet is a match to the pattern! Did the developers at BioWare include this as a Easter egg? 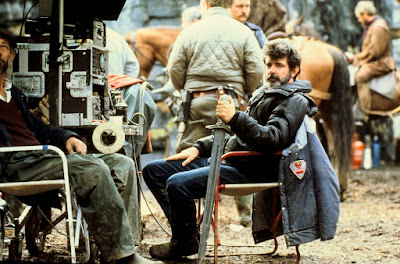 For nearly 20 years, George Lucas has been teasing the fact that he had the collective Star Wars saga laid out in that mythical notebook codex. Then in 1999, we finally witnessed the first installment of the fabled Prequel trilogy and many of us were left stunned and shocked. Was this the long-held vision? When the Prequels were completed in 2005, many of us believed that Star Wars was dead and gone with these shitty plastic films as the final nail in the coffin. Since those days, I've wondered what was the original vision of the Prequels back in the 1980's and was there any truth to the rumors of Episode I being in pre-production in 1988? FWS will answer these questions in the next blogpost?
Posted by William at 09:33