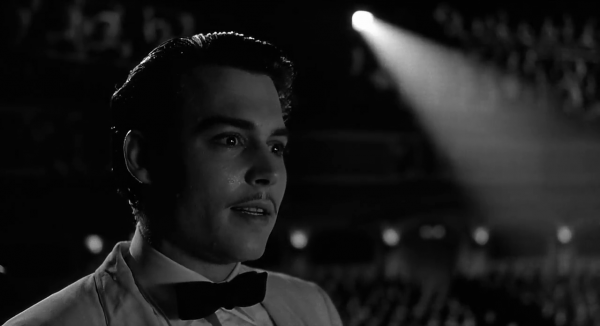 Next week, FWS will be reviewing the low-budget military sci-fi gem, Hunter Prey and I thought in perpetration for that blogpost, I would put my list of my favorite B/Unrated films.  I love films. It has been that way my entire life. From watching Siskel and Ebert every week, to raiding the video store, making my parents drive to Tulsa to go to a better theater  or watching cable late at night, movies have surrounded my life. In 1997, when I was at TCU, my Introduction to Film teacher told me I had talent and a future in film, nearly causing me to move to Dallas for film school. During this period, I helped on a few very low-budget films and scripts. Even today, when I write books, it's a very visual experience, and I imagine my books as films. Despite this love of films, I was never much on renting shit-films, and I generally only rented good movies. However, not all scripts can be directed by Francis Ford Coppola or be funded by billion-dollar studios. After all, there are the Kevin Smith's and Quentin Tarantino's of the world... 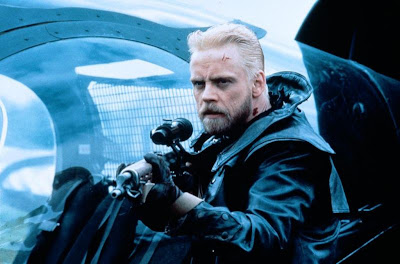 While Mark Hamill,  Sir Ben Kingsley, and Bill Paxton are known for much more well-received films that this lost 1989 dystopia road-movie about bounty hunters, lost civilians, rouges, and a murdering British androids. However, they all give such great performances that allow Slipstream to be endearing in the minds of those that have seen it. While portions of Slipstream are disjointed and there are doses of 1980's cheese, Slipstream is just one of those movies I love, and is my favorite B-movie of all time. If you are a fan of Mark Hamill, than this a must-see for his role has Tasker...makes you think that Luke would have been cool if he had joined Vader! 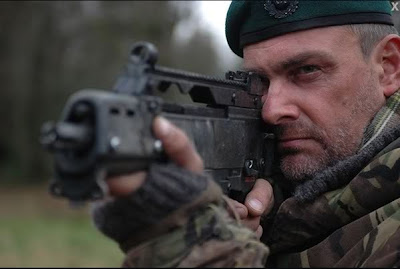 If there is a Citizen Kane of Nazi-Zombie movies than 2008's British-made The Outpost is it. This is one hell of a film, complete with good acting, correct military tactics, well-crafted story, and interesting Nazi Zombies with an original origin story. I was unsure of this film at first, especially since I'm not much for traditional horror flicks, but it has guns and Nazi-Zombies, so, I was onboard. I was also impressed by the level of dialog presented in this film, along with the characters themselves. The Outpost is one damn good film that has gone on to spawn a sequel and a cult following. See it if you haven't! 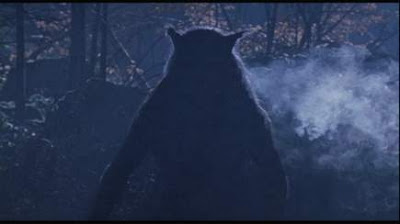 If there is a Citizen Kane of modern Werewolf movies than 2002's British-made Dog Soldiers is it. While on a training mission in rural Scotland  a small unit of British soldiers encounters aggressive werewolf-like animals that tear the unit to bloody pieces. This is one of those films that is an honestly great horror film that makes the most out of its limited budget and great script and good actors. This film has a line I still repeat when I play Xbox Live: "I hope I give you the shits!" Epic.

Next week, FWS will be reviewing this gem of low-budget MSF films. However, in the meantime, I can tell that Hunter Prey is a great sci-fi film with a dense story, good acting, and shows promise for the entire genre. We need to see more of this type of work in MSF films. 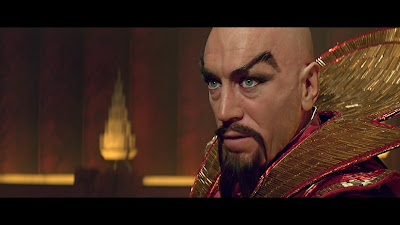 This movie is sooo cheesy that it should have been served with a side of tortilla chips and sold at Football games! In 1980, Dino de Laurentiis attempted to bring the old Flash Gordon of the 1930's into reality, gather some of the best actors of the time into a campy space opera film that is fun and does honor the style of the original films and cartoon productions. I watched this movie a great deal back in the early 1980's, because we had cable and HBO ran into the dirt! I watched it prior to this blog entry...and...well...you can never go home again. However, the hawkmen assault on the Imperial Warrocket Ajax is still every bit if campy greatness! If you've never seen this mega-flop of a sci-fi flick, rent it or steal it, pop some pop-corn, grab an Jack 'n' Coke and prepare yourself for one of the best made B-movies of all time, that comes complete with the single best soundtracks of all time...because it was done by mother fucking Queen! 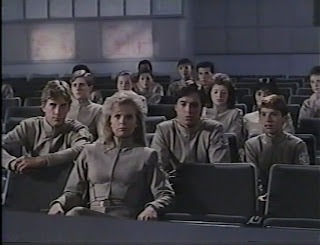 Hokey, corny, and it's all 1980's Disney glory, it was Earth Star Voyager! This was a two-part made-for-TV-movie aired on ABC during their 'Wonderful World of Disney' Sunday Night programming. Back in the 1980's, Sunday was normally a night for networks to air their family friendly movies and programming. With the success of Star Trek: TNG, Disney and ABC wanted a weekly science fiction that would appeal to families and encourage science education, and thus, Earth Star Voyager was born. Taking place in the year 2088, Earth is dying, and a probe has returned data on a possibly habitual world called 'Demeter' in orbit around the fictional star of 'Berenson's Star' that lays some 20+ light-years from Earth. 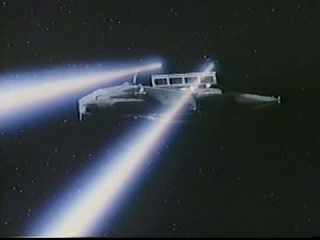 The government starts on construction of a exodus fleet that will transport the bulk of humanity to Demeter, which will take 40 years to complete. The space academy took their best and brightest to crew the new semi-FTL explorer vessel, the Earth Star Voyager has the round trip would kill an older, more experienced crew. But, the mission to Demeter is not what without perils. I watched this in 1988, and I was the right age to be excited over this TV movie. At this time, I wanted nothing more in life than to be an astronaut and if someone had offered me a mission to a distant star, would have leaped at it like a spider-monkey! This has never been released on DVD, and only international release on VHS, but nothing for the America...I guess Disney was embarrassed by the film, and tries to pretend that it does not exist. Every once and while, it appears on youtube (sometimes in English) and is taken down quickly. I've wondered if the 2009 Virtuality pilot-movie by RDM does not contain some DNA from Earth Star Voyager. 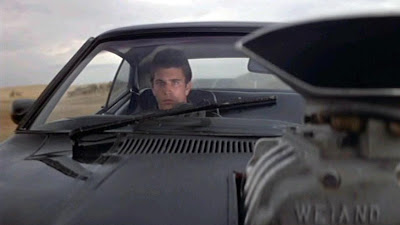 Okay, I actually saw Road Warrior first, and there were details I wondered about until I caught the 1979 origin film one late night on TBS....and boy, was I not ready for what this movie showed me! While Road Warrior is a brutal, stark, and violent film, it didn't depress me the way Mad Max did...but I liked Mad Max and upon later views, the film bewitched me. I must confess that when I pull this one of the archives, I skip around, and avoid a bulk of this odd, twisted, and violent film. There are few films with the power and talent on display in 1979's Mad Max, and the sequel's post-nuclear wasterland story line came out of left-field when compared to the original. Oh, and Max Mad has the best movie car ever! 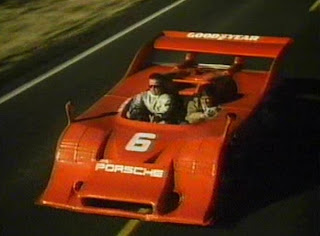 In the far-future, there is a nation-wide pandemic, killing millions. On top of this, the global supply of fossil fuels is exhausted, forcing the new, more draconian American government to outlaw fuel-burning vehicles, replacing them with green public transportation and electric cars. During this mess, California breaks away, and former ace race-car driver, Frank Hart (Lee Majors) loses his wife and child along with his career. He is assigned to be the PR man for the mass transit system, and in public, he tells the public about the evils of privately owned cars, while he restores his 1972 917/10 Porsche (Replica) race car, and blasts out of New York City, bound for Free California. The movie becomes an odd, slow, road film with one of the last fighter pilots in pursuit. Much like Flash Gordon, The Last Chase was heavily repeated on HBO in the early 1980's, and must half seen in a dozen times. 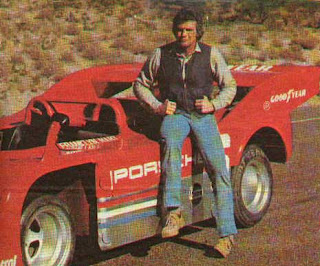 While this film is slow, overly dramic, and suffers from plot-holes, there is something about this 1981 B-movie that strikes a cord with me...maybe because there is a Porsche at the center of the film? One of the elements that this sci-fi film gets badly wrong, is how electric cars operate. Most the government-mandated electric cars were rented golf carts, and because their limited speed, they could not  give chase to Hart's Porsche. Seriously? As someone who is about to buy an electric car (the Nissan Leaf) and has test driven a few electric cars, I can testify that they haul electrons off the line.

John Carpenter's film-making career has some real marvels like the Thing, Star Man, Escape from New York, but by the late 1980's, he had fallen down the ladder, and 1988's They Live was made for three million dollars he had to raise. The end result was one of the better Twilight Zone style-clones that mixed, sci-fi, action, comedy, and political mockery that was much better than one expects. Even to this day, They Live is hard to ignore, especially, it's warns of being a passive sheep. I mean...could there have been Duke Nukem without this movie? 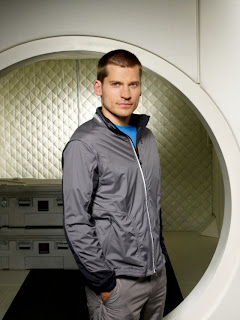 I do not regard 2009's Virtuality TV movie pilot by Ronald D. Moore as a B-movie, but more of an unrated film that should be viewed by all fans of sci-fi and one of my most-watched DVDs. Around the 2160's, Earth is about a century from being uninhabitable for human life, and another home must be found. This news breaks as the first extra-solar system spaceship, the Phaeton is on its ten-year long mission to Epsilon Eridani. The mission is change from one of exploration to interstellar house hunting (that show is in the works for HGTV!). With an excellent cast, SFX, and dialog, the pilot moves along with various storylines being revealed. The maddening element about Virtuality is that FOX did not pick up the show, and our answers will never come. 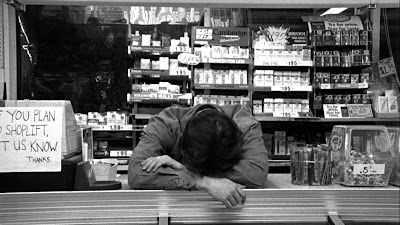 Clerks came a critical point in my life when I finally saw in early 1996, and changed my point-of-view on what I was doing with my life and where I was going. Within a few short weeks of viewing Clerks, I moved to Dallas from Ponca City, and restarted my life. To this day, I cannot buy eggs, hear the number '37' or the phase 'best of both worlds' without thinking of this masterful independent film.