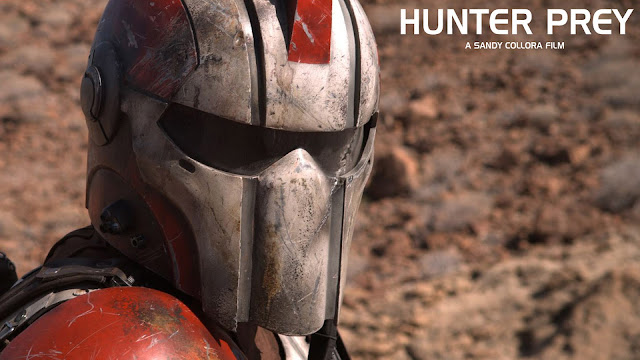 After watching The Outpost on DVD in 2010, I decided to see what other great B-movies I was missing out on, and after an lost afternoon on youtube, I discovered the trailer for a cat-and-mouse chase sci-fi film featuring soldiers in sweet armor. That film was Hunter Prey, and I finally was able to watch a few months ago, then found the DVD at a local Movie Trade World, and decided that Hunter Prey was worth of an FWS movie review.

The Plot of Hunter Prey

The military transport vessel, the Prometheus is damaged and crash lands on an unclaimed and uncharted desert world. Within minutes of the crash, the small elite military team comes under fire from their former prisoner, killing one and wounding another. The military command HQ, 'Alpha Base' orders the team to pursue and capture the target. However, all is not well with the unit of three. Since the prisoner was a VIP, the brass sent Commander Karza to lead the mission, while the unit commander, Centari 7 is bitter about losing the majority of his team on a black op that he knows nothing about, while Karza wants simple obedience. Now, the team has less than 100 hours to re-captured the target prior to exfil. For the next 100 hours on this rock, three will hunt one, and a choice will be made that will alter the balance of power in the galaxy. 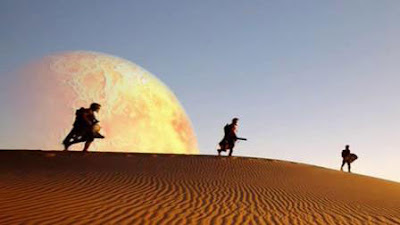 Let me save those the time that don't want to slog through my normally wordy review...this film is very good, one of the better sci-fi movies I've seen in years, and this film is proof that budget does NOT equal quality. Filmmaker Sandy Collora has turned in a solid military sci-fi chase movie with twists and turns all on a hellish desert world (was filmed in Mexico) that is much a character has the human cast. When it comes to cast, only the voice of the 'Clea' portable computer is a familiar name, Erin Gray of Buck Rogers, the rest are composed of alumni of Collora's other fan-films, but all delivery solid performances that does not break the audience from the fictional world. 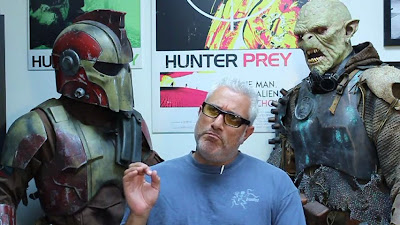 That fictional world is explored through banter between Centari 7 and Jericho, and is interesting and densely chewy, allowing the viewer to be intrigued about the back-story. I also greatly enjoyed the director's reference's to ALIEN, BLADE RUNNER, and Enemy Mine. Much praise should be given to Collora's choices in script, makeup, the limited use of CGI SFX in favor of more real (old-school) elements, and the ingenious plot that gives the audience more than a typical film. Hell, this film more original than AVATAR! Speaking to that originality, Hunter Prey's combat armor, weapons are all impressive, especially since Collora weathered them, giving a nice 'lived-in' feel. 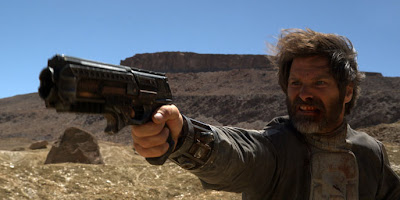 This Sedonian combat armor suits, called 'live suits' in the film, allow for medical treatment and biological environmental adaption via an portable computer system, similar to Cortana. This was a nice little touch that I enjoyed, because the armor was given some thought One thing I very much liked was how the realism of leaving the footage of the actors fighting with their gear, weapons, and the environment rather than editing it out. Too many film show an unrealistic relationship between the soldier and their gear. Anyone who has been in the military or even played milsim paintball knows that sometimes you have to work around the gear. It is these little touches, from props, dialog, to realistic events, that allow Hunter Prey to shine.

I'm not going to run down Hunter Prey for having a budget of less than $500,000, it is what it is, and I'm not going to be a douchebag like some other reviews I've read. One thing that bugged me throughout the film was that the alien Sedonians used human Greek mythological names, and thats seems totally out of place. I know that Collora wanted the audience to believe that the armored hunters were human, and their prey was an alien, but there could have been a different way. One plot element I wished had more developed, was why unit commander Centari 7 has the beef with Commander Karza?

Other reviewers online have an issue with actors' voices while they are wearing the helmets and the fact that the Sedonians resemble the Tau from Warhammer 40K. I normally watch this on my laptop with earbuds, and maybe because of this I don't have an issue. The issue I did have, was the Sedonian helmet HUD view, which was muddy and a piss-yellow color, to boot. Another issue brought up by other reviewers is that the DVD is barebones...Hunter Prey is not AVATAR . While working on this review at work, some people asked me if they should see this movie, and I tell them that they have to be into sci-fi in a serious way. Great science fiction is one that often transcends genre and becomes accessible to those that wouldn't normal watch an 'space alien movie'. While I regard Hunter Prey has a good MSF movie, but, it is more geared towards the established fan of sci-fi films.

Once again, this contains major spoilers for the central plot of the film, and involves an underdeveloped element. Throughout Hunter Prey, Jericho had several opportunities to kill Centari 7, and didn't do, and when Centari 7 has the same chance he doesn't take either. While Jericho's actions are explained in the film, and are logical, Centari 7 is more of a mystery, especially considering the what is at stake for the Sedonian people if these alien soldiers fail in their mission to bring the prisoner back to Alpha Base. 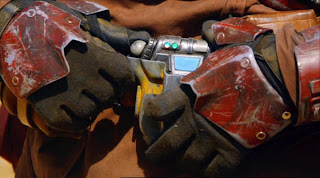 The spoiler is that Centari 7 knowingly gives Jericho the coordinates for their homeworld, allowing the Earthman to delivery the world-bomb to its target and wiping out the majority of the Sedonian people. We are also led to believe that portable AI Clea willingly helps Centari 7. While there are elements within the story that could have fueled Centari 7's betrayal, it isn't enough to warrant the complete extinction of his own people. I've seen this movie several times now, and I just don't see it. It would have worked if Centari 7 wasn't a Sedonian, but had been member of subjected race of the tyrannical foreign policy of the Sedonian Imperium.

Should You Watch Hunter Prey? 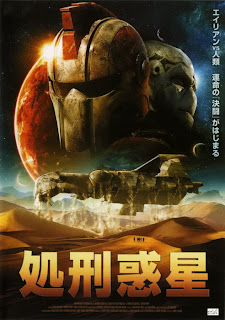 This film is a brave piece of military science fiction that is both simple and complex at the same time. There is much more going on in this alien desert than meets the eye. If you are a fan of science fiction, than this is a good film to waste 90 minutes with. I would ask that you to preview the film online, but buy the DVD, so Sandy Collora can make some money to support another project. While FWS has a limited purchasing budget, I felt that the DVD to Hunter Prey was a good investment. 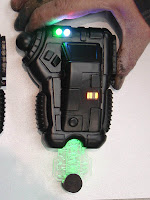 The portable computer intelligence, 'Clea' is voice by none other than Erin Gray from Sliver Spoons and Buck Rogers! Move over Cortana! 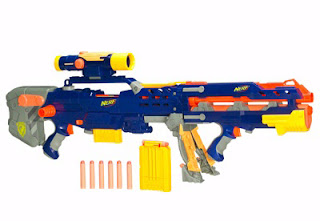 The primary Sedonian battle rifle weapon is a
repainted and dressed up Nerf N-Strike Longshot CS-6 toy rifle. The Nerf N-Strike line is further used for their sidearm , that was redressed and slightly modified Nerf Maverick REV-6 blaster.

The alien bounty hunter hired by Sedonian central military command is none other than the director of the film, Sandy Collora! 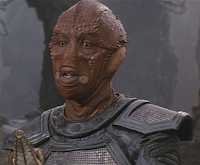 While Centauri 7 and Jericho have voice communication, they banter back and forth about why humanity lost the war, and another alien race is mention by the name of 'Drac'. The Drac were the primary hostile race in the 1985 MSF film Enemy Mine and was played by Louis Gossett Jr.

Clark Bartram who plays Orin Jericho has also played Batman in Sandy Colloro's Batman: Dead End and World's Finest is mainly known has a stunman in the business, along with being seriously ripped (I mean seriously ripped, dude!) and selling fitness DVDs.