FWS News From the Front: Incoming Comics and other things... 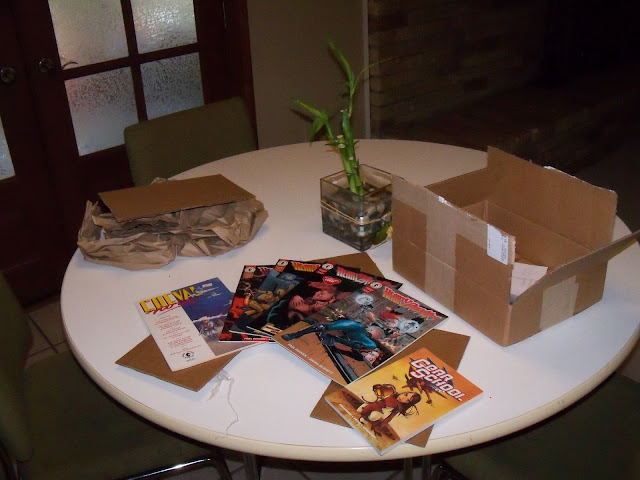 I worked late Friday at my hospital job, when my wife called me saying I had box from Lone Star Comics, and Saturday morning, after some pancakes for the family, I was smiling ear-to-ear by all of the comic-MSF-goodness that was spread on my kitchen table! FWS has a budget, all be it a small one, for acquisitions, and I spend this month's cash was spent on MSF comics that will be appearing on FWS in the coming months.
In about a month, FWS will have its first interview with the creators of HEARTBREAKERS and BOILERPLATE, Paul Guinan and Anina Bennett! We will talking all about HEARTBREAKERS, one of the first MSF comics with well done female soldiers and one my favorite Dark Horse Presents stories! I'm uber excited about this opportunity that these two great creators have given to FWS! Hopefully, NBM publishing, that printed The Forever War graphic novels, will be grant our request, and become our second interview. There is an new series of blogpost on FWS that will be premiering later next month, the Forgotten Weapons series. This will cover real-steel weapons that have disappeared from the collect conciseness. I got the idea while attempting to reformat and reedit my old SR-47 assault rifle blogpost, and decided that I wanted to write more like this. If you've got a Forgotten Weapon you would like to see on FWS...send it to me!
Also, some of you may have noticed some changes to the layout of FWS. I've started a random MSF image that will be updated frequently, and there is a link to Benjamin Curtis hospital fund. Ben's band, SCHOOL OF SEVEN BELLS, is my favorite band, and has been a wonderful element in my life since 2009. When I heard the news that Ben (a fellow Oklahoman and inspiration for my new haircut) was battled cancer, it broke my heart, and that link is just my small attempting to repay all of the light and love they've given me over the years. If you've never heard SCHOOL OF SEVEN BELLS music, then prepared to be amazed.
And those that are interested in the FWS T-Shirt endeavor, than I'm disappointed to report that the effort is going slowly. I've been turned down by one of my two artists, and still waiting to hear from the second. If that fails, then I'm going to post up an open request for an artist.
One of my current favorite SCHOOL OF SEVEN BELLS songs that they performed at the Dr.Marten's Store in Union Square in January, 'Low Times'  ENJOY!
Okay...back to reading comics and playing some BLACK OPS: II!