Terra Nova finally premiered last night, and FWS is here with the review. This one was done fast, so I fully apologize for the errors.

The Plot of Terra Nova 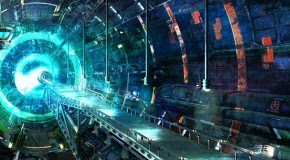 We finally have some answers to the questions, chief among them of why the massive time machine was opening portals only to 85 million years ago and not a friendlier time period. From the very brief information presented on screen, Earth scientists opened a "fracture into time", while attempting another experiment...maybe FTL wormhole travel? A probe that looks straight out of Portal is send over with a beacon that could allow people in the present to find it...but they never did, making the portal opening to alternative universe, just one is set 85 millions years ago with Earth-like Dinosaurs. The world of 2149 is not happy place, massive overpopulation that restricts two-children per family, drying up oceans, nothing green...waitaminute, where have I heard of this before? Desperation causes Earth to invest in settling the past of this alternative Earth with the best and brightest of the dying Earth. The pilot orbits the Chicago-based Shannon family, three kids, the husband's a cop, and she's a doctor with a tons of specialities, when someone tells that they have an illegal kid, the Dad, Jim Shannon hits a few cops and is placed in a nasty prison for two years. During that two years, the Terra Nova project is heating up, and his wife as been selected to go on the "Tenth Pilgrimage". Suddenly, Jim breaks out, gets the third kid past impressive security and arrives in the rain forest...goodbye 2149. Yeah, it happens that fast.

The new colony site is lead by Nat Taylor (Planet of the Apes anyone?), the first man through the portal, and general all-around badass, and all is not well in paradise....there is a breakaway colony from the sixth pilgrimage, called the "sixers", similar to the Others from Lost, and then there are the deadly CGI dinosaurs.
When the Shannon arrives into the settlement the plot point switches to the teenager son of the Shannon clan, Malcolm, who is a serious asshole, and displays that at every turn with his mouth, and  by sneaking off with some damn teenagers to explore the jungle, swim, and drink moonshine. Along the way, Malcolm finds the local secret, strangle geometrical drawing that are older than the Terra Nova settlement. Lost anyone? Of course, the Sixers find their battery operated Jeep, steal the batteries and even them with no way out and night falling...and there is a rescue operation with all the main characters, and family fun with gunfire ensues.

The GOOD
Visually, Terra Nova is impressive, from 2149 to the Terra Nova settlement, the medical station, one can easily see where the millions went to: special effects, and location rental (certainly not actors).

The reaction of the Shannon family to their new surroundings was one of the better points, and how different the new world of Terra Nova was over 2149, especially when one considers career, education, and daily life, which all brought up during the pilot, and even the perils of using green technology (cold showers anyone?).
The odd thing is, for all of the work on the Terra Nova settlement,the world of 2149 is much fleshed out and interesting than the Terra Nova settlement. 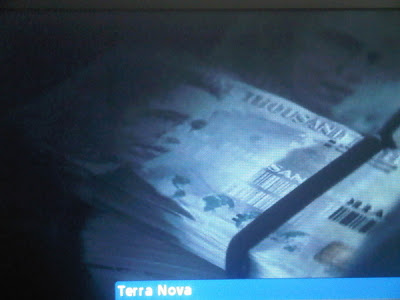 With the plot element of two-children-limit is a good plot device, the characters (and actors) seem more genuine here than at the settlement, and even Obama being on the money in 2149. The CGI visuals of 2149 are right out of Blade Runner, Brazil,and Max Headroom (yes, I watched it in 1987, and I kept waiting for him on a billboard in 2149 pitching New Coke...serious lost opportunity), and were better than the future Earth scenes from Avatar. In addition to the visuals, world of 2149, there are certain concepts that the writers hit a home run with the probe, the introduction of the sixers along the odd geometrical symbols on the rocks. One of my favorite little bits of Terra Nova was Taylor's dinosaur skull desk...what a conversation piece! 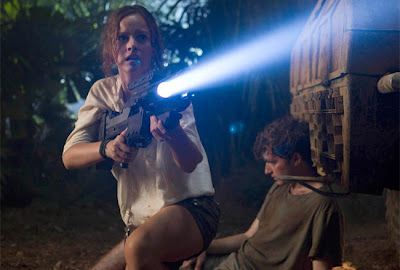 Where to start? First off, Terra Nova samples more than a Beastie Boys song, but, unlike those sonic masterpieces, Terra Nova fails to draw anything original from their sampling of Earth 2, Lost, Sea Quest,Jurassic Park (book and movie), A Sound of Thunder, Avatar, The Land of the Lost. So, it pains me to say this, but most of the two hour pilot was bad...from the acting, the basic plot, the lack of imagination with futuristic technology, and the oddly bad CGI dinosaurs.I grew especially tired of the pissy teenager-act from Malcolm Shannon, the protector-family man act of Jim Shannon, and the laissez faire attitude of the other kids when they were outside the wire with things running around that could make a quick meal of you. 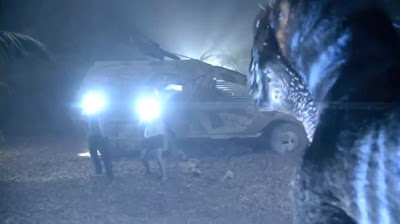 But the real piece de resistance? The painfully recycled find-the-lost-kids-while-their-being-attacked-by- dinosaurs plot point, included is the horror flick standard of one chick running out of the armored vehicle and getting chewed up. Really? It that the best these writers could have come up with? I also have to bitch about the guns and technology of Terra Nova, most of the 22nd century weapons are badly redressed real-steel firearms, the carbines seem to be traditional bullet-firing bullpups, but the magazines are in a "upright" position. There seems to be some sort of advanced less-lethal DEW systems, which is rare on-screen, but they are not explained enough for the audience (especially me). One of the missed opportunities with character development was with Nat Taylor, in the pilot episode, he tells Jim Shannon that he was the first one through the portal, and for 180 days, he was on his own, until another team showed up (the portal machine sent them at the same moment, but they still arrived months apart...future story in the works?). I would have written Nat Taylor as an world renowned hunter, explorer, adventurer, like the first man to scale Olympus Mons, or the most interesting man in the future (or past?). 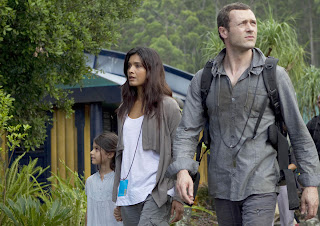 The sign worst sin of Terra Nova is the pacing of the entire show. In the pilot episode rushes the audience from 2149, skipping over massive plot holes like they're playing Pitfall, shoots them off the Terra Nova settlement, then it slows way down, revealing too much of the mysteries in the first episode of the show. As I said above, if this show is going to borrow from Lost than it should learn about revealing mysteries slowly, keeping the show interesting.

Will Terra Nova make it? 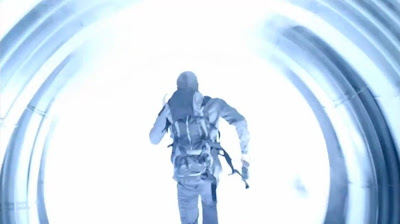 In a word, no. It's just too expensive, and its not breaking any new ground to attract the Lost/X-Files crowd to a firmly sci-fi show. I give it four to five episodes...hey FOX could always bring back Firefly for much cheaper.