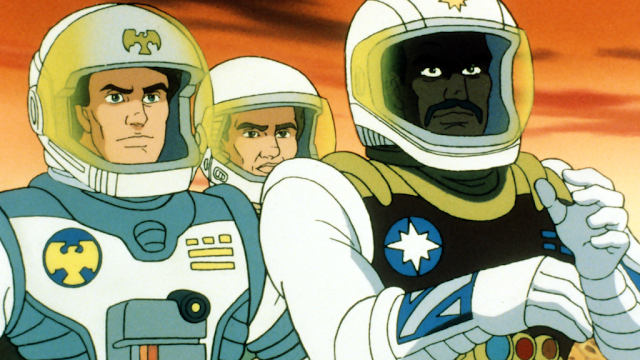 In another segment of the oddities from the world of military sci-fi, we have the 1980's fusion between a toy line, cartoon series, realistic science and strong space war story that was called Starcom: the U.S. Space Force. STARCOM was created by Coleco Toys (who also made the misguided Rambo line) in the mid-1980's and was intended to be entire line of figures, vehicles, and playsets, along with other tie-ins, packaging all of this was Saturday morning cartoon. The STARCOM cartoon ran for all of 13 episodes around 1986 in the US TV market, however the toys lasted about two, both failed to attract ratings or sales. STARCOM quickly disappeared, but thanks to the internet and ebay, it is possible to remember elements of one's childhood. When FWS was started last year, I wanted to display all elements of military SF, including the oddballs of the genre, and STARCOM is certainly that, odd.

The Story of STARCOM: The US Space Force 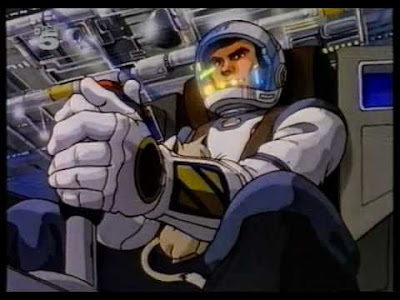 It is around the year 2050, and the nations of Earth have begun to colonize the Sol system, chief among the colonizing nations is the United States , and the military/exploration arm of the United States government is the "Star Command" or STARCOM. Earth as colonies on most of the worlds closest to Earth, and an L-5 space station. STARCOM itself has bases throughout the Sol system. In addition, research stations operate around the system, are protect by STARCOM's second HQ, constructed on an hollowed out asteroid hidden in Saturn's rings. 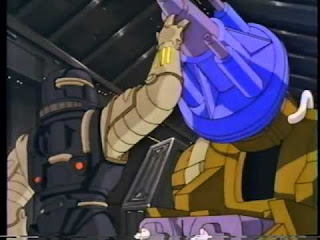 The actually military of STARCOM was highly developed, with fighters, fighter-bombers that could dual as transports, air-lift armored vehicles, the Astro Marine Corps, and even the ability to more supplies. It was clear that  STARCOM was intended to a complete combined arms approach to waging war off-world. If one reads the STARCOM series bible than you get the scope and level of work that went into developing this "kiddy" cartoon into something more akin to Anime than typical 80's American cartoons. Just read their workup of the FTL system:
Transtar Warp Drive, which allows them to open a tunnel in hyperspace, allowing travel through a universe in which the speed of light is much faster than it is in this one. This provides faster-than-light travel without the problem of relativistic effects. This capability cannot be used among the innermost planets, because the strain on the space-time continuum too close to a star could cause the star to go nova, destroying all of the innermost planets. The safest distance for use of the Starbridges is outside the orbit of Mars."
So who was STARCOM fighting? Pirates? Yes, in the asteroid belt, but I don't think it was shown in the series, though.  Russians? Chinese? Aliens? Not as far as I can recall, no other spacefaring nation was shown in the series, and real enemy of STARCOM came from a disgraced scientist... 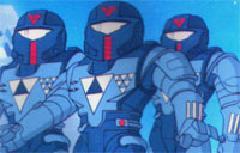 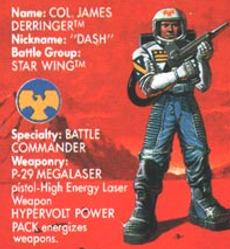 When it came to the main enemy of STARCOM, it was not rival nations, but a mad scientist who named himself "Emperor Dark", and operated from a mobile carrier-like vessel near Saturn. Dark, was a scientist working out of an underground lab on Mercury studying the "Obelisk", alien artifacts left by a race called "the builders." However, there was an accident, and Dark, the only survivor was forced to tunnel is way out. He blamed STARCOM for not mounting a rescue. This created Dark and his thirst for ruling over the Sol system, to accomplish his life goals, he hired goons, built robots, created the "Shadow Empire". and used several of these alien Obelisk...according the series bible, all Emperor Dark have to do was get several more to achieve power of the Sol system. While Earth's colonial ventures around the inner colonies, Dark rules most of the edge of the solar system, and his terrorism was preventing deep space colonization.

Why is STARCOM an Oddity? 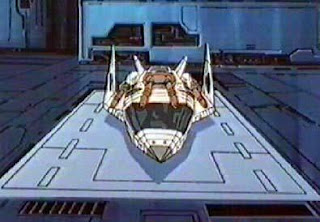 Okay, keep in mind that STARCOM was intended as a kid's show when I explain this, the fictional US Space Force, STARCOM fielded a vast, combined arms forces, that was even divided into different branches, like the Astro Marines, the Star-Wing, Starbase Command, Star Artillery. These elements were shown on-screen, in the toys creating a highly developed combine arms and command structure, and was defined more than the archetype of military toys: G.I. Joe. Coupled with this combined arms off-world military is the realistic scientific portrayal of  the solar system and planets were shown as science understood them in the mid-80's.

The show attempted to balance the space combat with scientific missions. Several of the episodes depicted alien animal life in the icy oceans of Europa and airborne creatures floating in the upper atmosphere of Jupiter. Next to the science was the new age theories of ancient astronauts known as the Builders, coupled with the rumored aliens structures on Cydonia, Mars.So, to recap this, we have a kid's show that shows old aliens, Obelisks that could rule the Sol system, a highly developed off-world military, science outposts, alien animal life on Jupiter and its moons, all set with a mad scientist and space battles....yeah, that's odd.

The 1980's were a great time for NASA and its public relations, the Space Shuttle captured the imagination of kids like me, and NASA used this to further development of math and science among young people (Didn't work too well, I'm a history major). This came in the form of the Young Astronaut Council (yes, I was a member!), and it supported STARCOM with PSA tie-ins that were similar to the GI Joe PSA's (knowing is half the battle, and the other half is superior firepower). This relationship can be seen in the manner that scientific research is shown with a balance to the space battles, and how the planets of the solar system are shown from a realistic way, also, the perils of operating in space.

THE TOYS of STARCOM 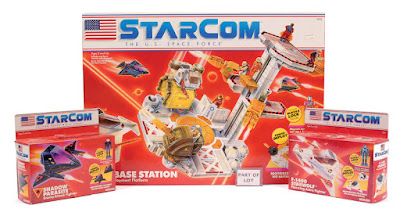 It seemed like during the Reagan 80's that every toy marker was after your parents' bucks with a two-fold campaign of the toys and the extended commericals, or also-known-as, the Saturday morning cartoons like Transformers, G.I. Joe, Robotech, Gobots, Captain Power...and so on. STARCOM was no different, it was created a toy line with a cartoon vehicle to market directly to the young viewers.Here is some of the reality of the toy verse the fantasy of the STARCOM universe. One of the cool elements of the toys was their MAG-LOCK...little magnets in the vehicles and figures...the series used this to allow our heroes to hold on in Zero-Gee. 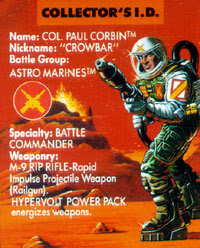 What happened to STARCOM: The US Space Force? 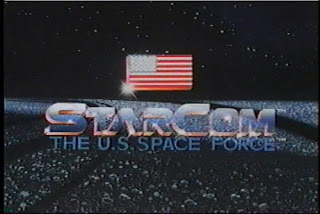 There is limited information on the series, and since I lived through its TV run, I'll take a guess what occurred to end the show only after 13 episodes. Here are, I believe, are the reasons that STARCOM series ended.When STARCOM hit the airwaves in 1987, it was the apex of the toy-driven Saturday morning cartoons, and this led to problems for STARCOM. My personal experience with STARCOM was that it was shuttled around the time slots, I often had to hunt down the series. Since the series was a bit of an oddity, broadercasters tried to fit in somewhere on the cramped schedule  So go the toys, so goes the TV show. 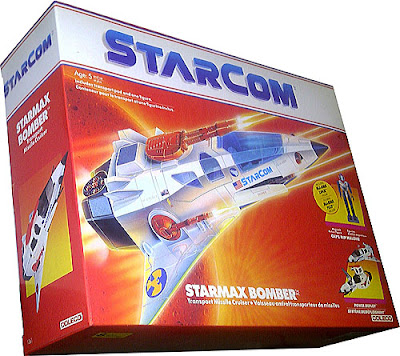 Like Captain Power and the Soldiers of the Future before it, the toys were reason the show was developed, and if the toys didn't sell, then there was no reason for the show. The issue was that the STARCOM toys, in my personal experience were rare. Now, where I grew up in Bartlesville, Oklahoma was not a mecca for high-end toy retailers, but I lived near Tulsa, and I saw only the figure. Only two of my friends had some of the vehicles, mainly the STARCOM Starmax bomber. I only saw the entire STARCOM toy line in Albuquerque, New Mexico at Windrock mall. They had this epic display with a mock battle between STARCOM and their enemies, the Shadows. But in the end, if you cannot find it, you cannot buy it. 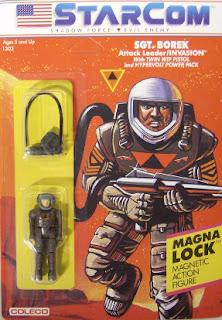 The size of the figure. This seems stupid, but if a child cannot play with it, than its of no use. STARCOM figures were smaller than the standard G.I. Joe size. Making it hard to integrate it into your other toys. I had visions as a kid, about waging war between my G.I Joe's and STARCOM, but because of the size difference, that was impossible. So, then you had to bug your parents for the entire line to play and STARCOM was expensive. I have never seen how much they cost back-in-the-day, but I remember that were pricey, and if my parents were going to spend the bread on some toys, I wanted Legos. The overall tone of military and space warfare, especially seen in the toys, put some parents off, especially if they had to buy G.I. Joe and Transformers, than it seemed they were overly militarized their nine year-old into a junior stormtrooper...and that's what to me.

My STARCOM Memories...
1986 was a good year to be a kid, and during those golden years, I watched STARCOM, but I never owned the toys, for the reasons above, and if you saw the toys among the dozens of war-toys stuffed into Toys R Us shelves, frankly, they looked unimpressive, due to their size being only two inches, next to nearly four standard size action figures. The cool things about the toys, was their Mag-lock feature, which allowed the magnets on the figures to attach to the vehicles and playsets, along with them being motorized. However, it was the TV series that has stuck with me for the last 25(!)years. It was an military science-fiction cartoon with some real science elements, a well-thought off-world military, and added in some alien mysteries that hit all cylinders for me. Thanks to the internet, I've sat down a watched a few...and...well...Things are never as you remember them, and STARCOM lives up to that. It is 80's product with firmly unrealistic battles, and cheesy dialog worthy of tortilla chips...but I can see the promise of the series and why I kept in alive in my head for all these years.