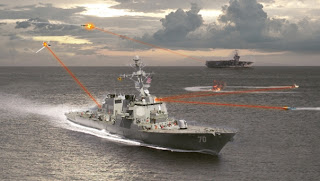 In April of this year, the US Navy tested their maritime solid state laser against a small motorboat. This DEW system was developed by Northrop Grumman at a cost $98 million dollars, and is aimed at the changing role for the US Navy, instead of Russians, the Navy is forced to deal with pirates.
The interesting note about this live-fire test, is that high-energy laser (HEL) was mounted to a US  naval vessel (the USS Paul Foster) and fired at a small motorboat during realistic ocean conditions off of the coast of California.

Lasers and the US Navy

The Navy envisions these types of DEW systems being mounted on most naval vessels for defensive operations, a sort-of-energy-shielding if you will, the HEL would be used to intercept incoming missiles or shells, and to knock out small pirate boats.
The laser itself is concerned a high-energy solid state laser, which means that the laser beam is 15 kilowatt, however when you watch the test firing, it seems too slow to be an effective defensive system. To solve this, the Navy hopes to boost the power output 100 kilowatt, which would damage the motor within a second, rather than eight to ten, and arm eighth classes of warships with the HEL.
The roles of the Seaborne Laser

Given the HEL accuracy, it would highly effective in both offensive and defensive roles. When used as an offensive device, its ability to be targets on a specific small target, like the motor of a boat, incoming attacker, like radar dish, communication systems, weapons, and propulsion. This, unlike the current Mark 45 Mod 4 127mm naval gun ,the HEL allows for role flexibility, and can deny the enemy. Another useful element is the invisibility of the beam, this allows for the US Navy to get the drop on a target without the telltale signs of traditional gunpowder weaponry.

The invisibility of the HEL would take a  psychology toll on attackers, especially ill-educated pirates, and this could dismay future attacks.  In its defensive role, the HEL could knock out incoming missiles, aircraft, and warning smaller vessels to stay away with a more low-powered heat beam, (like pirate vessels.).
VIDEO


Here is the video of the US Navy testing the laser against a small boat motor.
Posted by William at 17:21