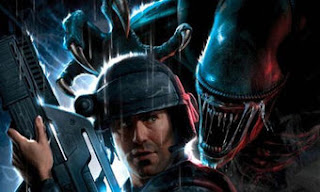 Ladies and Gentlemen, some prayers get answered, it looks like ALIENS: Colonial Marines by the creator of my favorite WWII game, Brothers in Arms, Gearbox Software (right here in Dallas!) is finally going to be a reality. It seems that finally ALIENS is going to get an epic, properly done shooter-based video game, that we fans been wanting for a solid video game adaptation since the movie came out in 1986. I, especially, have been waiting since pumping quarters into several arcade games, buying  the ATARI Jaguar Aliens vs. Predators in 1993, and so on. But in 2012, it looks we're going to final get the FPS we deserve in Gearbox's ALIENS: Colonial Marines

The game follows another team of emergency CMC rapid response unit (like the one in ALIENS), as they board the Sulaco from a similar Conestoga class light assault carrier, then both of these ships crash on LV-426, forcing the marines to checkout Hadley's Hope, the colonial settlement on LV-426 (AKA Acheron).
From the trailer, it seems that Gearbox Software is trying to get things right, with the correct look, sounds (especially of the guns), and the feel of the world of ALIENS.  I was deeply impressed by the level of care and attention give to the design of the colonial site, and the xenomorphs being more real than any ALIENS based video game. 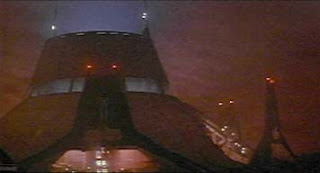 What does not feel right, is the basic plot, and the return back to LV-426. According to Bishop from ALIENS the terraforming "atmosphere processing station" fusion powerplant exploded in a mushroom cloud "with a blast radius of 30 kilometers; equal to about 40 megatons", but somehow these colonial marines are walking around the colonial site...what gives? The crash landing of the Conestoga class light assault carrier also not right in my mind, its a sloppy plot device, isolating another CMC team on a ruined, creepy colonial town site with "those things running around." Then there is concept art of a marine using a Powerloader against a Queen xenomorph...really?!
I wish that Gearbox Software would follow ALIENS: Colonial Marines with a video game based on the off-world  conflicts between the nations of Earth described in the ALIENS: Colonial Marine technical manuel, divorcing the video games from the shackles of rehashing the conflicts on LV-426 with the battling of xenomorphs. I would to play a Colonial Marine battling Beebops in yellow jungles, seeing M-22 Ridgeway firing on other armored units on disputed colonial worlds, with UD-4Ls' lighting up the sky with rockets...that's the game I want! Anyways, I wait to review this game when it drops around spring of 2012.
Stay Frosty...
Here is the trailer:
Posted by William at 18:39