Seemingly hanging above Mars was the potato-shaped moon of Deimos; the colonial transport docked with the bulbous profile space station, and began the work of off-loading its cargo. Sandoval was still sealed in his tube, snowed-under via an artificial coma, totally unaware of the process that was about to start. 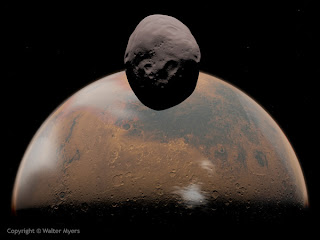 Few humans were involved in the processing of the recruits, allowing for more bodies to be on the frontlines, not back in the nearly abandoned Sol system. However, not all the humans were gone from Deimos. Above the conveyor lines that feed the encapsulate recruits through various medical machinery, were two of the medical staff for Swift Depot observing in their control booth. The smell of old coffee and fresh cigarettes hung heavily, causing the air scrubbers to work harder. Doctor Selena Martinez finished her cigarette, took a seat next to her med-tech, and was immediately bombarded by holo-screens, she deeply rubbed her eyes. “Which batch number are these again, Sparks?”
“This is number four, and these are marked as front-line material.”

“Okay…: The doctor shook her head, trying to wake up from the long day. “Spool up the R-MRI, let’s see what these Earthers are like on the inside.”

“Spinning them up, doc.” The rapid-MRI, along with the battery of other tests, labs, and injections were designed to restore these abused bodies to near mint.

“I wish for once the recruiters Earth-side would pay closer attention to these recruits!” She had venom under words; because that was only reason Dr. Martinez was assigned to Deimos, the backwaters of colonial space was to be a watch-dog for the medical computers and double check the recruiters for the final sign off on the recruits. Both of them in the booth, as well command back on Janus, knew that the recruiters took basically anyone to fill the quota. This only made her job harder. Her eyes darted back and forth from screen to screen, assessing each recruit to see if their frontline grading was valid. Martinez sighed; assigning the worker-grade down to Mars for work in the war materiel factories was one thing, they would never be shot at, but the frontline-grade recruits were being sent directly to the front, Abaddon, and everyone in the colonies associated that world with the grave.

“Well, doc, there hasn’t been any cases of the plague yet.” She shook her head and laughed.

“Those damn bedbugs were worse! Remember Sparks?” He itched his scalp just thinking about.

“Yeah, only opening this place up to space worked in flushing out the buggers.” Doctor Martinez scratched at her head too while monitoring the holo-screens for anything that the AI wouldn’t pick up. “Whoa! Look at this one!” Martinez rolled her eyes, Sparks had issues with being too casual during the scans.

“Sparks, I swear to Hubbard, if that’s a girl with big boobs, you’re going on report!”

“No, doc, read his file and see the scans.” She peered over the banks of floating screens, of someone named Sandoval, read the text the med-tech was pointing at, and then turned her attention to his R-MRI report.

“Yep, are those enough broken bones for ya?”

“At 13, is that right?” Selena shook her head at his file. “Earth must more of a mess than I thought.”

“Nuclear war will do that.”

“But a child soldier?” She countered, “killing the first time at thirteen is loco. And this poor bastard as more of a combat veteran than most! “The mere thought of her fourteen year-old daughter killing revolted her to the point of nausea.

“That’s why they’re here, doc.” She made a face, and shoved her hands deep in her lab coat. Earth was a shithole, it had been about hundred years since the nuclear war and they still were living off of garage. It was pedantic, Dr. Martinez sneered, we terraformed worlds in less time. But, she was all too aware of their current war, and the colonial soldiers were nothing compared with these marauders from the first world. This Sandoval was a living example…a killer before he could shave. She took out a cigarette, offered one to Sparks, and lit both. Thanking whatever gods there were, that the original colonial settlers had transplanted tobacco plants to the stars. Nasty habits shouldn’t just be the property of the first world. Dr. Martinez mused, as a key card emerged from her lab coat. With a gently push into a secure portion of the sweeping control panels, she unlocked a glowing red button, Sparks paid it no mind.

“The first batches of transplanted were executed when they ran wild, like children with no parental supervision.” She paced back from the controls, “that’s how we lost Aquila,” with that, the doctor hit the SUBMIT button surging the first dose of the Courage into the recruits’ bloodstream, forging an unimaginable habit of peril and pleasure. “That’s not happening on my watch, not ever again.” Martinez whispered, justifying her actions, but Sparks did not care, all everyone wanted back on the colonies was victory…no matter the cost.

“They’re lives suck anyways,” Sparks added to the doctors’ dark statements. She raised an eyebrow, and he raised one in response. “Have you seen the holos of that burned up world, if there is a hell,” Sparks paused and recalled of all those imagines of the wasteland Old-Earth had become, “they’ve already been to it.” The med-tech pointed to the industrial conveyors of freshly minted soldiers.

“I think Abaddon is worse, Sparks.”

“If you say so.” He returned to his boards and readied the next batch, but in a rare moment of compassion, he turned back to Martinez. “Hey, Selena,” she perked up when Ray Sparks used her first name. “The computer’s telling me that these next recruits are either going to the Steyr-Phoenix arms factory or the Hopper plant.” He hinted, and Martinez picked up, loud and clear.

“No, Ray,” she looked back at Sandoval’s file, “he’s a soldier; the kind we need there.” He nodded and input the commands that propelled the unconscious Sandoval down the line to the automated Singularity Jump capable transport. “We’d better win on that damn planet.” She signed and flumed around for her pay-card, put out the cancer-stick, “want anything from the caffeine dispenser?”

“Yes, long black, light on the cream and sugar.”

“If the caffeine dispenser goes down, it will be.” When the doctor disappeared down the hallway, relatively below them, Recruit Sandoval moved down the line, still blissfully unaware of everything around him. The next time he opened his eyes, he would feel the light of Sigma Draconis, some eighteen Lightyears from Earth, and his eyes would be open to the battlefields of Abaddon.
Posted by William at 20:14