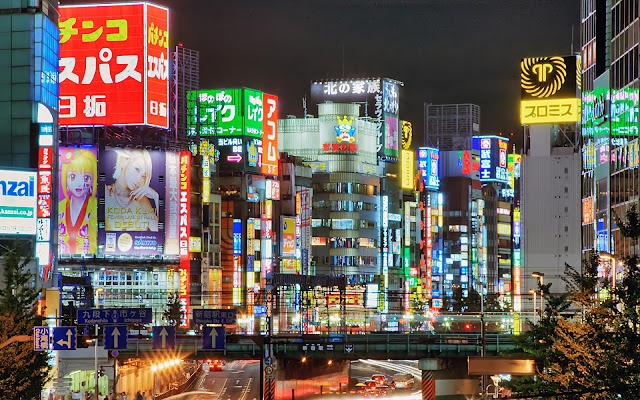 To us old-school fans of Anime and Manga, like me, it is still strange to see the amount of Manga and Anime available in mainstream book stores and online. I've been watching Anime since 1978 and until the mid-1990's, Anime and Manga were underground, and suffered from poor translations and video quality...but I was completely hooked. So much so, by the time I was in high school, I could carry on a basic conversation in Japanese. During those dark years, we got what we could take and afford, and fans were few and far between...unlike today. In the small towns in Oklahoma, where I grew up, Anime fans were few, and often I was the only one with videos to spread the gossip of Japan animation over that Disney shit. Anime has had a huge impact on my life and writing, and I thought I should share my top ten anime works. You will notice that Akira does not appear on this list. And there is a good reason for that. While I read the manga of Akira, I was never impressed with the Anime, it was just too much with annoying characters, and I think it over-hyped. 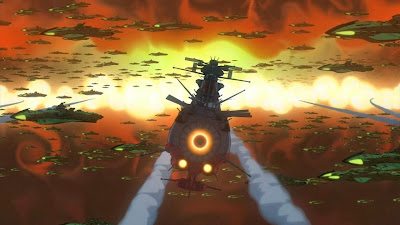 Back when my family lived in Dallas in the late 1970's, I fortunately enough watch Starblazers, Mobile Suit Gundam and Battle of the Planets on local TV. The series that made the most impression was Starblazers, and for the rest of my life, theme song and the imagine of the Yamato would give me chills. For years, I collected everything Starblazers I could get my hands on. To me, Space Cruiser Yamato was a great story, backed up with impressive space battles, and interesting characters...and of course, Nova. Even today, Starblazers is one of those cherished childhood memories that is getting better because of the remake Space Cruiser Yamato 2199.

Love. That is the one word that I can pick for how feel for this groundbreaking Japaneses/American animation series. This changed my life, and will be forever in my heart for the effect it had on me back in 1985. Even today, I still pop in the saga in my DVD player, and journey back to those heady days of grade school. While Harmony Gold may have cobbled ROBOTECH together from three separate unrelated Anime series, you would never know it by integration of the central storyline. ROBOTECH as been cited as one of those Anime that got the ball rolling for the acceptance of genre in the West. For me, this my favorite Anime, and the most iconic. Now, we just need someone to make The Sentients....I just need the rights, the writers, and the cash...lots of cash.

If you are fan of Anime, than Cowboy BeBop belongs somewhere on anyone's list of top Anime...it is just that good. I got to experience Cowboy BeBop in 2011 when a fellow Anime fan and co-worker, Colt, at the TICU loaned me the complete series. Very quickly after popping the DVD in the tray did I understand why this series receives the acclaim and following it has. One of the best and coolest animes ever done.
4. NINJA SCROLL (1995) 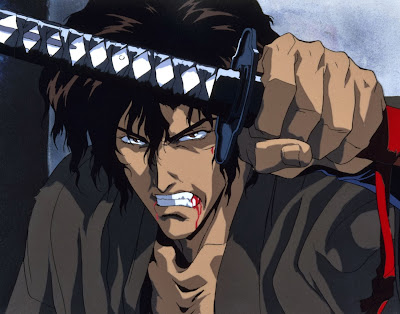 When you used to buy Manga Entertainment VHS tapes, there was rad advert opening, showing all of the cool videos Manga had for sale topped off with one of the best KMFDM songs of all time. Soon after watching this opening on my GITS tape, I ran up to Wichita and bought Ninja Scroll, because it looked so cool, and come to find out, it was. Ninja Scroll was written and directed by Yoshiaki Kawajiri, who also directed Wicked City, Demon City, and Vampire Hunter D, all of which are oddball movies in their own right. If you seen these three works, than you know Kawajiri's passion for demons and strange sex. Seriously...just watch Demon City or Wicked City. Ninja Scroll is one of his best, and it helps that the setting is Feudal Japan, one of my favorite historical periods. At one time, Ninja Scroll was the most popular anime OVA next to GITS and Akira. His weird obsession over demons, swords, sex all work in the context of the story and characters of Ninja Scroll. The only issue I have with Ninja Scroll is you better be careful who you watch this with and the semi-sequel containing the main character, which is not a good anime. 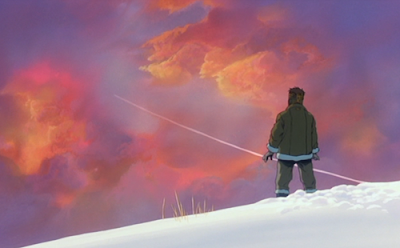 This is another anime OVA that bought because of the Manga Entertainment opening to their videos in the 1990's, and unlike Mad Bull 34, Royal Space Force  Wings of Honnesamise was worth the price that I paid back when Suncoast was in business (Man, I miss Suncoast video!). Honnesamise takes place on another world with human-like species that are on the edge of manned space flight while their world's two major superpower kingdoms on the edge of a world war. The two-hour 1987 OVA tells the story of Honnesamise Kingdom's first astronaut, and his trails from failed navy pilot, to lackluster member of the royal space force to the first man in space. 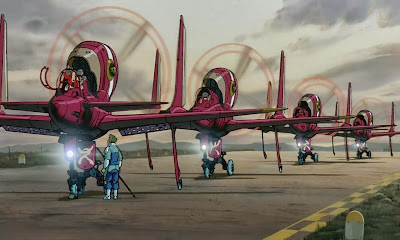 During his rise to historical figure, he meets an ultra-religious woman and the child she cares for, who barely talks. Honnesamise a beautiful, sublime piece of animation with a great story and some major talent behind the production. Honnesamise was able to convince the viewer that it takes place on another world and another culture, while not being "too alien" for the viewer to relate to. The only misstep that the OVA commits is the the religious characters of Riquinni and Manna. Every time the main character escapes to the countryside to see them, the film slows down, and the main character is bogged down in confusion. There was to be a sequel that took place fifty years after the events of the film, but script issues forced the abandonment of the project during pre-production.

Anime, like any other genre, as turning points were a groundbreaking work comes along and changes the game...1995's Ghost in the Shell OVA was such work. Blending CGI and traditional animation to the story based on the epic manga, GITS would forge TV series and several films, but to me, the 1995 OVA is still the best. As a fan of the manga, I also enjoyed the more serious take on the world of GITS and Project 2501. When I first watched this on VHS tape, it was a birthday gift from my brother, and I had only heard about it, but never seen. For that moment on in 1996, Ghost in the Shell would become one of the animes I would enjoy over years of re-watching. One the best credits I can give to GITS that is one of the few animes I've bought on DVD, and will continue to watch and own for many years. 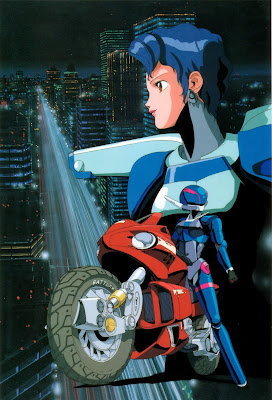 I was very lucky that the Ponca City blockbuster carried a limited number of Anime on VHS, and that they specifically carried this one: Bubblegum Crisis. Originally, the series was going to be 13 episodes, but poor sales and disagreement between the two studios that owned the rights, forced BGC to be cut down to eight. While not popular in Japan, it enjoyed success in America. The series follows the adventures of the five members of the Knight Sabers in the post-earthquake Neo-Tokyo in 2032 in their battle against the mega-corporation of Genom. Not only was the series interesting, and fulled with an cool cyberpunk world with tons of BLADE RUNNER references, it had great original rock music that will enter your brain like those worm-things from Star Trek: II The Wrath of Khan. I love this series, despite some cheesiness and plot-holes, but it is filled with memorable characters and events. If you notice, I have not discussed BGC: 2040, because I fucking hate that 1999 series! It is not BGC in my opinion, and lack the magic that the original 2032 series 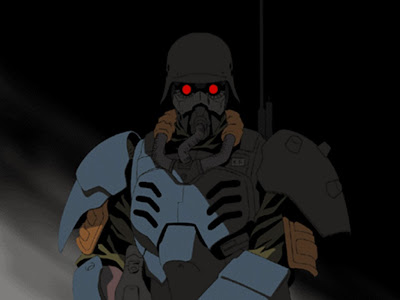 There is no doubt that one of the most visually impacting anime OVAs is 1999's Jin-Roh: The Wolf Brigade, and I reason I bought this DVD in 2009 was due to the imagine of the red-eyed soldiers, the Kerberos Corps, and their similar to the Helghast soldiers from Killzone. Jin-Roh tells the story of alternate post-WWII Japan after the 3rd Reich Occupation. Japan is not a happy place with factions battle for control of Japan's future, and aiding the Japan police force is the heavily armored and armed specially trained police officers. I was surprised how complex, haunting, and bittersweet this movie was after watch Jin-Roh the first time, and the concept of "the wolf brigade" as stayed with me to the point of influencing my book on super-soldiers. Interestingly enough, Jin-Roh OVA is actually near the end of the storyarch of these armored paramilitary police officers. Several over works spanning over different media told the sad story of the Kerberos Corps. Watch for an upcoming Anime Review blogpost on this important Anime!

One of the coolest character in all of anime is Captain Harlock, and one of the better works he was featured in was 1982's Arcadia of my Youth, and that OVA's story was extended for a Japanese TV series called: Endless Orbit SSX. Unlike the original Harlock storyline, here in the 30th century, Captain Harlock is a member of the Solar Federation that is defeated by the Illumidus Empire (green skinned aliens), and Harlock has been making a run shipping Terran civilians from the outer colonies back to Earth, where he is to surrender his Terran warship The Death Shadow. The Illumidus Empire has completely occupied Earth and demanded that all Terrans are relocated to Terra, and the former Solar Federation colonial worlds be for the Empire. During the OVA, much of the elements of the Harlock universe are spelled out, along with the lost of his eye. Overall, Arcadia of my Youth is the best Harlock anime, and despite a few issues, was an enjoyable film to watch over and over. Due to the extreme expensive of the old Arcadia of my Youth AKA My Youth in Arcadia,  had the Vengance of the Space Pirate VHS tape, and sometimes, I wish I hadn't got rid of it.

Funny title, eh? Cat Shit One is the anime of the 1990's military manga Apocalypse Meow by Motofumi Kobayashi that took place in the Vietnam War and in the early 1980's. The spin on this work is that humans are substituted by animals, Rabbits from Americans, Camels for Arabs, Cats for the Vietnamese, and so on, similar to Maus. In 2010, CG animation house IDA created Cat Shit One  that was intended to be a ongoing series, exploring the modern military adventures of Sgt. Packy and Botasky during War on Terror. So far, this is the only episode released. The animation is simply amazing, and the story is simple, but effective. The only bad element is potions of the dialog and the English voice-acting, Both could use work. By the way, for those that have wondered where my Xbox Live gamertag (Packy CSONE) comes from...wonder no longer.
Posted by William at 10:38