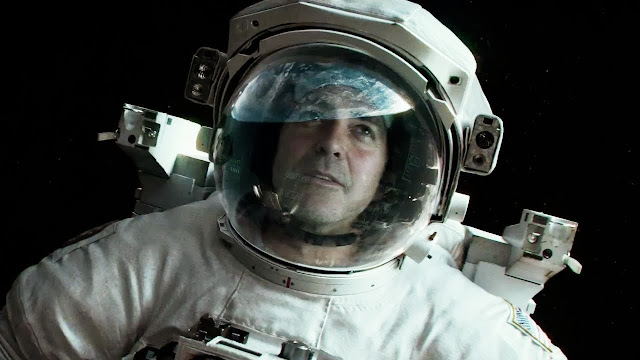 Movies set in space are nothing new, having been around since 1902's  La Voyage dans la lune and continues onward with films like Elysium, Ender's Game, and Prometheus. Within the cinema genre of space films stuffed with aliens, massive space fleet battles, and glowing red laser beams of death, there are movies like Gravity. Gravity occupies a small niche, dramas set in outer space complete with scientific advisers making sure that the filmmakers portray the final frontier in all of dangerous glory. For over a year now, I've very excited about this film and last Thursday, I dragged my wife to this one during a recent date night (space is not her thing), and saw Gravity in regular 2D because my wife is also not a fan of 3D or IMAX. Gravity stars George Clooney, Sandra Bullock, Ed Harris (voice only), and is helmed by Children of Men director, Alfonso Cuaron, and follows in the footsteps of other realistic space rescue films like Apollo 13 (1995) and Marooned (1969).


THIS IS A SPOILER-FREE REVIEW! 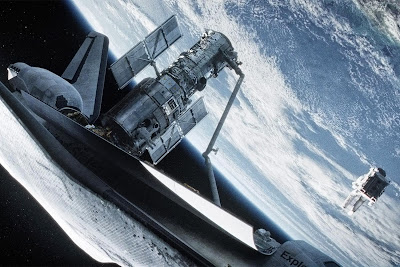 Gravity is set around 2014 or 2015, and unlike today, this alternate universe still has the NASA Shuttle fleet flying, along with a full-sized Chinese space station called "Tiangong", which is still in development to the extend seen in the film. The film opens with an American space shuttle mission (STS-157) to repair/upgrade the Hubble telescope and test a new NASA jetpack. On this mission is an legend in the astronaut corps, Matt Kowalski flying his last adventure in space (played by George Clooney) and first-time astronaut, Mission Specialist Dr. Ryan Stone. Dr. Stone designed the scanning upgrade for the Hubble back on Earth, and was selected to head up the mission. While Dr. Stone works on the telescope, pilot Kowalski is testing the new thruster pack. During this repair, the Russians use a missile strike to destroy a failed spy satellite, causing a hail-storm of debris and the madness to ensure. Gravity's script draws on several real-life space mission. Specifically, STS-61 (1933), STS-82 (1997), STS-103 (1999), STS-109 (2002), STS-125 (2005) for the Hubble repair aspect. For the MMU-style thruster-pack, Gravity borrows from STS-41B and STS-41C (1984) and STS-51A (1985). 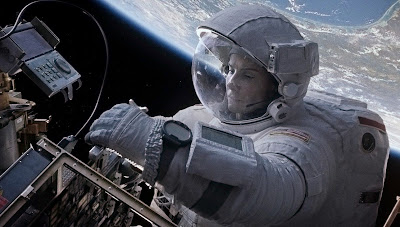 Intensity. That is best word to describe the experience of seeing this film. While the run time is 90 minutes, the film feels shorter due to rapid pace. My wife asked me when the credits rolled why the film was so short, then I looked at my watch...those ninety minutes had flown by! What a ride! Gravity is also the rare hard-science space movie that truly captured the wonder and terror of working and living in outer space. There is also a great deal of depth to the feeling of space, and that is the main setting for this film, the vastness of outer space, even with Earth below the actors. 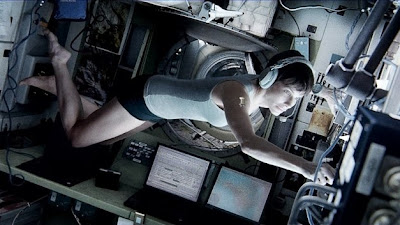 In contrast to the emptiness of space is the crammed nature of the space station and space shuttle, that communicated more of the harsh realities of life in space. To create the world 600 kilometers above the Earth's surface, state-of-the-art SFX was used, and it is simply stunning. You feel transported to geosynchronous orbit, with all of the risks and terror. One element I respect the film-makers for is the lack of sound in this film. All hell can be breaking lose (and often does), but not one sound is heard beyond the closed world of the astronaut's spacesuit. Propelling this intensity is the tight script, the talented actors, and mountains of emotions. Gravity could be another winner for Sandra Bullock during award season. She is that good, and so is the rest of this jaw-dropping film. 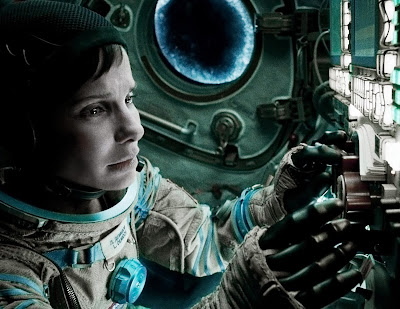 While Gravity is a beautiful, artful film that could win some major awards, it paid a high price for the intense tone throughout the ninety minutes. Much like FOX's 24, Gravity is propelled by an intense survival story that is constructed to be thrilling. Gravity could suffer in repeat views by the viewer knowing the outcome of Dr. Stone's wild ride in geosynchronous orbit. I know that the times I've tried to go back, and watch 24 again, it is not as enjoyable...could Gravity be there same?  In order for Gravity's story to flow, some liberties have been taken on the part of the position of certain items in GSO, namely the space shuttle and the ISS, which in terms of Earth orbit, are not in the same neighborhood. For example, Kowalski's thruster-pack is based on the NASA MMU from the mid-1980's, and it never moved from prototype to standard issue. Then there is the position of the space shuttle Explorer, the ISS, and the Chinese space shuttle, which all appear to be in the same orbit...which they are not. When Sandra Bullock is seen out of her spacesuit, she is lacking the liquid cooling layer, and the spacesuit gloves are shown more flexible and useful than the real deal. Will you notice these if you are not an uber space geek like me or someone with a science degree? Most likely not. 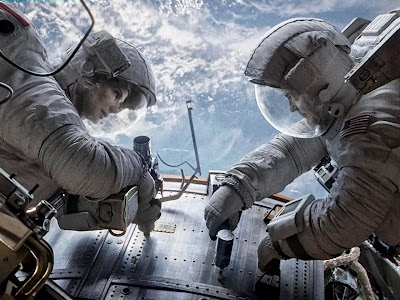 Gravity was a date night movie for the wife and I, and it took some convicting to get her to see this a "space movie". Over dinner and a beer, my wife and I discussed the film. Even after an hour, she was still unsure if she liked or not. While she acknowledged the level of storytelling and the excellent quality of the director and SFX, she asked me a number of question during the film about how realistic X or Y was. Take in account, that my wife is a national merit scholar. In order to truly enjoy the highs and lows of Gravity, you need to understand the harsh realities of outer space and space travel. If you do not, as my wife pointed out, than you enjoy this movie less than others in the theaters currently.

Should You See GRAVITY? 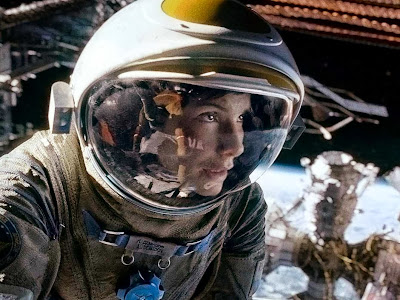 YES! If you are into the space program and/or thrillers, than go see this film, especially in 3D or even IMAX 3D, as it was intended by the movie-gods. Gravity is an amazing piece of film-making with a compelling powerful story to tell of human endurance and intelligence. Everyone is at the top of the game in Gravity, behind and in front of the camera. This is one of those movies that should be experienced in the theater. Go. See. This. Film. Today.