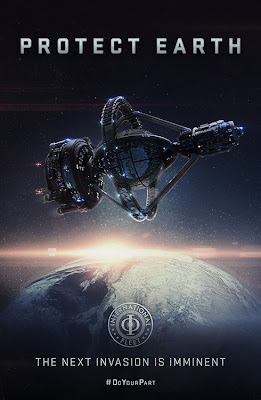 Over the last two weeks, the Summit studio's advertisement and social media campaign has increased the feed for the upcoming military science fiction film ENDER'S GAME, due out November of 2013. This could be in part to a internet boycott movement fueled by the very extreme anti-homosexual views of Orson Scott Card. Two videos have been released featuring Harrison Ford as Colonel Graff. One is the welcome video to Battle School and for the new meat to remember the invasion and the heroism of Mazer Rackham. The invasion footage shows swarms of alien drones or fighters being engaged by Terran fighters in the atmosphere that seem close to the new F-35 JSF. The second video is in-world advert for the citizens of Earth to see if their children as what it takes to be admitted to the International Fleet Battle School and lead Terra's finest in another alien invasion. There are two links embedded into the video, taking you to sites about the signs of another alien invasion and a battle school aptitude test. These videos shows off the amazing set design and costumes of the upcoming film. Criticism has arisen, some citing the deadpan performance of Harrison Ford, and his lack of energy, along with similar to the 1997 Starship Troopers in-film adverts for citizenship. My hope is that this film sparks new followers to MSF and to FWS...