Pop a cork, and lift a glass....FUTURE WAR STORIES is THREE Years Old! It is amazing to me that my little military science fiction blog is now three years old! Simply amazing. I want to take this opportunity to thank everyone who reads, comments, and tells people about the work that is going on here. From the bottom of my geeky heart, a big THANK YOU to all of you!! Seriously, while FWS is written by me to advance the conversation on military sci-fi, if people weren't reading or commenting on the blogposts I don't know if FWS would still be around. Every year on the summer anniversary of FWS, I like to take the opportunity to inform you of what is happening with FWS. In the next year, we will be seeing new video games dropping, with some MSF title like Titanfall and HALO 5, and Call of Duty: GHOSTS, and even new ROBOTECH...well, sort of. In regards to the blog, not much will be changing...the work will continue, and the blogposts will flow. There will be more book reviews will be coming on FWS, authors have been reaching out to me with their e-books for review and interview. At the time of the blogpost, I'm reading the excellent Strings On A Shadow Puppet by T.L. Evans, and I will be reading Constellation by A.A. Smith after. Watch for those! For those are interested in some events within my own life, I've submitted my book to a few more publishers, got an artist for the T-shirt, and my beloved tortoiseshell cat, Ginger, died several weeks ago after seven wonderful years has our kitty. I was raised by a crazy cat lady, and I've always been much more into cats than dogs, Ginger's death was difficult to take. Ginger was a young cat and taken by a fungal respiratory infection that we could not seem to cure despite great expensive and daily injections. The day that I had to put her down was one of the worst of my life in recent memory. Anyway, here are some websites that I think are worth a shout out here on FWS and thanks for reading...onward to year FOUR! 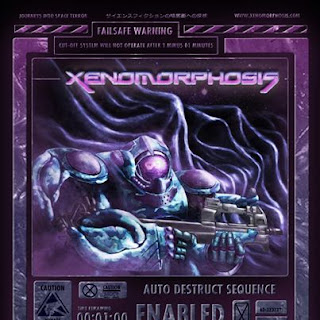 It's no secret that Derek's science fiction site, Xenomorphosis.com is basically companion site to FWS, and that we have been working on a few projects together recently. Originally, Xenomorphosis started off exploring the dark side of science fiction, and recently expanding their mission to covering sci-fi as a whole. I must say, that Derek's reviews of Prometheus toys, movies, video games, and some recent freelance work is much better than my own here on FWS. I highly encourage you to visit the site and buy a t-shirt!
http://xenomorphosis.com/ 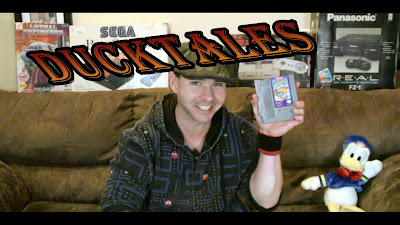 I ran across Dan "Half-Bit" O'Neil via his review of the old NES Total Recall and have loved his channel ever since. Half-Bit is about the same age as me, allowing to experience gaming in a similar manner like I did. Besides reviewing interesting games from games gone past, his review are fucking funny, with creative use of himself as various characters, and have always kept me smiling. Recently, he was forced to take a break due to personal reasons, but he  returned to youtube on the 15th of this month. Welcome back Half-Bit! If you love classic games and/or funny videos, give Half-Bit a visit. http://www.youtube.com/playlist?list=PLF705AB508DCE4741 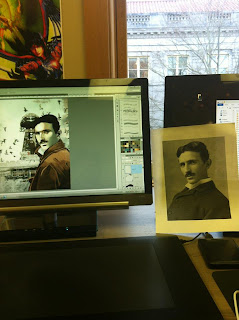 Paula, who runs 7Hunters studios is not only crazy talented, but one of the more interesting people I've ever known. Paula and I go way back to the early 1990's, when we dated, but she was someone has always regarded as someone I was glad to have known. When we got back in touch in the 2000s, we worked on a joint writing project, and have become good friends. Paula's current business is vintage video game posters and her own amazing art. Stop by and be amazed!
http://www.7hunters.com/welcome-to-seven-hunters-digital-arts/ 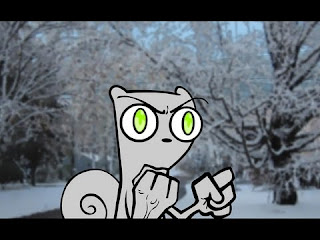 Met your new lord and master, Foamy the Squirrel! After the death of my beloved cat, I need to cheer up, and youtube answered me with this: Neurotically Yours with Foamy and his owner, the goth-chick Germaine. Not only is the situation humor funnier than hell, but the rants by Foamy are one of the greatest things on the internet. While these rants are designed to funny, they are greatly insightful, especially the video on Gay Marriage and Video Game Rating System.  Yes, dear readers, Foamy is my new lord and master. http://illwillpress.com/ 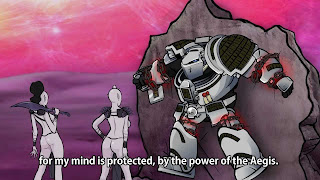 If you love Warhammer 40K than the videos and webcomics by Flashglitz Animation will be some of the funnest shit you've seen on youtube. They are just funny, but well-crafted animation with situations and humor that are deeply rooted in the dark future of the 41st millennium. Personally, the Trials of Draigo and Space Hulk II is one of the better web-based animations ever done. It is worth your time to check this shit out! http://www.flashgitz.net/ 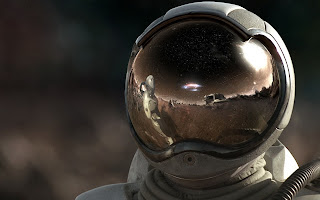 Fellow blogger member Steve Prideaux runs a blog devoted to "the culturally history" of spacesuits and spacemen in media. Not only does Steve know his subject, but he also picks from all range of TV shows and movies, allowing for one of the best resources on the internet of spacesuits in media. Often times, he had cite similar examples of fictional spacesuit design to another. This is an impressive site.
http://sayhellospaceman.blogspot.com/

The Archaeologist's Guide To The Galaxy 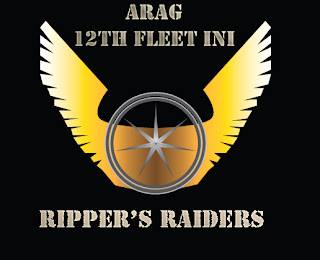 Thomas L. Evans runs a wordpress blogsite devoted to his own fictional work on the Sphyan Empire, and reviews works that he reads. I knew that I would love this site, when the first words on his "about" section was: I love reading and that he has a degrees from some of the best colleges in the western hemisphere. Some serious strong writing and reviews are populating this rare sites that combines serious literacy standards and science fiction. Recently, I had the privilege of receiving T.L. Evans' book Strings on a Shadow Puppet,and it is one of the strongest MSF books I've read since Old Man's War.
http://sophyanempire.wordpress.com/ 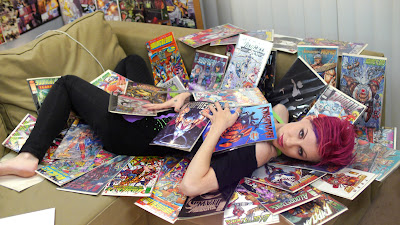 CBG19 is the real deal, a die-hard honest comic book geek that knows the medium and creates amazing videos that are both insightful and enjoyable. I found her channel a few months ago while googling the movie Prometheus and came across her several part video series on this maddening film. I personally believe that CBG19 is on the edge of massive appeal and fame. Oh, and she gets bonus points for having an hairstyle similar to the Star Wars: Droids character Thall Joben. Oh, and she loves to say "fuck"...which very cool in my book.
http://www.comicbookgirl19.com/