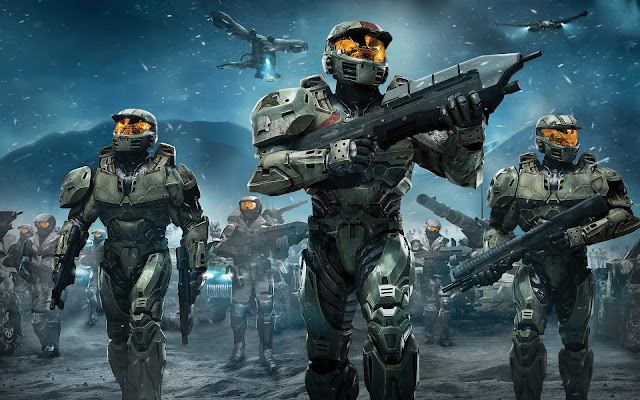 By the topic header, you can guess what the next major topic of discussion that will be appearing on FWS...Powered Armor! Since the establishment of this blog some three years ago, I have yet to discuss powered armor in depth despite beign one of the bedrock concepts in MSF, but that is about to change in the next two weeks. I simply love powered armor and works that feature it. So, before we discuss powered armor ad nauseum, I thought I should cover my top 10 favorite examples of powered armor, giving some frame of reference for my thoughts on the upcoming blogpost. The Powered Armor blogpost should drop in about two weeks, because of the amount research and size of the blogpost. BTW: these suits are in no order of importance. Enjoy!

1. The Clan Elemental APS from Battletech

I first became aware of the Elemental battle armor when the Technical Readout of 3050 was published 1990, and in the first few pages, the Com-Star researchers talked about "the Toad" powered armor that was unlike anything seen by the Inner Sphere, and the first engagements, the mech-warriors believed that they were under invasion by an alien species. While the armor is very cool, and able to take down mechs while operating in hunting packs, the pilot are also interesting. In the Clan society, the Trueborns are artificially bred for war, and they become the Elemental, the genetically Trueborn infantry of the Clans, and wearers of the specially designed battlearmor. This is one of my favorite designs of powered armor, and I still own my 1994 Tyco Battletech toyline release of "the Toad" Clan Jade Falcon battlesuit. FWS will be covering the 1994/1995 Tyco Battletech toyline in the near future.

2. The AMP Suit from AVATAR

There is no secret that I fucking love the movie AVATAR and one of the elements I loved most was the live-action badass AMP suit. This one of those design that is both science fiction and science fact, and best of all, the movie highlighted the advantages and disadvantages of APS in combat conditions. The moment, I saw this glorious piece of future technology on the IMAX screen, I knew I had to write a book all about powered armor...and yes, I do own the toy...just don't tell my wife!

There is little doubt in my mind, that without Iron Man first arriving on the scene in 1963 in the jungles of Vietnam, the theme of powered armor as a whole would be less popular and different. Most of the people creating powered armor in science fiction medium today, have read, played with, or watch something to do with Iron Man. I was never much for superhero comics, even when I was a kid, but something about Iron Man got to me, especially how realistic the character of Tony Stark was, and it became one of the few mainstream comics I read and collected  starting from around issue 183-216. This red and gold suit has become of the most iconic CLASS-ONE powered armor designs of all time.

4. The Bioroids from ROBOTECH: The Masters 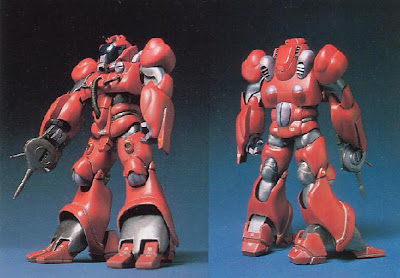 The sad truth is that the ROBOTECH Masters storyline never lived up to the promises it made, nor did the original anime, and it is largely overlooked by even fans of ROBOTECH. Which is sad, because one of the most clever elements in The Masters was the CLASS-3 bio-mecha-powered armor Bioroids, the mainstay of the ROBOTECH Masters military forces in their campaign to wrestle back the Protoculture factory from the wreck of the SDF-1. This was a very cool design, that had an interesting control system that allowed the pilot's nervous system impulses to control the mecha-suit. I could easily have believed that the Robotech Masters had developed this technology to combat their main foe, the Invid.  This is one of the best examples of the CLASS-3 type of powered armor.

Okay, I'll admit that this is a douchebag move by me adding my own MSF novel to the mix here, but I really love the design of the Dragoon powered armor in the novel. Partly, because I spend a month on R&D to get it right for the more "hard" science fiction element of the novel. I based the design off of the AMP suit, and added touches, along with variants on the main armor, including a very cool British sniper variant. If my book ever gets published (fingers crossed!), and is successful, then I two more books planned that will show the continued development of the armor and the women behind the controls.

6. The MJOLNIR Powered Armor from HALO 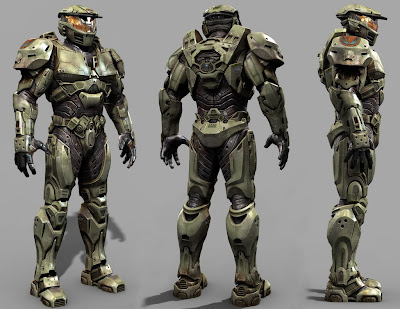 HALO is one of the finest MSF proprieties ever developed, and has been able to reinvention some many of the tired genres of MSF, especially Super-Soldiers and Powered Armor.There is no doubt, when you play HALO as the Master Chief or a member of NOBLE Team, you feel like a god of slaughter, and the armor is a big part of that. This MJOLNIR armor is so well designed, that it simply as fucked the couch for most CLASS-ONE powered armor designs that will come after it...it is simply that good of a design and that well known, along with the Iron Man suit.
7. The Hardsuits from Bubblegum Crisis 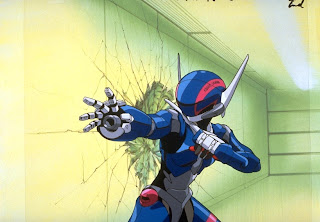 I'll admit it...I love this 1987 anime that combined elements of BLADE RUNNER, classic anime themes, and cyberpunk, along with hot girls in hot armor. I am not a fan of the 1998 BGC:2040. In the series, Sylvia Stingray's father, Dr. Katsuhito Stingray, was one men involved with the development of the Boomers, and was later murdered. Sylvia forms the Knight Saber's and their Hardsuits that differ from character to character. It is hard to explain, but for some reason, Bubblegum Crisis and the Hardsuits really left impression me.


8. The Powered Armour of the Space Marines from Warhammer 40K 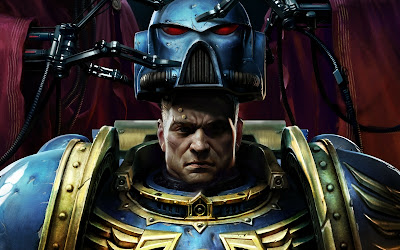 When I was a small lad, and going to comic book stores in Tulsa, I saw in the back of the store where they keep the RPGs, and there on those boxes was some of the most amazing art featuring monsters, gunfire, violent, and massive human where these fantastic powered armor. This left an impression on me that I could not shake, and I think to this day, that the children of the Mobile Infantry are the Adeptus Astartes. 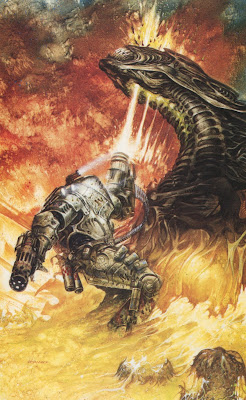 One of the best and most disrupting ALIENS comics of all time was 1991's ALIENS: Tribes. This tells the tale of a special team that is sent in to purge the xenomorph infestation on a space station. While the special works to hive, the juggernaut of the unit sleeps in a ocean of drugs. The MOX-16 nicknamed "the Shitkicker" is the god of war in the unit, and is brought out of the haze of a drug-coma when the need for slaughter is requested. The Colonial Marines developed the Mobile Offensive Exo Warrior (MOX) project after the successful use of the Power-Loader against the xenomorph queen on the USS Sulaco. This powered armor is nothing special in terms of design, but is armed to the teeth with a grenade launcher, flamer, and 10mm rotary canoon, and enough drugs to kill a cow. The flesh inside the machine was the berserk. This were the bat-shit-crazy homicidal manics in military service
that were used for one purpose, killing.This dude encased armor and guns is one bad mother fucker, and the writing in the pages of the comic is prefect...I could never write anything that good. In the near future, FWS will cover the grim beauty is that ALIENS: Tribes.

10. The CryNet Nanosuit from Crysis 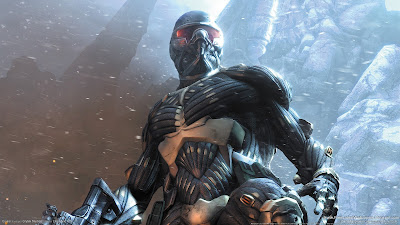 Unlike a number of other powered armor, the CryNet Nanosuit from the Crysis universe is unique, and very well done, along with the games themselves. Not only does the nanosuit protect the wearer from combat, but it renders them invisible, hardens the exterior when the serious shit happens, and allows for bursts of super-strength. All this, and it doubts as a bio-weapon. When I played Crysis 2, I was very pleased at the level of thought and design of the suit and the world it fights in...about time for me to get Crysis 3.