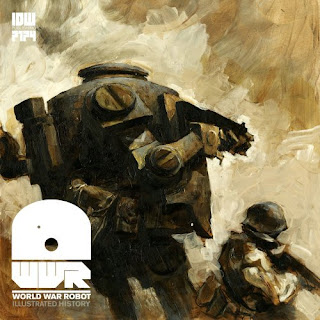 I came across a graphic novel by painter/designer Ashley Wood, entitled World War Robot during some web research. From the IDW website, I got this short bit of information on the plot:
"Award-winning designer/artist Ashley Wood (Popbot, Zombies vs. Robots) has handled his share of robots over the years. And now, he presents total robot war. In World War Robot, a dwindling band of humans and robots face off in a battle that will likely end humanity as we know it... on Earth, on the Moon, and on Mars, too. Badass battles, really intense human/robot drama, and even a little black humor and political intrigue are the order of the day in this oversize (one foot long by one foot wide!), standalone epic courtesy of Wood.
World War Robot is a story currently told through two art books (with a third coming!) by Ashley Wood of a world that develops heavy robotics and some degree of space travel, as 1980’s Earth is at war with its colony on Mars, which has declared independence. Both sides are supplied with their war machines by Rothchild Industries, based in an impregnable facility on Luna. The shadow organization NOM (Not Ordinary Men) is working towards some unknown motive, with their most prolific member Nom de Plume being something of the ThreeA mascot." 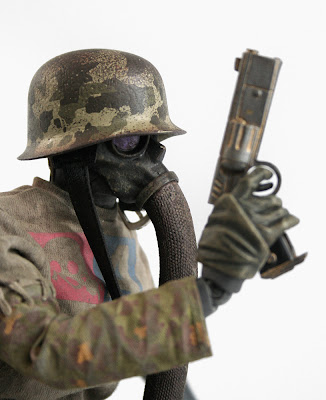 From the art and few other little bits of information, World War Robot graphic novel sounded like a fusion of World War One/Two alternate history coupled with robotic warfare throughout the solar system all wrapped in a bleak future.
I was hooked and immediately contacted my local Barnes&Noble to have them hold one...then Nigel and I preformed some recon on World War Robot. I believed that this would be similar to Shrapnel or even the excellent steampunk robot graphic novel Boilerplate. (if you have not looked at the Boilerplate, then you are missing out!)
However, when I got my hands on the one-foot-by-one-foot  hardbacked graphic novel, I was left confused by World War Robot.
While the art was stunning, bold, and often rich visuals on the desperate war-torn future, the story, what little there was of it, was placed on the bottom of these panoramic pages, in small black font. It seemed lost and detached from the brilliant and bold art.

This pieces of story were diary entries or letters, explaining some of the war and the desperate state of human. I was disappointed by the few portions of the story, contrasting with the hollowing visuals. It was like silent movie of a future war, but something was missing to me. 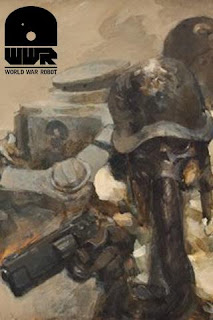 This experience with World War Robot reminded me of my disappointment with the Shrapnel graphic novel. If the art was to be the vehicle for the story and the primary purpose for the book itself, than the muddy and muted style was not up for that. Shrapnel was this way, the mecha designs were stunning online, however, within the pages of the graphic novel, they were too dark and unsteady to see the complex detail. Much can be said of World War Robot.
The images you see posted here on the blog, are from from the graphic novel, and more beautiful in person. I would love to have nearly all of these hanging in my study to admire for a lifetime...but the style does not give enough detail for me to finish off the story when the small portions of text leaves me with more. 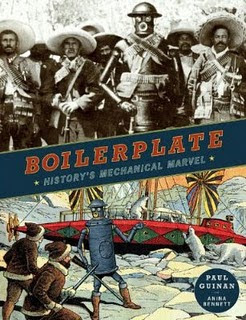 It is not the talent of Mr. Wood I have issue with, he is clearly one of the most talented artists I have seen in years. But, the style being drape, muted, and defused, leaves most of the action being portrayed in a depressed, lonely, and hopeless light.
Which gives the reader the gravity of the situation, but not the reason why this war and even where the action is happened most of the time. While the description from IDW said the Moon, Mars, and Earth, all of the painting could have been set in No-Man's Land in 1915, and I wouldn't have known the difference.
Some of the art should have been created this way, but not all of it. I wanted to see the soldiers, their weapons, and the robots to gain more information on the story itself. I have to google the images of the toys to gain more information of this dystopia that Mr.Wood has painted for us. I really wished that the 96 page World War Robot had been more like the Boilerplate graphic novel, where the art and story fused perfectly, leaved you feeling that your money was well spent. 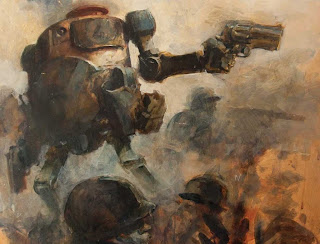 If you want more World War Robot, than Michael Bay might have you covered. His production company bought the rights to the graphic novel and a line of high-end toys is being currently produced, they sell for about $300. A line of action figures by ThreeA will be released soon as well. I am about to order the complete World War Robot cheaper from another source, then writing a limited fan flash fiction serial on this universe...to try a give the those beautiful painting some flesh and bone. The tentatively title is "the Cydonia Offensive," and will be told in six parts.
﻿﻿
LINKS

Here is a link to the toymarkers blog, ThreeA:

Here is the ThreeA wiki page: