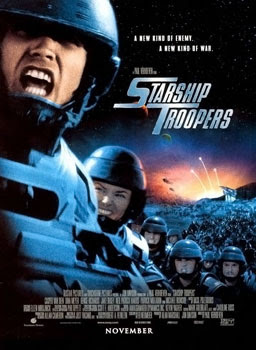 This is the FWS review of the 1997 film that was semi-based off the 1959 founding classic of Military Science Fiction by Robert A. Heinlein. Starship Troopers was a major release of that year and is one of few military sci-fi movies ever made by a major studio. The $100 million movie completely changed the theme, feeling, and the majority of the cast was setting of the Bug War from the book.
The film also vexes me deeply.
On one hand, the film is the one of the few truly Military Sci-Fi to show large-scale warfare in the future (I am not looking at you Star Wars Prequels!), but then on the other hand, it is not the film it should be.
Paul Verhoeven did a great job with Robocop, but his tongue-deeply-in-cheek style with the ultra-cartoon violence betrayed the movie that was to be our Braveheart...or Saving Private Ryan, instead we got a nicely made B movie.
What we should have gotten was is a classic, like Avatar or Aliens. 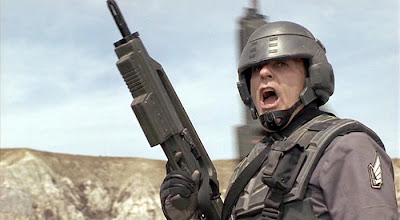 -The special effects for the bugs, this still looks good after 13 years.

-The location sites for the bug planets...looked alien without much special effects.

-The action on Klendathu and the post-action scenes at battle-station were grim, informing the viewer, in a visual method, the horror of this war.

-The Fednet. I think this was an excellent way to introduce the complexities of the Federation, the Bugs, and Federation society into a neat little package.

-The Federation can drive faster-than-light, make micro-nukes, colonize other worlds, but some how the concept of close air support is beyond them? Or even a light machine gun, or a grenade launcher? Did no one on the set think of combine arms?


-This flick broken the promise and protental of the novel, and that a good blockbuster movie could propel Military Sci-Fi into the limelight. It was Halo and Avatar that finally lived up milestone that Aliens set in 1986.

-The massive Morita rifle. Why would a bull-pup rifle need to be this big? Isn't that why who make a bullpup? To reduce the length of the total weapon while keeping a long barrel?

-The live-fire combat course-no one in their right bloody mind would do such a thing, especially with no protection for the troops and staff not on the course. We even have that in paintball!

-Throwing knives? I would love to see what a tiny throwing knife could do to warrior bug or even the M.I. trooper's body armor.

-The over-the-top acting, nudity, and emotions...ugh. 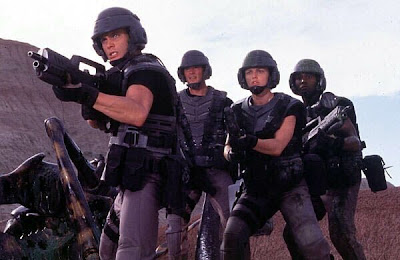 -The failure of Starship Troopers to be a great sci-fi war epic rests solely on director Paul Verhoven and the script writers. According to http://starshiptroopers.wikia.com/ states:
"Paul Verhoeven never finished reading the novel, claiming he read through the first few chapters and became both bored and depressed", in addition the website also says that: "the Heinlein novel was optioned well into the pre-production period of the film, which had a working title of Bug Hunt at Outpost Nine; most of the writing team reportedly were unaware of the novel at the time" 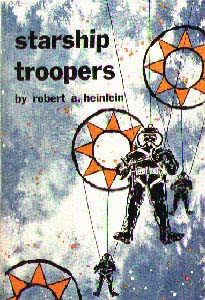 There have been rumors on the web for years that the Sci-Fi channel was going to make a mini-series out of the book, similar to Dune. Nothing, yet as come of it.

My Personal conflict with Starship Troopers 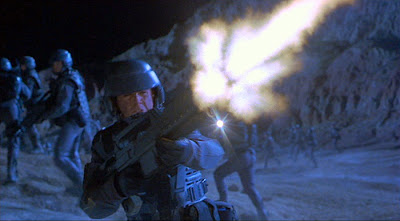 As I stated above, this film leaves me vexed. Do I love or hate it? Is it simply, well-made trash, or is there something greater under the layers of Verhovenness? For me to own this DVD, I bought it out of the $3 bin at Best Buy, however, since then, I have watched nearly a dozen times, and I cannot figure out why. I just seem to reach for it, sit back and watch the gore unfolded.
I don't like the mockery of the messages from the book, nor is most of the acting able to handle the emotions and drama of the scenes.
But...The action, locations, the Morita rifle (god help me!) and special effects are dead-on, and it is nice to see a real live-action, well-made, big budget military sci-fi film. I guess, I'll keep on watching it...until the Forever War comes out in 2013.