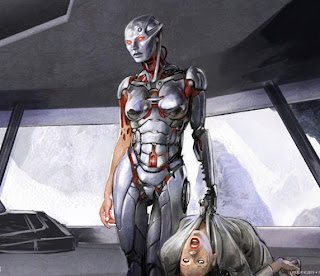 The first stunning image reminds me of the cover art for Queen's Champions of the World (see below), where the robot as killed the humans and looks puzzled. The clearly female Cylon in the B&C image seems to be the "missing link" between the biological Cylons and the warrior-toasters models. Here were can clearly see a flesh hand and some blood, maybe the first step. My worry, is that B&C will be venturing close to the Terminator universe, instead of developing elements from the classic Battlestar series. I wonder while looking at it, if the female Cylon was assigned to this outpost, or the humans were advancing Cylon technology will the coup happened. 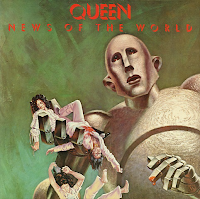 (This cover art haunted me as a kid, and this image of the Cylon holding the human make me have the same reaction.)

Here is some offical world on the series: "Executive producer David Eick is at the controls of the new series, with the plan being to present a more action-packed storyline than the now canceled Caprica prequel show."

"Battlestar Galactica: Blood & Chrome takes place in the 10th year of the first Cylon war. As the battle between humans and their creation, a sentient robotic race, rages across the 12 colonial worlds, a brash rookie viper pilot enters the fray. Ensign William Adama, barely in his 20′s and a recent Academy graduate, finds himself assigned to the newest battlestar in the Colonial fleet’ the Galactica. The talented but hot-headed risk-taker soon finds himself leading a dangerous top secret mission that, if successful, will turn the tide of the decade long war in favor of the desperate fleet."

Here we have the second image, and this is appears to be a early Raptor being chased by a classic Cylon raider through some ruins. 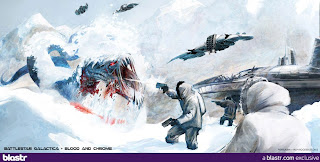 The third piece of concept art shows a snowy battle scene a base. This brings back memories of the classic BSG and one can clearly see the bridging of the old and new here. Coupled with the image above, I believe that one of the first battles between the Cylons and the Colonies will take place on a Arctic research station...The odd snowsnake is something that B&C would have to introduce in a clever manner to sell it.
Battlestar Galactica: Blood & Chrome will be out some time in late 2011 or early 2012 as a miniseries, then, much like Galactica it may be developed into a full-blown frakking series.
While the BSG crew may have frakked up with Caprica, Blood & Chrome will be a return to the roots of the series and answering some questions that have been hanging around since the series...also, B&C will be a nice chance to bridge elements of the classic series into the new Battlestar universe.