FWS Topics: What Ever Happened to The Osiris Chronicles? 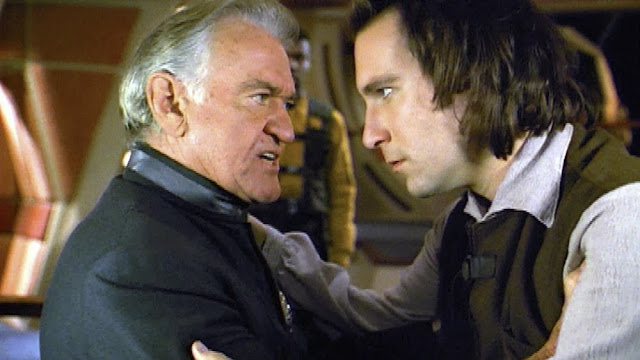 Okay, let us set the way-back machine to 1995, when there was science fiction on mainstream TV, music videos on MTV, John Steward has his first TV show, and Riot-Grrrl was much cooler than Grunge. I was a high school, senior, driving a red 1994 Pontiac Grand-Am GT, and wearing Doc Martins, and dreaming of college and college girls. With the success of TV shows like The X-Files,  more sci-fi was being developed by the major studios to cash in on the trend. Major networked aired such sci-fi titles as the X-Files, Space: Above and Beyond, SeaQuest DSV, Earth: 2, Hercules, Babylon 5, ST: Voyager and Deep Space 9, and CBS wanted to get their hat into the arena of sci-fi TV, like they did with their ER copy Chicago Hope. The vehicle for the CBS network sci-fi show was penned by Caleb Carr and starring Northern Exposure's John Corbett, and was titled "the Osiris Chronicles". There was press that the time of this incoming space sci-fi adventure show in 1995 and 1996, but then it all up disappeared. It would have completely disappeared from my memory if it had not been for my Forgotten Classics Enemy Mine blogpost. While research Carolyn McCormick, I found in her IMDB profile, starred in something The Warlord: the Battle for the Galaxy...I starred digging, and then memories came back of this long lost aborted military sci-fi series and I asked myself...what did happen to the Osiris Chronicles?

The Basic Plot of The Osiris Chronicles

2391 is not a good year to be alive in the Milky Way. For over three hundred years, mankind has spread out beyond their dying homeworld to colonize the stars and form the Galactic Republic. For centuries this republic ruled the worlds of man fairly, until boredom...yes, boredom and other petty issues cause a galactic civil war, and the end of the Galactic Republic, along with the high living standard enjoyed. When the pilot opens, the Galactic Republic has been gone for nearly a lifetime, and a new generation grows up in a era of lawlessness and technological breakdown. John Corbett played Jason Thorpe, a sort-of-Han-Solo character who has a brilliant ten-year old sister named Nova, and they live on Caliban 5. 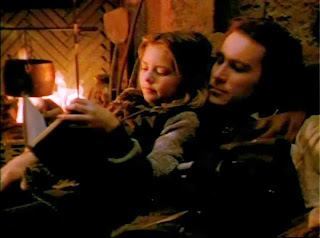 Both were orphaned and forced to fend for themselves. Word spreads of Nova's superior intelligence, and one day, she is abducted in a cloaked spaceship. Spaceships in the 24th century are a rare thing, and only one is fully functional on Caliban 5. That old Republic warship, the Daedalus, and is under the control of a local warlord named Heenoc Xian, and he refused to help Thorpe search for his sister. Now we have a quest, ladies and gentlemen. To get off-world, Nova best friend, Maggie Sorenson is not only a ace space pilot, but her father is an old General of the Grand Army of the Republic, and happens to have an old Republic warship, called the Osiris. The only issue is that Osiris's Tachyon engines are off-line, and only one race, the Engineers (who could be human...like the Navigators from DUNE), can fix it...for a price. To find the repairs, Thorpe steals jewelry fro Xian's crib, and hits up the Engineers. Once the Osiris is working again, a nice crew forms, and they are off to rescue Nova. 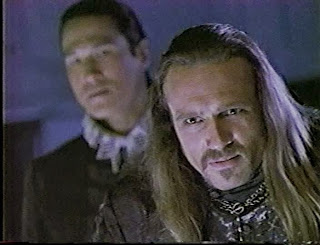 But wait! The warlord Xian mounts up his motley crew and fires up the Daedalus to chase down the Osiris. After a firefight, the Osiris escaped and the old general makes his real motives clear, he wants to get the band...I mean Republic back together, and the happy band of merry space travelers on the Osiris are just the ticket to that happening. Also, the old general tells Thorpe that the Engineers are the ones how abducted Nova. He just forgot to tell Thorpe that when the Engineers were patching up the ship. Over the course of an hour, it is learned that Xian is actually the man to reunite the galaxy, and that the Engineers were behind the collapse of the old Republic. With this knowledge, Xian and the old general unite after Nova is rescued. With the two old warships, the Daedalus and the Osiris, it is hoped that the Republic can be reunited and the show picked up. 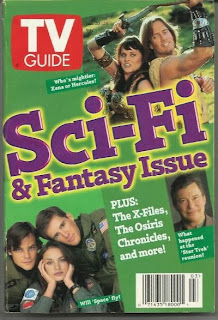 Paramount developed this military space adventure series with aim at being CBS' sci-fi series of note, and generated some buzz, for 1995-1996, that is. Featured articles in entertainment magazine like Starlog and TV Guide and Paramount studios released press statements about The Osiris Chronicles being the return of John Corbett's return to TV after Northern Exposure. I, myself, learned about this series via articles in Starlog and TV Guide. Part of the buzz behind the series, besides that it was being produced by a major studio for a major network, the story was crafted by Caleb Carr, author of The Alienist and military historians, along with the pilot was directed by Joe Dante. Much was made of this at time, especially in the TV Guide article. All seemed on track for The Osiris Chronicles to arrive on a small screen near you around January of 1996...then nothing was heard, and it passed into memory.

What Happened to The Osiris Chronicles? 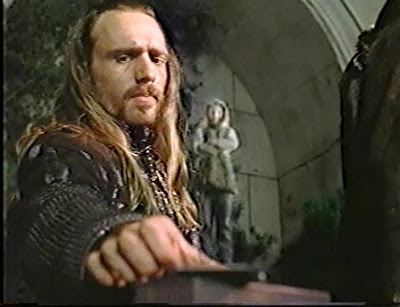 Due to Paramount being the producing company, hopes were high for another mainstream TV sci-fi series, however, nothing of the TV pilot was seen after a big spread and article in the January 20-26th, 1996 issue of TV Guide. It would take two years until The Osiris Chronicles would be seen in the form of a TV-movie-of-the-week on the old UPN network, retitled: The Warlord: Battle for the Galaxy. It would air only once on January 27th, 1998, and then be issued in limited release on VHS, mainly on rental shelves. It has seen disappeared, and some site have it for download. Much like Earth Star Voyager and Virtuality, The Osiris Chronicles would only been seen as a pilot-transformed-into-TV-movie, leaving some to wonder what could have been.

Why Was The Osiris Chronicles Shelved? 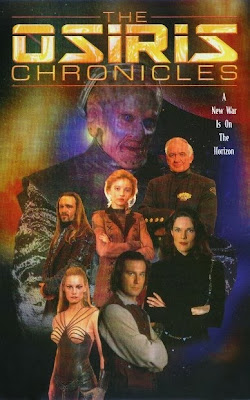 With all of the buzz around this series and sci-fi in general in the mid-1190's, why was The Osiris Chronicles abandoned by Paramount and CBS in 1996 and never given its fair shot? From what I've been able to gather with the limited resources online, it seems that despite $10 millions being spend on the two-hour pilot, it was rejected by the network, much like Ronald D. Moore's 17th Precinct, and never picked up by CBS or any other network for full development. However, when the pilot was being filmed, CBS/Paramount had such high confidence (or low confidence?) in The Osirius Chronicles that when filming was underway in late November of 1995, the studio ordered six back-up scripts to see where the series was headed. From this, it is likely that between the lackluster (and expensive) pilot and what they read in the scripts, that CBS saw an early death for The Osiris Chronicles and deiced to put it out of its misery. The rights and ownership fell back onto Paramount solely, who would decided to fill some random Saturday night in January of 1998 on their own UPN network. The Osiris Chronicles would be re-titled the Warlord: Battle for the Galaxy. This would be a similar tactic used for the failed Virtuality pilot for FOX. Throwing it away on a Saturday afternoon movie-of-the-week airing. 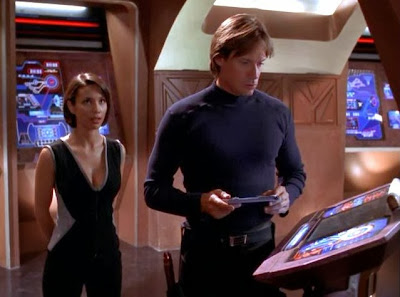 From various sources, I've read that Gene Rhoddenbury's Andromeda syndicated space series has links to The Osiris Chronicles. It seems that several key plot points were recycled for Andromeda along with the bridge set of the Andromeda Ascent warships being reused bridge sets from the Osiris warship from the failed pilot. Some believe that there was even more put into the basic DNA of Andromeda was filtered down from The Osiris Chronicles. However, the claims of some website have been refuted by loyal Andromeda fans.

Has Time Been Kind to The Osiris Chronicles? Or Was It a Good Death? 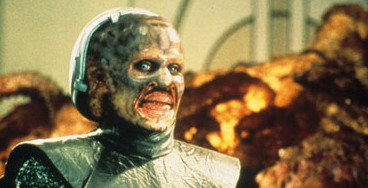 In a word...no. Most reviewers today who've seen in the old VHS release have dismissed it for it's recycled plot-points from The Foundation books along with poor production values, and an overall weak formula for a weekly TV series that couldn't attract fans of The X-Files and Star Trek. One of the best reviews I found online was of the British VHS rental release, and he said that given the uneven nature of the pilot, the one-dimensional characters, an attempt to setup the series, out-of-place action sequences, and "trite and clicheed" plot elements doomed The Osiris Chronicles to being nothing new or exciting...he even calls it dull. I guess it was a good death. RIP. This is the reason why The Osiris Chronicles was given a Topics blogpost and not an Forgotten Classics blogpost.
Read the full review here:
http://www.mjsimpson.co.uk/reviews/osirischronicles.html

The STARLOG #225 Article Scans (Finally!)
At one time, Starlog Magazine was the finest printed word in sci-fi, and in issue #225, Starlog profiled The Osiris Chronicles. Finally, after months of waiting, here we are! 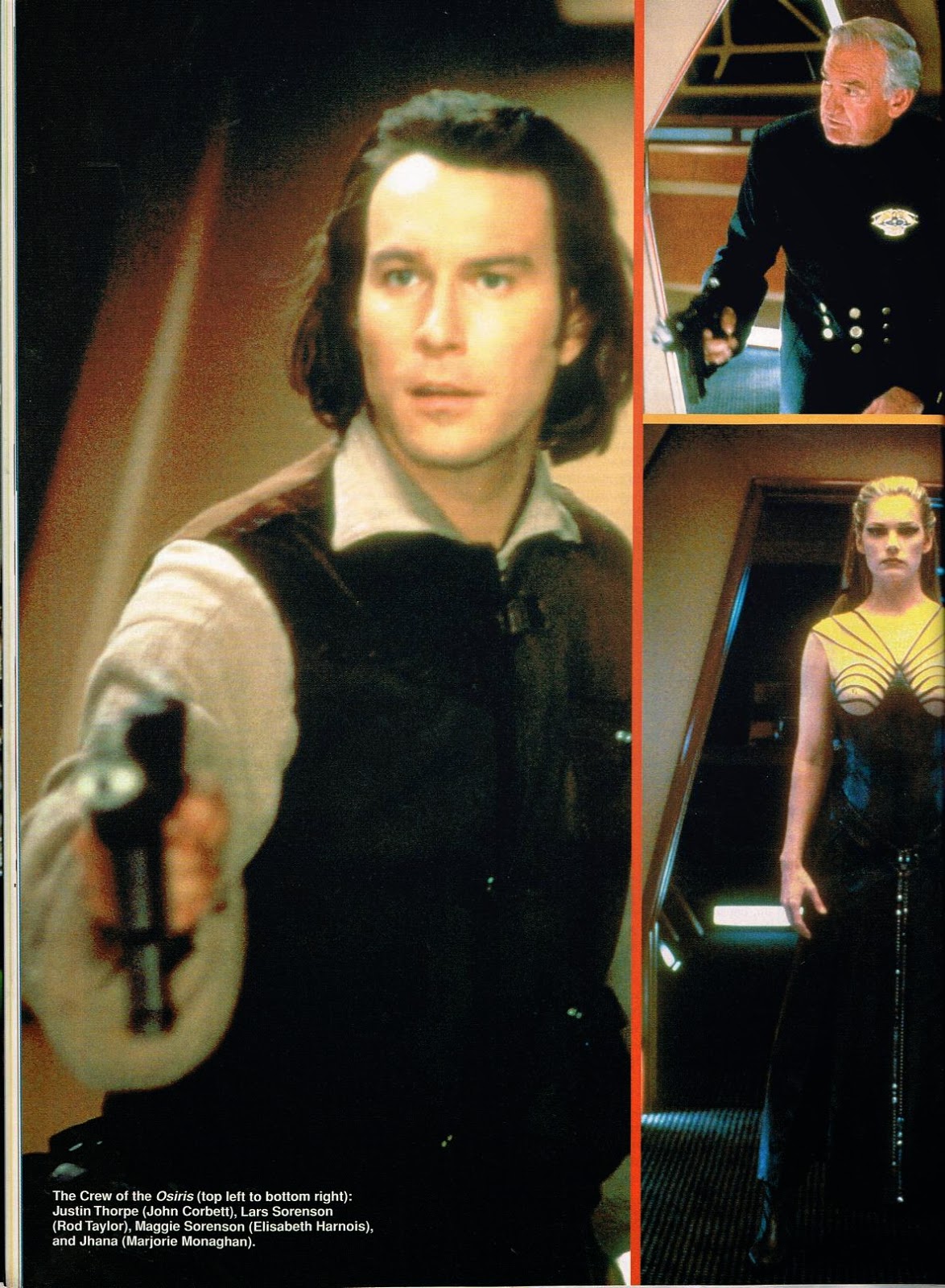 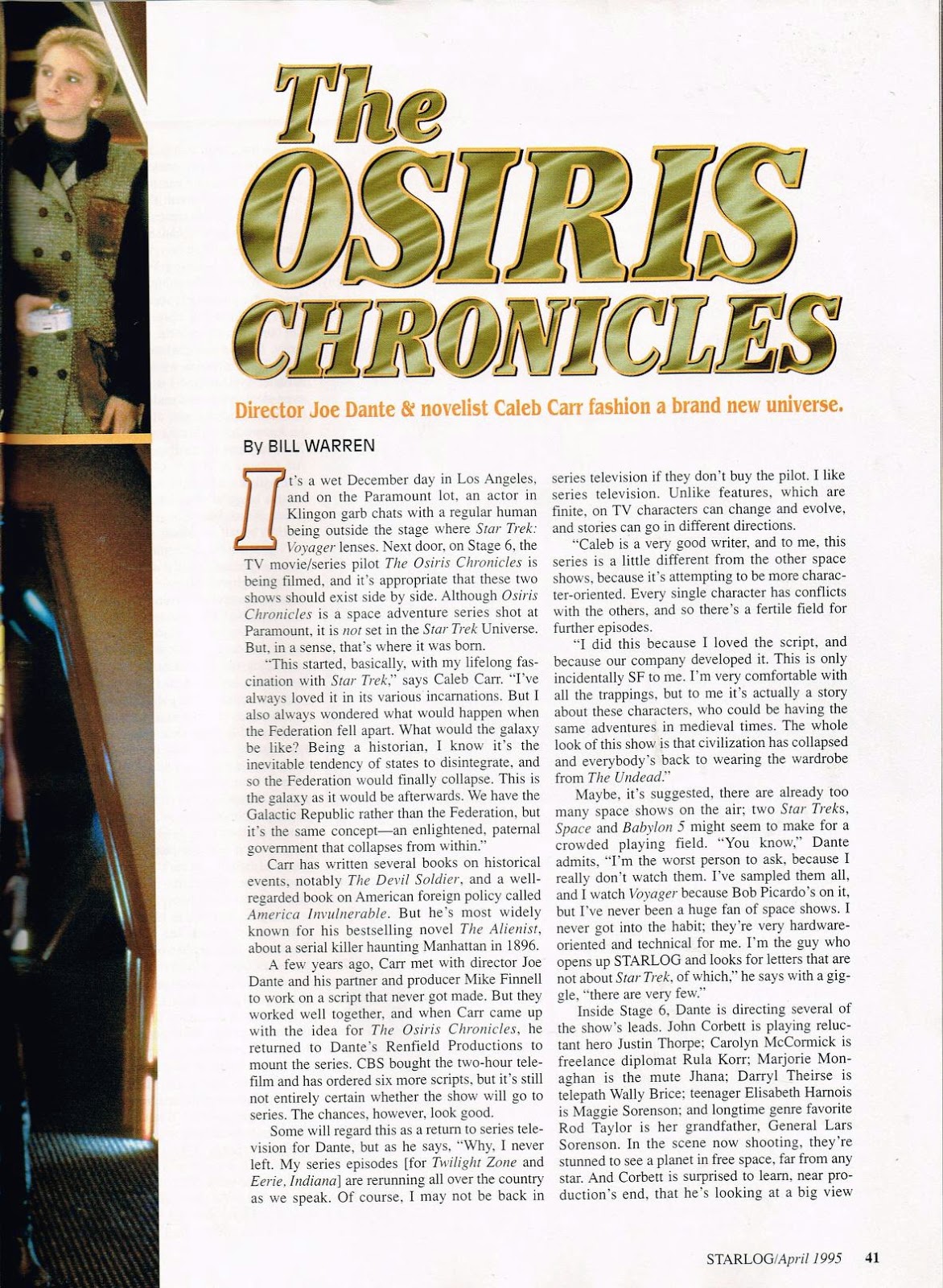 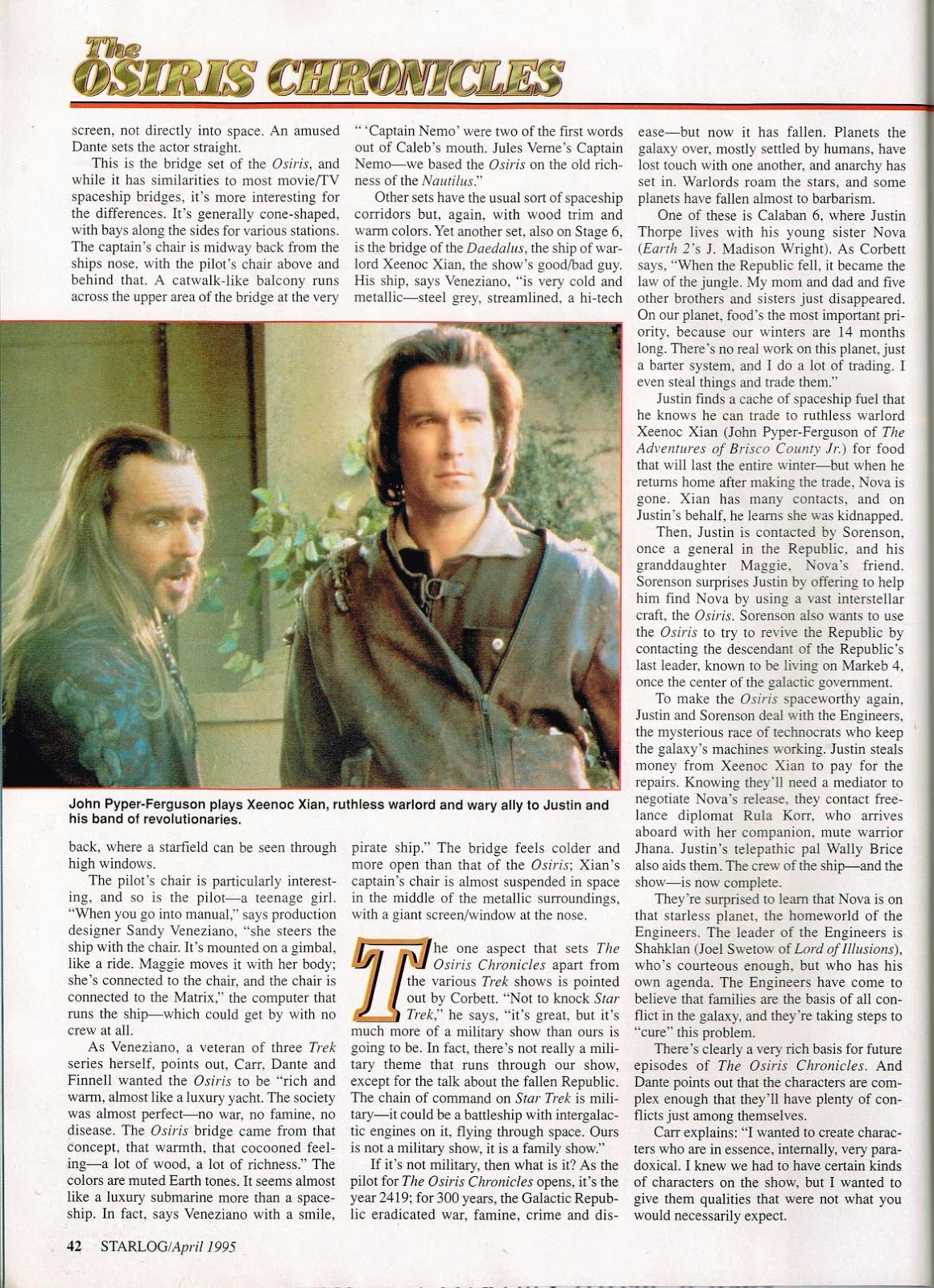 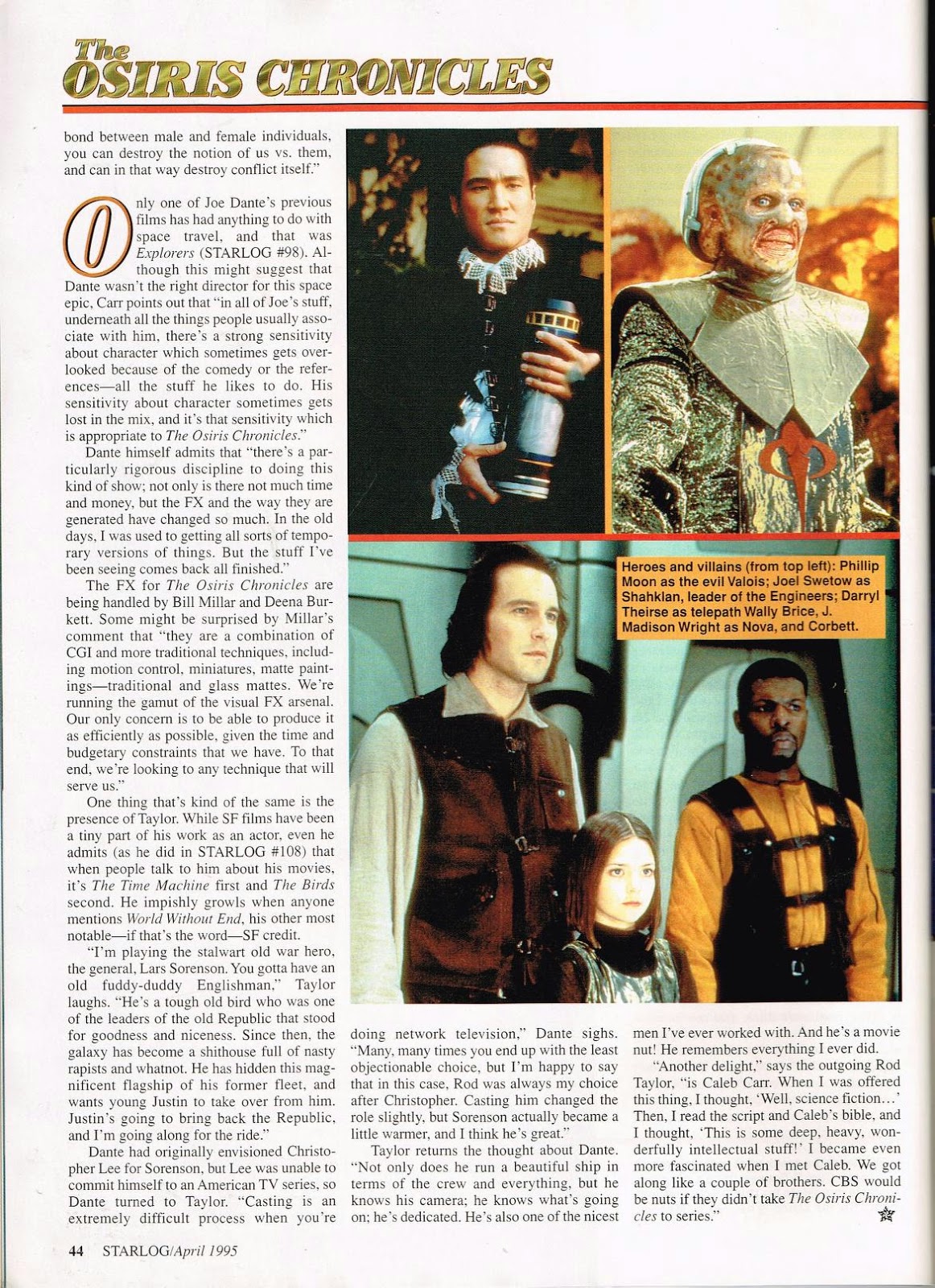 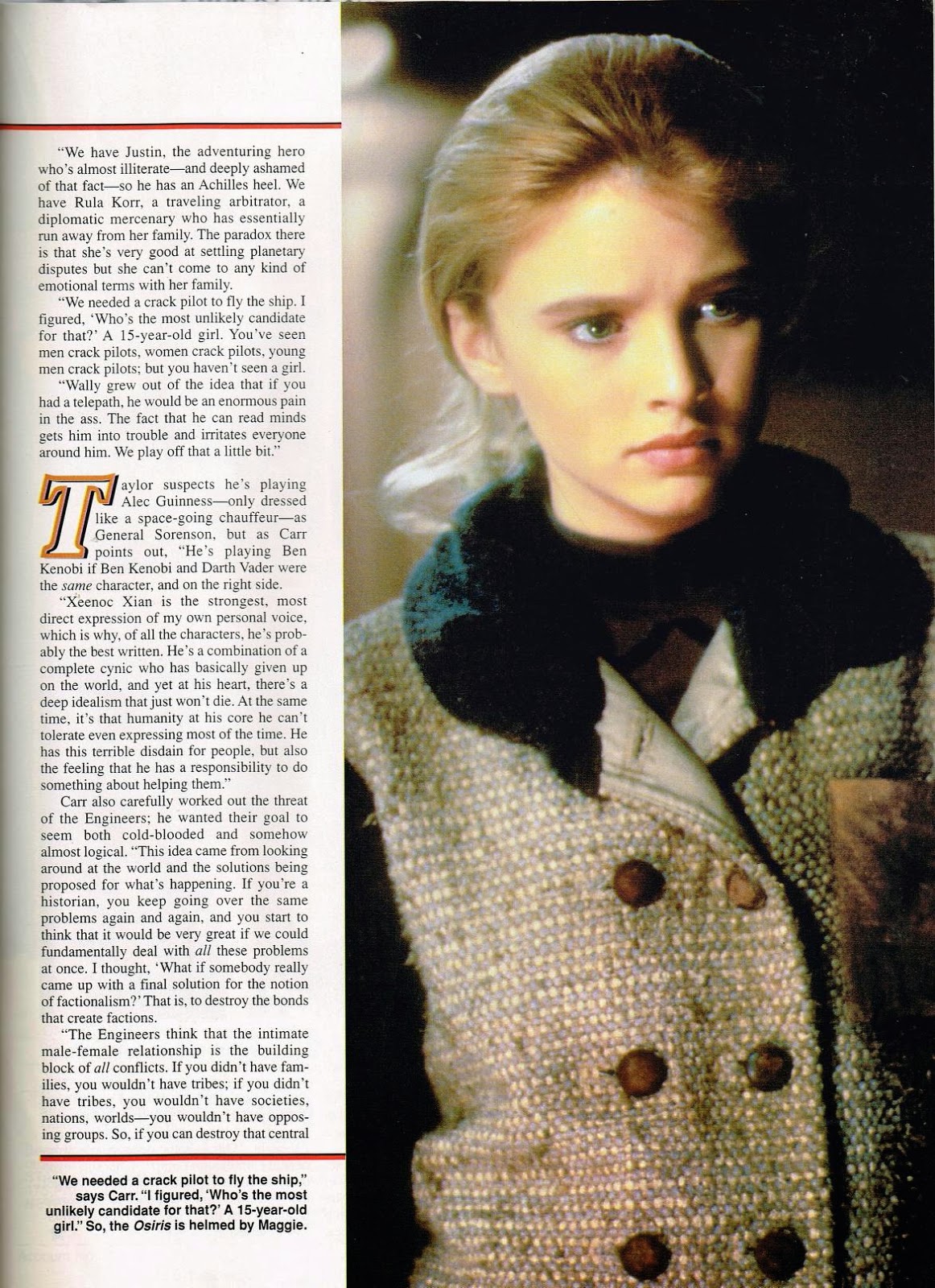