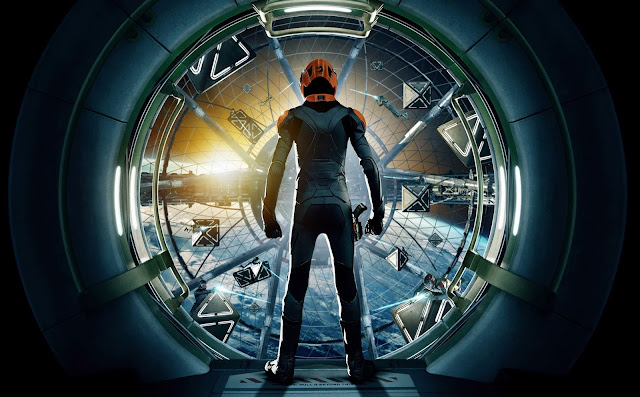 The next couple of years are going to see more military science fiction works coming to the big screen, and one of the bigger names in this trend is Ender's Game. The journey of this award-winning MSF novel has been a long one, mainly because Orson Scott Card was very protective over the film rights. In interviews, he openly said that he was concerned on how Hollywood would treat his work, and to avoid some of the evils of the studio system and how they have treated novels over the years. According to Card, Hollywood has been making offers on his book for years, and up until recently, Card refused. What changed? In 2003, Card wrote several screenplays for the novel to appeal to those that had not read the novel, and by 2009, all seemed in readiness, and moved quickly towards production and release. On a personal note, I read Ender's Game about two years ago for the first time, after buying the book when Borders was closing down. I was unimpressed with the book as a whole, finding it uneven with a overly complex plot for the material, and there were odd elements that should have been eliminated. Much like Minority Report and BLADE RUNNER, the movie could be better, in the general, to the book. Is Ender's Game such a film? Will it be more Blade Runner than Starship Troopers? I saw this on Friday, November 8th, at an AMC theater in Dallas in standard, but not IMAX  or IMAX 3D...didn't have the time. 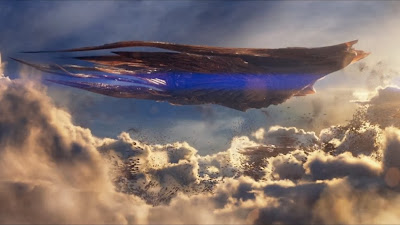 In 2086, aliens invade the planet Earth, and while they were driven back into space, we paid a high price for that victory against these insect aliens. Millions dead, the soul of humanity scarred and twisted, while everyone waited for the next invasion. Many years later, the next generation that has no memory of the invasion is being tested for their ability to aid the International Fleet in their goal of protecting Earth from another invasion. The whole of Terran society seems bend on never letting that happen again. Andrew Ender Wiggin is a third child in a world of birth limits, but his mind as allowed him to be educated at an elite military academy because he shows promise. But all it not well. His older brother is a future serial killer, and his doe-eyed sister is his only friend. After a brutal fight in school, he is taken away to the orbital training school for the International Fleet, and thus, Ender's future and all of humanity's, begins. 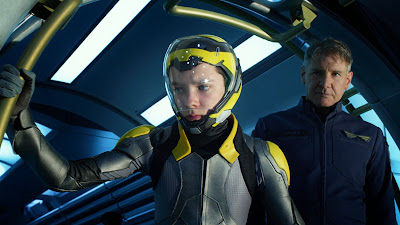 Ender's Game is a beautiful film with well thought out production design and special effects. Even some attention paid to realistic design of objects in space. This movie could give Oblivion a run for its money in terms of a sci-fi film that is appealing to the eye and ear. This realistic design nature is also seen in the more conventional launch of the shuttles, which was nice to see. However, while the film is pretty to look at, it is the power of Asa Butterfiled's performance as Ender that will truly amaze you. He nails the character in all his complexities. This is also true of of much of the rest of the cast, who (for the most part) turn in performances close to the original text. For most of us that read the novel, the element that had to be done correctly was the scenes involving the battle-room. Not only are these key events in the novel, but most of us just wanted to see this zero-gee combat room come to life on the big screen like we had imagined them. This film gets those scenes dead-on with impressive and brilliant special effects. While the amount of Battle-Room scenes in the movie are much less than the novel, the three battle-room scene are really stunning and carefully crafted to integrate later during the fleet combat scenes. 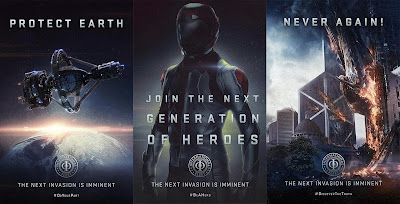 In terms of plot and pacing, this film is not slow, and attempts to high the major points of the book. Those who have read the 1985 novel will be pleasantly surprised that much of the book's major plot elements surrounding Ender and the war with the Formics are all there. One element that I was shocked to see was the mind game that Ender plays...didn't expect that. What really working in the film for me, which was less pronounced in the book, was the morality of using children to plan and wage war against these aliens. Touches throughout the film speak to the mindset of Earth and what emotion scars the Formic Invasion had on the collective consciousness of humanity. From Ender's Father, to propaganda posters, to Graff's character, all give a foundation to the actions of the Fleet and Ender. The film asked important question about how war changes us, and how much we are willing to commit to victory. One thing I was grateful for in the film was that is not the next Hungrer Games. Some have claimed that if done correctly, Ender's Game could become the next Hunger Games. Personally, I hated that fucking movie, and rolled my eyes when websites attempted to link these works and their film adaptations. Overall, this is a solid adaptation that enhanices the original text, and does not destroy it 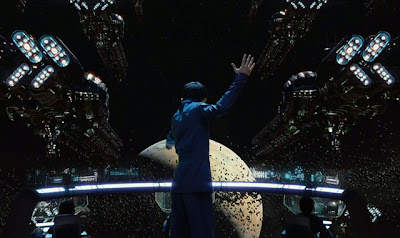 Ender's Game attempts to tell the story of the novel, and the filmmakers were hellbent committed to that goal, even if it meant running over some scenes and the overall story. Most of the supporting characters, including Ender's family are mere set pieces, that is also true of his Battle-Room battles. There are only two scene in the film, while the book devotes page and page on it and the importance of the games to the society of the station. No more is the warp-speed pacing seen in damaging effect than during a key moment in the book as well as the film...when Ender leaves Battle-School and hides out a lake house. In desperation, Graff brings Ender's sister to convince him to rejoin the school and the war effort. The film simply does not pull it off, the acting, writing, and setup are all broken, and feels like when you grid a gear. I just preyed that the movie moved on and we got back into space. This film does captures some fantastic performances by Asa Butterfield, Harrison Ford, Viola Davis (who I loved in The Help) but features some bad performances by the child actors that orbiting around Ender and his life at the battle-school. Some are so ham-fisted that they come off as comical. 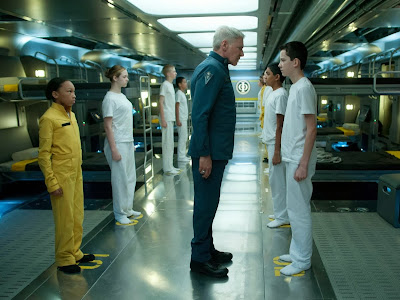 There are three elements that are ugly in Ender's Game. The primary ugliness is due to the rocket-speed pace of the film. While they did cram every major plot element of the book, they also wiped out some of the emotions, making the movie hollow and cold. It reminds me of the Tour de France. Those riders are racing through one of the most beautiful counties on Earth, and they are laser-focused on meeting those objectives that they pay little attention to the beauty passing before them. The only times that emotion really comes into play was the last few minutes, after the big battle, during the conversion between Graff and Ender, and it really brings things home. 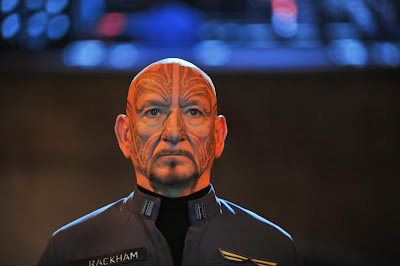 The last two ugly elements of Ender's Game comes from the character of Mazer Rackham, hero of the first invasion. Changing some elements of a novel for a visual experience is common and required, however when it comes to Mazer Rackham having facial tattoos I was left speechless. I thumbed through my copy of Ender's Game came up dry with the text character  did not resembling Queequeg from Moby Dick! While the film does directly explain it and uses a title of one of the sequels of Ender's Game, it is still unneeded, along with his accent. Also unneeded is the performance of Sir Ben Kingsley. Normally, he is one of the best actors working in the film industry today, and even in Slipstream he turned in a memorable performance, but not here.


How Does the Movie Compare to the Book? 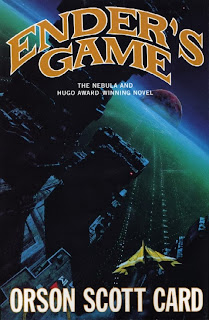 In certain rare examples, movies can be better then original text, take BLADE RUNNER for example, and I wasn't a fan of 1985 novel. For me, the film adaptation of Ender's Game could smooth out the rough and odd portions of the novel. Ender attended the space-based battle-school from age 6 to 12 that is in Earth's orbit, the same location as in the novel, however, in the film spends only one year in the school. Then he is shipped of to Command School at an inter-solar system asteroid. However, in the film changes locations, but does work very well. One of the elements I hated in the book and found unrealistic was Ender's siblings, Peter and Valentine, subplot, and it is completely deleted from the film...thankfully. That is the main difference, the focus of the film over the book. Nothing is mentioned about Ender's family for the most part after he enters Battle-School, along with the political situation back on Earth that took many pages in the book along with the aftermath of victory in the war. The movie is solely locked on the plight of Ender Wiggin and how event unfolded around him, and no one else.

Should You See Ender's Game? 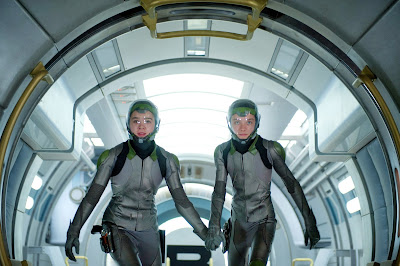 There was little question that I would be seeing Ender's Game, after what good would a blog about military science fiction be without an Ender's Game review, right? I think if you are a fan of sci-fi or the book itslef, than see it, especially in 3D or IMAX. The film does tell the tale of Ender Wiggin, and his progression from child to commander with beautiful visuals and a great performance by Asa Butterfield as Ender. This film does respect the original text, and attempts to bring it to life, not alter it beyond recognition. One of the best elements of the film that will stay with you, is the film;s questions about morality of using children to achieve genocide of Earth's enemy and how different characters treat the subject. This is hammered home, and seen in the broken soul of Ender at the end of the film. However, If you are not much for sci-fi, than I say skip it, there is not much here for you.
Posted by William at 15:33