FWS Topics: The 10 Most Common Themes in Military Sci-Fi 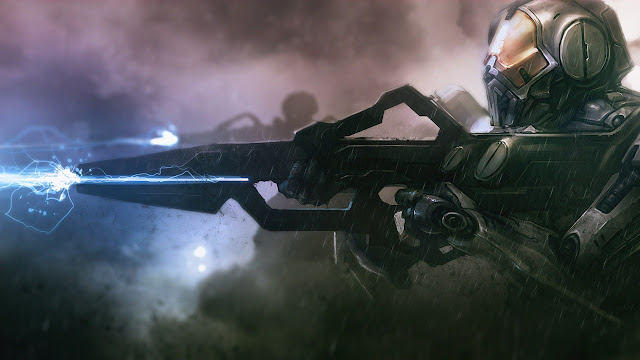 No matter how you try to reinvent the genre that you write in, you cannot escape certain themes that are the bedrock of the genre. Throughout the majority of military science fiction, there exists ten key themes that most or all MSF writers and creators fall into. That is not always a bad thing. for example, Bungie entered into the super-soldier genre in 2001 with the Master Chief in the original HALO game, and set a new and better standard for MSF super-soldiers. Since 2008, I've written books with every one of these themes, even devoting entire novels to one specific type, attempting to explore and redefine. The vast majority of these themes have been covered in-depth on the FWS blog since our founding in 2010, but there are few still still waiting their turn.

Without a doubt, the oldest theme in fictional thought or writing is the concept of the super-soldier. Early man depicted and celebrated the concept of the ultimate hunter, and slew mythical beasts, and monsters of the darkness. Within the fables of mythology, the theme of the great hunter and bold warrior are common, and speak to an intrinsic need in mankind for these types of warfighters. Super-soldiers allow the author/creator to explore the length that humanity will go to win wars. While the circumstance of what fuels the need for super-soldiers varies, along with the methods used to achieve their 'super' status, and who is among ranks of these elite warfighters, they all communicate that long held desire for the ultimate warrior. FWS discusses this topic in-depth back on September 07, 2012

It seems that mecha and powered armor is at the core of most of the foundation works of MSF, and during my childhood, there didn't seem to be an anime without some form of APS or Mecha. These types of futuristic military technology allows for an instant communication to the audience that this is the future. While big-robot mecha MSF anime and mecha is less popular than in the 1980's, powered armor is still going strong. Mecha was covered in-depth by FWS, on August 08, 2012, but the iconic powered armor has not been. That will be corrected for the 3rd anniversary of FWS. Expect a massive blogpost on that one. 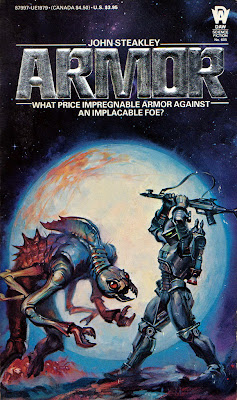 In the founding classic of MSF literature, Starship Troopers, the theme of powered armor infantry verse insect-like hostile aliens was firmly established, and created a theme that will repeated often in future FWS works...including my first novel. This theme really works well within MSF stories. First off, powered armor sets the human soldiers apart from today's military, and makes these soldiers' abilities more superhuman, allowing them to tangle with these bug bastards. Insects creep people out, all human beings have experiences with them, and given that there are more insects than humans, it is easy to imagine them has an aggressive alien foe. Not only were insects popular in 1950's B-movie drive-ins monster fare, but also with the release of ALIEN and ALIENS, there was frightening dark vision of what could be waiting out there for us. It seems that this theme in MSF works is not yet played out, and will continue for years to come. FWS discusses this topic in-depth back on March 17, 2012 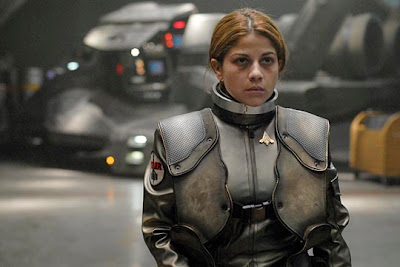 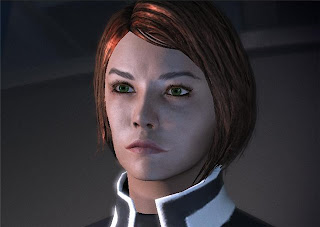 Part of is that female soldiers allow for more character development with romance, emotions, and sex angles, also it sets their fictional military immediately apart for contemporaneity society. Another part could be related to the progress of society as a whole. It is no longer the 1950's, and society is more open to females in all types of roles. I, too, am insanely guilty of using women has main characters in my own MSF writings...hell, I play as the female Shepard on Mass Effect! For me, military female characters offer more room to write and explore the character. FWS will be covering the female soldiers and science fiction sometime in 2013.

For nearly a thousand years, humans have used chemical (hence the name 'firearms') explosions to propel metal projectiles into the flesh of their enemies. About a hundred years ago, the use of light and heat was seen has a replacement for the old bullet, and back 1898, science fiction and directed energy weapons entered into a long partnership with the heat-rays from War of the Worlds. From the era of pulp-sci-fi, to the post-Star War/Star Trek handheld laser blasters. the laser gun has been a hallmark of military science fiction soldiers. While it seemed that this theme would continue forever, especially with the US Navy about to deploy lasers on their surface warships, the bullet has coming back. Since the 1980's, the new MSF theme of 'kinetic weapons are just better' has risen in  popularity, while the laser blaster is seeing a decreased. However, just wait unlit the new Star Wars movies come out. FWS will be covering laser DEW in an upcoming blogpost before the end of 2013 and will be called: Laser-the Killer Light. 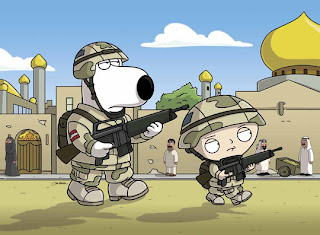 Every single MSF story I've read, watched, or personally written, has this theme embedded into the core of its structure...even in my own stories or MSF stories by military veterans. Mildly military is not always a bad theme in MSF as a whole, because it is necessary evil to move the story along with getting bogged down in the complex nature that is a military organization. Some authors/creators use special forces, or elite military units, or super-soldiers to dislodge their characters from the military bureaucracy. Then there are the works that portrayal the military more like high school and offers characters that would have been drummed out of the service long ago...Anime is especially guilty of that....the Bridge Bunnies from Macross/ROBOTECH anyone? FWS will be covering the Mildly Military theme in MSF at a later humorous blogpost. 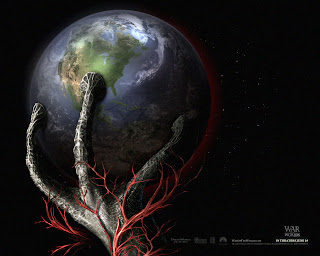 The single longest-running cause of wars in science fiction is alien invasion for domination and possession over Terra. From the 4th century Mahabharata, to the Western literature founding classic of science fiction, H.G. Well's War of the Worlds, all the way today, it seems that all the grey beings from the Zeta Reticuli want our little green-and-blue marble. While the reason vary greatly, from they want our women, to our water, to Strawberry Ice Cream, but primarily, it is because of the rarity of Earth-like planets in the Milky Way. FWS covers this theme in a blogpost on July 13, 2012. 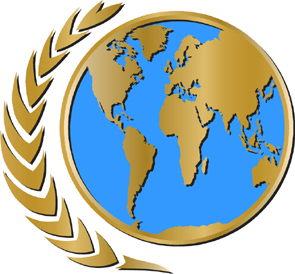 Since the heady days of the League of Nations in 1920, all the way though the United Nations of today, there has been an attempt by Terrans to unite the 100+ nations of the global under a single flag and government (One World Order, anyone?). Yeah..that hasn't happened...but in military science fiction, our brave space marines normally serve some type of unified Terran government. At times, the unification of Earth occurred due an alien threat, nuclear war, or colonizing of the stars. Much like directed energy weaponry, the concept of future soldiers serving an united Terra has lost some popularity...one could blame it on ALIENS. 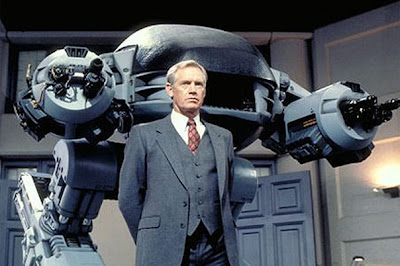 Since the first days of robots in science fiction in 1920 with R.U.R, all the way through today with Black Ops: II, one of their projected roles has been for use as soldiers. Used in fictional works to be either the aggressors (Terminator) or even the hero (ABC Warriors), robotic soldiers often demonstrate the horrors of future wars. At the moment, we are beginning to see the use of robotic warriors in the battlespace with UAVs and UGVs, and there more plans for an expansion of these robotic soldiers.It may be logical for the future of warfighting to be conducted by toasters, especially when considering the question of war among the stars, however, there is the Burnside's Zeroth Law of Space Combat. This important law of sci-fi writing that dictates correctly that an audience connects more to flesh-and-blood warfighters than toasters,  and allows the author/creator to explore the human-side of future conflict. FWS will be devoting a future blogpost on this law of fictional space wars and robot-soldiers later on. 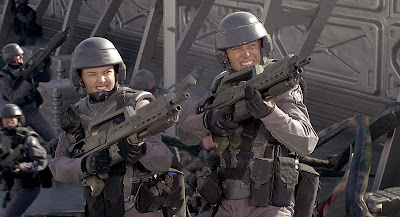 In the era of modern warfare, where tactical air support, armored vehicles, and artillery are critical tools of the warfighter under the umbra of combined arms, the majority of MSF projects that future soldiers will go into battle alone. At times, this is rightly justified by the author/creator outfitting their elite future warriors in powered armor and envisioning them as futuristic world-crushing stormtroopers. Some justify the 'ground troops only rule' due to transporting tanks, planes, and heavy equipment being a bitch to haul across light-years. Most of the time, it seems that the 'ground troops only' rule is because the author/creator didn't bother to think hard enough on the topic of future war...or bothered to read my blog. FWS will be covering the 'ground troops only' rule in a later blogpost.