FWS News Feed: Trailers for the CG Harlock Movie and After Earth!

In 2010, Toei Animation announced that they would be making a big-budget CG Captain Harlock film, and people like me, who grew up this space pirate wondered if this would be an successful OVA of Harlock and company. With the success of the live-action Space Battleship Yamato, Toei moved forward with the CG Harlock film, and now we finally have a second, longer trailer!

Here is the new Second Trailer: 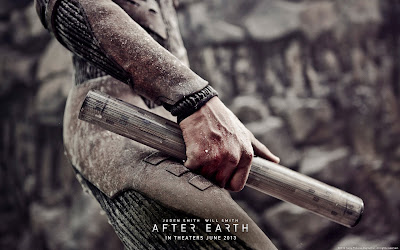 Somehow, I've been amiss about posting about this upcoming MSF film starring Will Smith and his son, which has tones and the look of Tom Cruise's Oblivion. After Earth is about a father and son trapped on Earth after their military spacecraft crashlands on the abandoned world. One thousand years prior to the film, mankind is forced to abandon their homeworld, and resettle on Nova Prime many light-years away. Now, father and son Rangers most survive the horrors of wild Earth and get off the rock back home. The original story was created by Will Smith while watching I Shouldn't Be Alive. From the film's website, there were six colony starships that left Earth for Nova Prime, with only 750,000 colonies, leaving behind billions on the toxic Earth to die. This could be really a great sci-fi film, if the end lives up to the setup.