In preparation for a blogpost about the realities of hard science space fighters, I thought I would make a list of my favorite space fighters, before hard science kills the idea for me entirely. If you grew up in the 1980's, and were a fan of sci-fi, than you could not help but be overwhelmed with space fighters, since Lucas made them the critical item for science fiction.
BTW: these are in no order of favor.

Ranger Interceptor from the Adventures of the Galaxy Rangers 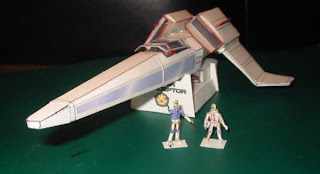 I grew up watching this show, and I count myself lucky to have seen the series, but it was something special and unique  especially considered that there was another western sci-fi series on at the same time (Bravestarr). During the limited run of this American animation series, the Galaxy Rangers  deployed via two main space vehicles, one was a shuttle, the other was this badass fighter, with a tri-engine layout, and this was the only good imagine I could find. Man, I must half built a dozen of these out of Legos....memories. This paper model is the work of Bill Perry and If you like the image, please follow this link:
http://www.ecardmodels.com/index.php/sci-fi/ships/ranger-interceptor.html

A -Wing The Return of the Jedi 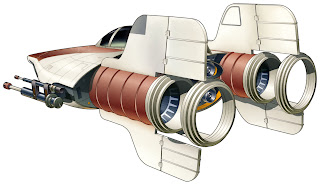 While I had the original 1983 A-Wing fighter toy, and it was awesome, I never warmed up to it like the X-wing, Y-Wing, or even the ugly-duckling B-Wing. Compared to these rock stars, the A-Wing gets lost, and it was not until I played the X-Wing computer game that I developed a love for this hotrod. The steer speed coupled with concussion missiles made quick work of TIE fighters. Plus, it could out running Star Destroyers in sub-light.

Gunstar from the The Last Starfigther 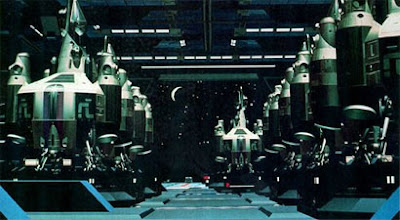 1984 was a great year for films, but the one I looked forward to the most was The Last Starfighter. The plot really appealed to my six year self, where a simple kid from a small town played a video game so well that alien recruited him for their space force as the gunner on the Gunstar, pride of the Rylan Star League. While the Gunstar was a great design, the thing that caught by eyes was not just its beauty, but the way that the gunner controlled the weapons. Because the Gunstar was designed to counter more than one target at a time, the Gunstar's gunner was seated an multi-axis chair that allowed for free-range targeting, which seems more logically than other star fighters on this list.
Here is a good website on the Gunstar:
http://www.kitsune.addr.com/SF-Conversions/Rifts-Other-Vehicles/Last_Starfighter_Gunstar_Starfighter.htm

SA-47 'Hammerhead' from Space: Above and Beyond 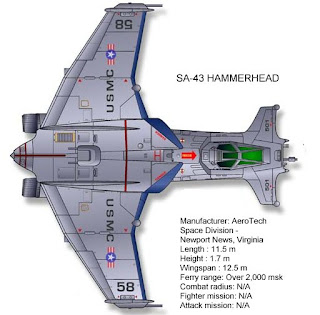 The SA-47 Hammerhead was the primary endo/exo atmospheric attack He3 jet of the US and most United Earth forces committed to the Chig War. The Hammerhead was actually stored onboard ship in two different pieces, and only mated during launch. The series never stated the reason why the Helium3 loaded propulsion base was secured below decks, while the cockpit was bring up inside the carrier, added a nice dash of realism. The series made the most of the figther, not only did it engage hostiles with both missiles, lasers, and Gauss cannons, the Hammerhead was unilizted for close air-support and deploying spy satellites. 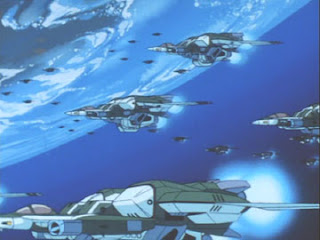 There is something about the ability of the REF Alpha fighter to connect with the Beta to forge a more powerful package that applied to me has a child. Even now when I watched the 3rd ROBOTECH generation, I enjoy watching the Alpha/beta dose out the lethal missiles on the Invid. Been waiting to save for a ROBOTECH masterpiece Alpha/Beta in blue of course.


SKULL-ONE from ROBOTECH: The Macross Saga

Being a huge ROBOTECH fan I love the Veritech, there is something so correct about the way the Macross veritechs appear, they are futuristic but still tied to the F14 Tomcat, making this a nice bridge between now and the future. But the best of the best was Roy Fokker's SKULL-ONE. I still can remember that first time I saw SKULL-ONE in 1985 and connected it to the F-14s that were in the 1980 film the Final Countdown. 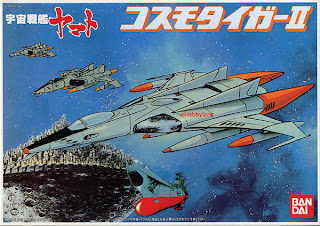 Much like ROBOTECH, Starblazers was filled with all manner of space fighters, but it was not until the war with the comet empire that the second generation Cosmo-Tiger appeared that this series got a truly beautiful Earth fighter. This is one of my aero-fighters from any Anime work, especially since the Cosmo-Tiger did not transform...which was very standard at this time. I would post the fighter from the Harlock universe, but it and the Cosmo-Tiger at too similar


B-Wing from Star Wars Return of the Jedi 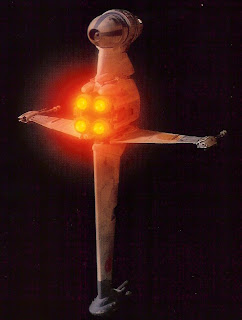 When I sold off my Star Wars collect, the two items I got the most money for were the Imperial shuttle and the B-Wing, and the dealer told me that the B-Wing was a rare toy, must people couldn't make much out of the design. There was something so odd, but yet striking about the design of this star fighter that caused me to notice it in the toy store in 1983. later, I gained added respect for this ugly duckling when I played the B-Wing expansion pack for the Lucas Art's X-Wing and saw the pain this thing could dish out.

The Earth Starfighter from Buck Rogers in the 25th century

While the 1979-1981 Buck Rogers TV series was cheesy, too ligthhearted for its own good, some reason, it got one of better TV space fighters designs. Unlike the Viper from BSG or the space fighters from Star Wars, the Buck Rogers space fighter was more of a set piece and it seems little was developed on the technical specifics of the fighter. Still, it was beautiful.
The Viper Mk. II from Battlestar Galactica 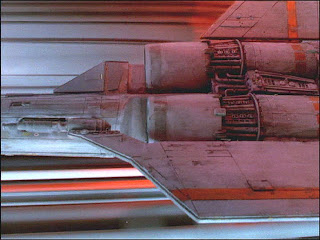 Next to the X-Wing, the Viper from the classic BSG series was an iconic space fighter that created legions of fans of the this design. I knew people that hated the original Galactica but loved the Viper. I was pleased to see the Ronald Moore new series not only kept the Viper but modernized the design and forging the Viper into a more realistic space fighter.
This was a fighter I built many times out of Legos, and used to regard as my favorite space fighter.