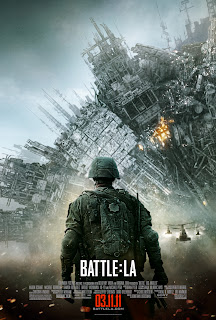 Battle of Los Angeles is a 2011 major studio military science fiction/alien invasion movie set in contemporary America, that tells the invasion of LA by hostile alien forces from the POV of a US Marine Corps unit, as they battle to prevent the aliens' from establishing a beachhead. The film was generally well received, and made a decent amount of money in its theatrical run, despite not being in 3-D (like everything frakking least these days!). The genesis of the film as been said linked to the rumor shootdown of an UFO over Los Angeles in February of 1942, and Youtube videos of Marines fighting in Fallujah. The overall style was summed up its led star, Aaron Eckhart: "The goal was: this is a war movie, a documentary style war movie—with aliens in it."
The DVD was released on Tuesday, June 14, and I rushed out to buy since I missed in the theaters...and after seen it at home, I wish I had made more of an effort.

One of the most common themes in science fiction is the invasion of Earth from outer space, including one of the founding classics of sci-fi literature in general: War of the Worlds. Most of these are done very badly, and unlike 99.99% of all sci-fi alien invasion movies, this one hits on all cylinders, with the right amount of  action, heart, and dialog.The Marines in the film are played in a realistic manner, with Aaron Eckhart putting a good performance as their commander that is haunted by his past actions. Adding to this realism is the simply amazing job done with the alien design, behavior, and their military tactics. In most alien invasion films, the enemy invasion force is not shown engaging in brutal infantry combat, mostly, in these other films, they use tripods or fighters to destroy Earth's defences.
Not in Battle: Los Angeles, these alien invaders go head-to-head with human soldiers in the streets, then after they establish a beachhead, they deploy heavier forces. Another fine point that this movie makes over other alien invasion films, is that often human weapons do not phase the alien on their path of destruction, however, in Battle: Los Angeles, the enemy can be killed.

This concept, coupled with the aliens' own kinetic-based weaponry allows for the combat scenes to be much more engaging due to their similarity to reality, increasing the air of tension, than if they were super-troopers with rayguns, and in some ways enhanced the overall emotional feel of the film. In terms of the impact of the film, it is very similar to my fitst time experiences of seeing Blackhawk Down and War of the Worlds (2005), where you become caught up the visceral action, the hard-hitting emotions, and the tapping into those feelings of September 11th.  I read a few reviews critical of the filmmarkers' choice to pay attention to one small Marine unit the massive defensive action to prevent deeper alien penetration into LA. I, for one, am grateful for the attention to one unit. If the film jumped from one group to another (like Blackhawk Down), the action would lessened, and confused the audience during the chaotic street-battles. The element these critics missed about Battle: Los Angeles is the balance in the film, violent street battles are contrasted with soldiers turning to take care of one another and civilians, news reports, and epic visual scenes of alien military units marching in the ruins of LA. Bottom line,  Battle: Los Angeles is THE alien invasion film we have been waiting on...

Like most movies, Battle: Los Angeles is made to have that special initial experience, where the emotions of the viewer of raw and intense from the madness unfolding on-screen, my hope is that Battle: Los Angeles is like Blackhawk Down, worthy of repeat views, my fear is that flaws in the film will become more apparent with many viewings. The only real flaw of Battle: Los Angeles, is that it was made to have the "shock and awe" effect, and some elements of logic are paved over to make the story flow...like the Marines having massive amounts of C4, and that the alien troopers become easier to kill, just because they discovered the location of their heart. I am also, convinced that the scene at the end of the film, where the Marines use a laser designator to guide Copperhead missiles into the enemy, maybe incorrect...have to watch it again.
The UGLY

The only ugly part of Battle: Los Angeles is that it did not get the credit it deserves...this movie did things that other films were unable or unwilling to do...showing the grim reality of alien invasion. The negative reviews of the film often took issue with it being centered around loud street battles and being closely patterned after Blackhawk Down. I actually think that these are the strengths of the picture, being centered on a great modern war movie and being honest about the reality of warfare.

By the Lords of Kobol, YES! This is a rare gem of alien invasion sci-fi films, that combines hard-hitting, realistic war movie in current times with believably aliens that response realistically to the Marines and their battle tactics. Do yourself a favor, watch and experience the chaotic beauty of Battle: Los Angeles!
Posted by William at 18:51