FWS Book Review: All You Need is Kill by Hiroshi Sakurazaka 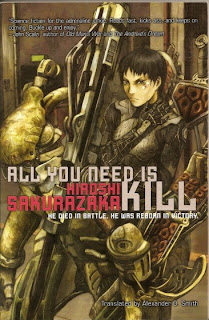 All You Need is Kill is a 2004 Japanese light novel (text and some pictures) written by Hiroshi Sakurazaka that was later translated into English by Alexander O. Smith for Viz Media in 2009. The book is available in two formats here in America, one is the original light novel, and the other (the one I own) is void of any illustrations.
The book centers around Japanese united defense force APS (called Jackets) virgin pilot Keiji Kiriya and American Special Forces Jacket pilot Rita 'Full Metal Bitch' Vrataski during the defense of the Japanese mainland against waterborne alien invaders called 'Mimics'. Keiji is killed in his first battle with the Mimics, but wakes up each day in his bed back at their base, on the eve of battle, destined to repeat each day over and over. Over the 158 times, Keiji, much like Bill Murray from Groundhog Day, attempts to escape the time loop web, only to bounced back to the same day. Then it finally ends, when he and Rita team up. I originally came across this book in 2009 when Viz Media published it in English during research on armored power suits. I recently spied the novel at the Barnes and Noble bookstore on University drive in Fort Worth, and snapped it up quick a few months ago. 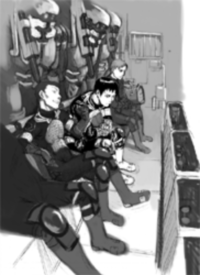 As I've bitched before on FWS, about how good APS war novels are hard to find, that is one of the reason I wrote my own. I was very impressed with the skill of Sakurazaka to communicate all of the elements in this book in less than 200 pages, along with brutal battle-scenes that reveal anything in Armor or Old Man's War. The mecha design of the more Class-One APS are solid, with cool, possible weapons that had me worried with similarities to my own novel, and the author uses them well, drawing out every bit of energy in those battles scenes.
Adding to the praise of the author is the orginality of the Mimic aliens and the Jacket APS units. I was also sold on the whole time loop idea, and the way that Kiji responses, balancing madness and boredom. Much like me, Sakaurazaka fills his characters with the real world, where characters think of food, sex, their hobbies, even during times of war, creating a real-world atmosphere. This all translated into All You Need Is Kill being an enjoyable, easy, MSF read, and one of the more successful APS themed novels ever written. 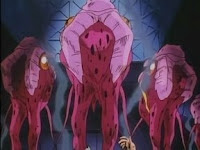 As much as I believed in the original concept for the time loop that trapped Keiji and Rita, the last fifteen pages begin to take on the smell of bad sushi when Hiroshi begins to extend the concept, and I then knew a bad ending was coming my way...and then it happened. Frankly, I hated the end of the novel with  it's odd dreamy, loose end that is coming place in modern films and novels, more over, it resolves nothing with the Earth-Mimic War, or the fate of Keiji. 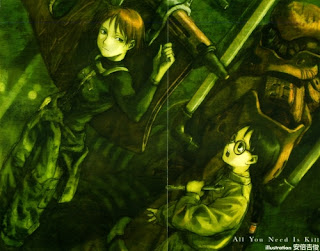 Several of the images on this blogpost are taken from the light novel version, and are one of the rare missteps in All You Need Is Kill. They are nothing more than typical anime/manga super-deformed styled characters that possess little in common with the source text. When I googled these images, I was grateful that I owned the text-only copy. Given the seriousness of the text there should have been art closer to reality, similar what was done for Jin-Roh: Wolf Brigade.

Should Read All You Need Is Kill? If you are searching for a good, quick reading MSF novel with good combat scenes, and some original concepts, than All You Need Is Kill is for you. This is one of better MSF novels out there, it was both light, easy to slip into, and complex at the same, like a good piece of sushi or pint of beer (yeah, I doing both while reading this!). I would also recommend reading the novel before Hollywood alters the novel and piasters Tom Cruise's face over the original art work...or worse, prints a book based on the movie and not the original source material.


The All You Need Is Kill Movie 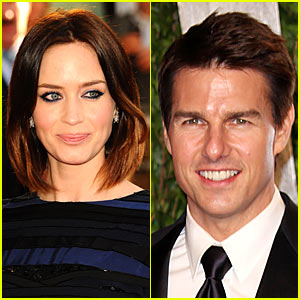 I may object to Tom Cruise's paltry religious beliefs, but he does have a nose for good projects and attaching talent to those projects (just not Knight and Day). He also has a proven sci-fi track record, Minority Report and War of the Worlds are some of the best science fiction films made recently, which makes senses...his religion was created by a failed science fiction author. Anyway, All You Need Is Kill will be directed by Doug Liman, and co-starring the beautiful Emily Blunt as Rita, and undergo a name change to We Mortals All. If this does get made, along with the Jackets, than between this and Ridley Scott's The Forever War, military science fiction could have a banner couple of years.