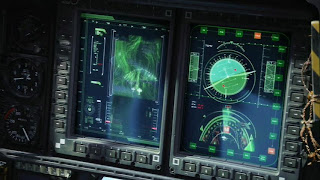 FOB Shin was abuzz with all manner of activity, every spare soldier and hopper was pulled off duty, and brought back to the barn. Sandoval was working through his painfully hangover while loading down the cargo section of a massive heavy-lift Babar hopper, while he loaded, he did throw a spying eye towards Maya. She noticed, and produced a smirk, “you’d get more done, if you paid attention to your boxes, Earther.”


“What is all this stuff anyways?” Sandoval quickly changed the subject before his noticed his head face.


“For the big operation, and no, “she said before he asked, “I don’t know what the mission is, we’re going to be briefed in the air.” He nodded, but he didn’t like it, but there was little to like on Abaddon. After the loading was completed, Sandoval was herded down to don his armor and prime his trusty Steyr-Phoenix carbine. He then noticed that those two odd guys from Britain weren’t playing cards and smoking. That left Sandoval unsettled, but the heaviness of the armor made him feel secure and safe, despite what he had seen. It wasn’t much later until the skies around the forward operating base were filled with the insect profiles of an aerial flotilla.
Hundreds of miles away, in the depths of the Sync encampment on this continent, loading of combat air vehicles was beginning as well. Vadher closed his heavy eyes, and transported himself back a few years, when his children played in the lush parks of Mariposa colony, and his wife wore that white dress. Tears ran down his face, as he moved into position inside the lander. Now, he was a pawn for the Sync. It was bad enough that his colony lost the war, that everyone Vadher had known was transformed, but the final humility was that they had to fight to expand their empire, gathering more human worlds under their banner. Vadher never did it but willingly, not that it mattered.

He entered the lander, packed in with those fellow Sync warriors; they were bound for the last linchpin in the colonial defense ring, Forward Operating Base Shin. He and the rest of the warrior-forms obeyed the impulses of the Sync hive-mind without question or a moment of desertion. An hour later, Vadher felt the first jarring impact of AAA flank, ringing in the metallic belly of his lander.

Shin was swarmed with Sync landers, impacts the air was packed with machines, impact explosions from what was left of Shin’s kinetic and Phoenix Labs heavy laser cannons. The Sync attack had been overwhelming, taxing the interceptors to their limits, forcing the General to send people out on the flattop deck with shoulder launched anti-air rockets. It was a messy defense, and any hoppers left on the tarmac were shot down before takeoff, mixing raging fireballs with the general hell breaking out. Shin’s defenders, from soldier to cook, emptied every rack of any kind of gun, and most were thinking of saving the last round for themselves.

COM-VR-NET was flooded with overlapping signals, interrupting the feed from the taskforce. Ray shook his head. “Something is going on back there, Erin.”

“Punch a clear signal to Operations, Ray, I wanna know.”For a few minutes, Ray used his skill to navigate the mess, until he was able to hack into the security camera stream feeds. He swallowed hard, and shipped it over to Hawksworth’s HUD. She said nothing, as she changed course.

“Are the rest following us, Ray?”


“Yes Ma’am.”
“Good, get me through to the general.” Once again, Ray worked to open a live signal to the man in charge.

“Got one, but its spotty, make it quick.” 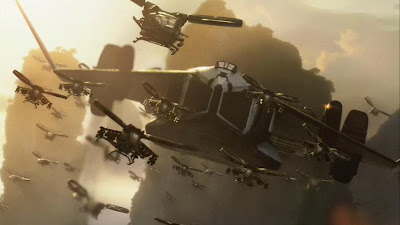 “Belay that 1-1!” The General screamed over the shouting. “Go to the RV! Do not aid the FOB!”
“Fuck that, Shin! We’re coming in!’ Hawksworth clicked over to the offensive weapons package, while Ray geared up the hopper for combat. “This is Hawksworth,” she said over the WIDECOM to the troops in the back, “Shin got jumped, we’re going in hot, prep for combat drop.” Every Steyr-Phoenix DEW was switched on, and the packs were dumped off of the armor. Sandoval observed Maya checking her tomahawk’s placement. The Hopper banked hard, Erin pushed down hard on the A/G field, and ramped the small thruster package to full burn, the shockwave of vibration echoed in Sandoval’s armor, and his stomach mimicked the rolling action of the armed vehicle.

Maya turned to Sandoval and despite the helmet, he could see the softness in her eyes, he turned the favor, and touched the engraved words on the doorway. The light transferred from red to green, he uninstinctively tossed himself out of the vehicles, straight down into the middle of a an dizzying firefight.

The moment his armored feet hit the tarmac, he was moving, pulsing his ALC-3 laser carbine with 5kj shots, firing was his only cover, along the bodies of both species. Within a minute, he watched half of his jump-platoon be cut down with Sync supraheated kinetic spikes. When the man next to him exploded in a bloody shower of gore, Sandoval’s Courage pump kicked into overdrive, spawning him to flip over to the heavier 40kj anti-personnel DEW pulses. He saw a Sync running with its blades out towards a rocket team; he trained his barrel, and squeezed the hand-trigger.

The laser hit Vadher square in the crest, layers of bio-armor cooked off in ablative effect. Sensing the damage, he darted to the left, preventing the pulse HEL beams could settle again, striking back with a long burst from his projectile weapon. There was so much confusion, smoke, and beams buzzing around; his alien HUD systems was jammed up attempting to track his targets.

Another beam blazed on his alien back, Vadher turned again, taking another in the thigh. He screamed out as the heat scoured down to the layers to his real leg, sending alarms blaring; Vadher stumbled as the bio-armor died. With a mad hope, the human Sync soldier raked the landing pad with hot spikes, catching a few colonials, but they returned fire with their Steyr-Phoenix MILSPEC laser rifles, peeling off more layers. He didn’t scream this time, he knew it was all over, and a sense of relief rolled over his wounded body at finally being discharged from his traitorous service to the enemy.

In his finally seconds of life, Vadner, the colonist form Mariposa, fell to his knees, due to the bio-armor artificial muscles failing. In those last heartbeats of life, he thought only of his wife and children playing in the park…he wept as Maya Aroyo used her tomahawk to behead him. She raised the bloody head in victory, and despite it being clearly human, her fellow soldiers cheered her gruesome trophy. Kicking the remains of the alien warrior body savagely off of the edge of the VTOL pad, Maya watched as it falling hundreds of meters below. It was a fitting burial, she thought as a grim smiled across her face, for a race traitor.

Once the bodies were collected, and the names entered into the computer database, and that day, Sandoval lost more than half of Meatgrinder. Hawksworth was being dressed down by the General, and then thanked with some hot Sake. The operation to attack the Sync base-of-operation was on hold, until they could pull together. Forward operating base Shin was rattled, but the drinks flowed that Night. During the height of drinks, Maya took Sandoval’s hand, and she led him by the hand down into the bowels of Shin, touching, despite the armor. Once they were safety hidden, the armor was removed piece-by-piece, there was no words, there didn’t need to be. For the next hour, the war, and their ghosts that haunted this world were, for the first, not factor. Maya and Sandoval worlds reduced down to the tow of them. After, as they laid together in a warm bliss, Sandoval lit a rare cigarette, touching her lightly, has he puffed away, thinking of the green fields of Elysium. He openly wondered and hoped for Maya to be there.
Posted by William at 21:07