A man wrongly convicted of conspiracy to commit espionage against the U.S. is offered his freedom if he can rescue the president's daughter from an outer space prison taken over by violent inmates.

It seems in the 2070s, we warehouse our most dangerous convicts in orbit, and that somehow, the president's daughter just happens to be up there during the prisoners breakout, sound familiar to anyone? That is the thing about Lockout, it is a completely recycled plot, from Guy Pearce's disavowed ex-military character, Snow, to the entire setup of the prison. This movie should have been called Escape From Space, and Guy Pearce should be replaced by Kurt Russell redonning the eye patch of Snake Plissken. Of course, there was the proposed John Carpenter's Escape From the Earth, and this might be the closest we see to that cancelled project.
What might make Lockout good is that Guy Pearce is a gifted actor, the SFX looks solid, the crazy convicts might gave an Escape from Butcher Bay atmosphere to the film, and one of the productors is none other than Luc Besson.

More information on the Space Jockeys from Prometheus! 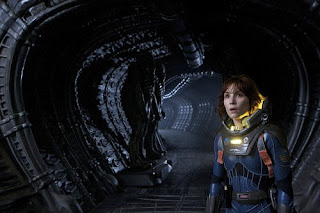 People seem to forgot that in the ALIENS universe, there is another alien species besides the xenomorphs and Predators, and from this imagine, it seems that we are finally going to receive some clarity on the mysterious Space Jockey race. For me, the Space Jockey (AKA: the Mala'kak or "universal pilot" in Latin, Mundus gubemavi) was one of the best parts of the original 1979 masterpiece, and it now in 2012, Mr. Scott is giving us some answers. It seems that originally, the Space Jockey was transporting the aliens to be used as a bio-weapon, much what Weyland-Yutani wanted to do, and that the horseshoe ship was a "carrier" or "battle-wagon" vehicle. Another element that the imagine from Prometheus is telling us, is that the Space Jockeys wear some sort of enviormental suits, and may not be elephant-like at all! FWS is badly looking forward to seeing Prometheus in 3D IMAX glory...now to wait until summer. 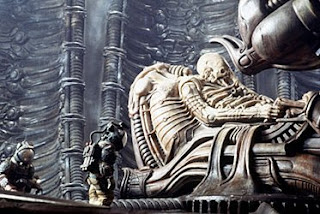