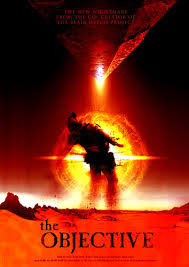 The Objective is a 2008 science-fiction/action/thriller/horror direct-to-DVD movie directed by Daniel Myrick of Blair Witch fame, and takes place in Afghanistan in October of 2001, just  as US Special Forces, and CIA SAD teams are readying for the full-scale invasion. The film starts off as CIA officer, Keynes, arrives to brief Army Special Forces ODA-329 on a mission to make contact with a Cleric that is a major spiritual leader in A-stan, however, Keynes is keeping the real mission a secret. Over 90 minutes, the Objective tells a story of jinn, the harsh, unforgiving terrain of this country, and survival. I became aware of this unknown movie in 2010 while googling UFOs in Afghanistan...and I have to say, a most impressive movie. 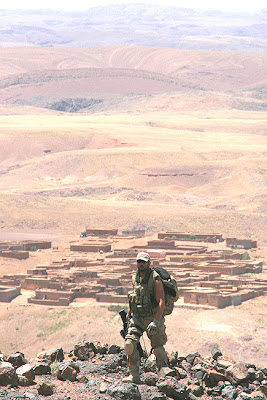 It was within the first few minutes of the Objective, that I realized that this film was going to live up to the hype I had read online. It was with the opening briefing scene, that I saw the way that filmmakers and the actors (some former Special Forces and military) treated the realm of Special Forces in A-stan, making it one of the most realistic I have seen. Then there was the harsh, nearly-alien, unforgiving terrain of Morocco that seemed to be a character in of itself, making the film's look unique. Adding to this tone of realism was the manner that the cagey CIA officer and the ODA behavior in the field and with one another added to the slow boil mood of the film.
However, the best praise of the Objective was the ability for cast and crew to build several stories, including a brutal tale of survival, into its central theme of soldiers coming into contact with an Vimana, and not treating this topic like a Sci-Fi Channel movie-of-the-week. Often, movies that attempt to mix genres, fail all of them, and weaken the central story, the Objective is a film that mixes elements of horror, action, mystery, and a thriller, and is able to find a balance, and hold the central story intact. That central story, is told in such a way, that it seems believable that the CIA would direct an ODA team to make contact with these alien heat signatures, and director Daniel Myrick adds layers, then peels them away slowly adding to the creepy, tense factor without resorting to tired horror-plot devices. I found, despite my many years of study on ancient astronauts/UFOs, I was completely hooked on the film, and the way that these UFO were presented (and the SFX) was all-out brilliant. Overall, I found the movie gripping, creepy, compelling, and well-done. 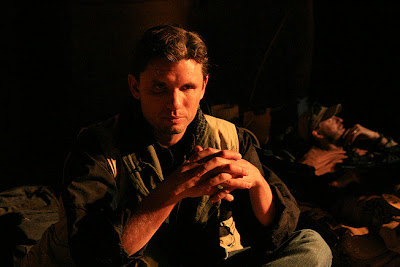 Of course, the Objective being a low-funded ($8 million dollars) B-movie that involves aliens, you're going to get some elements that simply do not work, but not the ones you think.  In the film, the US military using UH-1 "Huey" helicopters instead of UH-60 Blackhawks, the lack of explanation for one of the members of US ODA team being from Australia, and then there is the end of the film. The amount of work and development that was put into the Objective seem to break down at the last few seconds of the film, and was a little too X-Files for my taste, now I liked the X-Files...the Objective worked too hard to end on such a note. 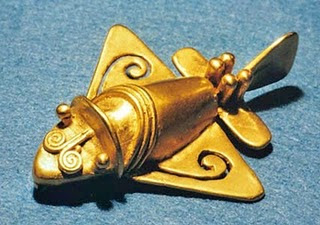 The ugly of this film is the shame of a brilliant little film like the Objective that they get lost in the used DVD bins of the world, and it takes word-of-mouth or positive Internet reviews to get the movie dusted off...The other ugly element, is a small metallic gold-coloured plane that Keynes finds in the cleric's home, and if one reads into the film, this plane-like object is supposed to be a human-created representation of the Vimamas they see about the forbidden mountains. However, this small golden plane is not correct for Vimana mythology, which are presented in the ancient Hindu text (and the film). Instead, these small golden delta-winged planes are more correct for ancient astronaut theory in the Pre-Colombian America culture of Chimu.

Should you buy/rent the Objective? 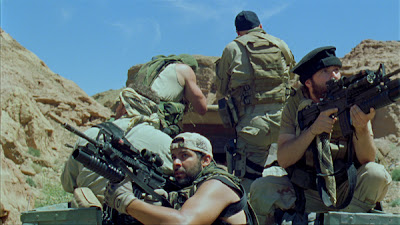 Don't let the main plot point of a ODA team on CIA directed mission to make contact with some sort of alien intelligence throw you, without a doubt, this little film was a B-movie gem that really deliveries the goods. Much like my other favorite B-movies, Slipstream (1989). The Outpost (2008), Dog Soldiers (2002), the movie as a lot of heart, backed up with a great story, and filmmarkers making the most of their monetary limitations. I very much enjoyed the Objective, and was worth the time and effort I invested in finding a copy...which I paid only six bucks for.

Trivia from The Objective 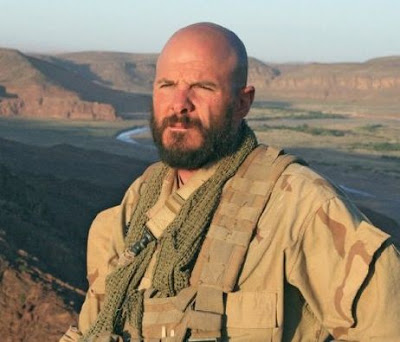 -The actor Matthew R. Anderson (see left)  plays CWO Hammer, commander of ODA-329 is a former member of the Green Berets, who served in a ODA during the First Gulf War

-At several points in the film, there are historical references, one about Alexander the Great seeing "flaming shields" while in Afghanistan and the lost 44th British Regiment during the First Anglo-Afghan War, all were correct historical references. Good point for this action/horror flick.

-Around February of 2011, there were rumors running around the Internet that US Special Forces lost eight men recovering a 5,000 year old Vimana in a time-well, causing world leaders to rush to the site. It was odd that this film and the rumor were similar...hmmm...

-Throughout the film, the ODA team comes under fire from ghosts, and the reference are made to "jinn." Supernatural beings called Djinn or Jinn or Ifrit are commonly found in folk tales from the Arab world, the Koran, and certain translations of the Bible.