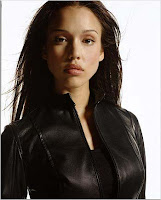 1. Max Guevara from Dark Angel. Okay, it's Jessica Alba kicking arse, driving a motorcycle in a dystopia America....how could you not love that?! 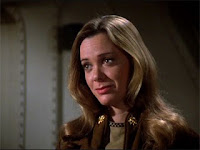 2. Sheba from the Original Battlestar Galactica. I watched BSG-TOS throughout most of my life, and Sheba was one of my favorites. She was an ace Viper pilot, daughter of living legend Commander Cain, and had this way about her. Despite the new BSG being epic in every way of the word....there is no female character like Sheba.... 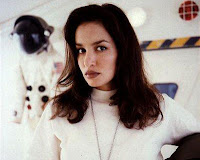 3. Captain Shane Vansen from Space:Above and Beyond. One of the best female roles in sci-fi, tough, did not need to wear tigh clothing to gain attention, and a skilled commander. The character of Shane Vansen is a simple joy to watch in SAAB, she balances the toughness with a softer side that comes out when needed, plus she had an old-Hollywood beauty to her. Shame about the series ending after one season...crime against humanity if you ask me. 4. Leela from Doctor Who. One again...a tough chick with knife skills and beauty, plus she worn those great outfits. When I watched the Tom Baker years of Doctor Who, the chemistry between them made for even the cheap sets and SFX very watchable. The other element, was her child-like wonder at the worlds that the Doctor showed her, coupled with her savage killer. Oh, and she's hot with a British accent... 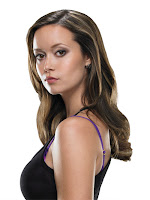 5. Cameron from Terminator: the Sarah Conner Chronicles and River from Firefly. Summer Glau made for both of these characters to be unique, child-like and powerful all at the same time. The manic behavior of River made for a character that you wondered about, while Cameron was always a mystery...Summer Glau might be the new first lady of sci-fi....

6. Nova Forrester from Starblazers (AKA Space Cruiser Yamato). Nova was one of the first sci-fi ladies in my heart, and she was heart of the Argo/Yamato, and often helped the crew with homesickness, along with fulfilling many roles onboard ship.

7. Colonel Wilma Deering. Ah....Wilma Deering...wow....another holdout from my early days as a geek watching sci-fi. I watched Buck Rogers, but tough-chick Deering was the heart of the show. Quick with the smart comeback, karate chop, laser pistol, and star-fighter, she was all things. The show should have been about her! 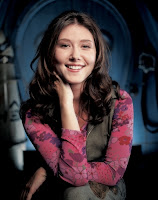 8. Kaylee Frye from Firefly. Kaylee was my favorite character from that wonderful series, and she seemed more real and honest than most women in sci-fi shows.

9. Priss from the Bubblegum Crisis. Punk-techo-rock by night...and one member of the Knight Sabers by even-later night. Priss (named for the Blade Runner character) was a character that loved her machines, and tried to do the right thing, but her temper often got the better of her., and she had a smart mouth. What's not to love?

10. Lisa Hayes-From the Robotech Sega. In 1985-1987, I was obsessed with Robotech, and while Rick Hunter's heart was split between Ms.Hayes and Lynn Minmay, mine was clear-Lisa Hayes was the only choice. Lisa Hayes was one of the more developed female characters in the early anime brought to the USA, and her strong in command style always seemed to save the day. Later, when she was in charge of the REF mission, she really shined.