"In case of galactic emergency: break glass for SPARTAN"

This is my idea for the storyline for HALO:4...hope you enjoy 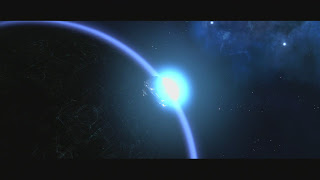 There, in the deep darkness of space, it hung like a child’s building block. The sleek organic profile of the Sangheili Imperial warship Blood of our Sons loomed behind it.
“Success, shipmaster! I've have located it!” The young unproven Sangheili male let his voice express the joy when it came on the scanners.

“Yes, Shipmaster.” The great vessel stopped and illumined the olive drab hunk of metal with its forward lights.

“Confirm the identity of it, Vash.” The older female doctor said to the young warrior. She thought it strangle custom of their new allies, that male warriors had to prove themselves in battle before being allowed to don the trademark armor of his people.

Good thing, we didn’t do that with the SPARTANS… She thought as Vash ran the scan.

“It is conformed, doctor,” his split mouth spoke to the human, “it is the lower section of the human warship Forward onto Dawn.”

“Is he there, scout?” Thel 'Vadam came over to the bank of screens, the many lights projected onto his ancient armor. The doctor marveled at its design.

“Yes, Arbiter, he is there.” That is just what everyone that had search of the last year had waited to hear…that John was there…and maybe even a certain AI.

“Low, Spartan,” Vash did not look at the feared human warrior, “but that is to be expected with a body in status. The doctor moved over to the SPARTAN.

“Ready your boarding team, Jai.” She spoke to the imposing figure before her. “Make sure the techs have their suits ready, the sections doesn’t seem to have any power.” He nodded and moved towards the door.

“Arbiter,” Asked the doctor, “are you coming?”

The shipmaster nodded to the honored warrior of his people, “I own him a great debt, Dr. Halsey.”

A lone Pelican burned out of the Blood of our Sons main shuttle bay, and towards the remaining piece of the frigate. As Dr. Halsey suited up, she was checked off by one of the techs, she turned to task to take her mind off the feelings that welled up over visiting her daughter’s old ship.

“30 seconds, Ma’am.” Said the pilot. She turned to the porthole, to see the remains of the steered off drive section. It was luck, which John had a lot of, that they escaped the explosion, and this one section had some cryo-pods.

“Now, if only Cortana was still functioning.” Catherine said to no one.

The Pelican extended its ramp into the maze of corridors, and the team moved under thruster packs into the zero-gee environment. The power signature of the cryo-pod led them right to the sleeping warrior through the blacked and shattered remains of the warship. As Halsey use the handgrips to guide herself, she thought of Miranda. The techs examined the pod, and gave Halsey thumbs up, while she tried to get the AI back to life.

“What have you found, doctor?” Said Vash over the comm-link.

“Tell your master, that the Chief is alive and we are trying to reboot Cortana.” She tied in her computer terminal and pawed away at the keys, in the code of the familiar AI was hints of rampancy. With a fresh injection of code and some ‘creative’ thinking, she activated Cortana.

The hallway filled with the blue glow of the AI’s female shape, and there she was, formed in a yoga-like pose. She slowly opened her eyes to the boarding party. When gazed upon Dr. Halsey, she smiled.

“Confirmed,” Cortana touched her head then turned to the chief still encased in the cold.

“Status?” Catherine tapped on the computer.

“All green, doctor,” she pointed her arm swimming in code, “want me to crack the case?”

“Yes, Cortana, you both are needed again.” With a nod, the female AI began the process of awaking SPARTAN-117 from his extended rest.

Within fifteen minutes, the pod was opened, and the great warrior of humanity shook his head and focused on the group before him.

“Medic,” Dr. Halsey snapped her fingers in the airless corridor “ran the diagnosis on the Chief, while the tech gives the suit a one over.” The newly awakened SPARTAN-II was descended on by two space suited humans. They hooked into the MJOLNIR armor’s data ports and started tapping away.

“The Chief is healed, some electrolyte imbalance, but nothing too serve.”

“Skip the overhaul,”Fred-104 said proudly to the Chief. “We’ve brought along the new Mark-VI armor.” Losing time in the cold grip of cryo was nothing new to experienced military personnel, but gulf being his old world and his new reality was measured in years…John-117 didn’t have a personal life or even family, but the sense of disconnection left him shaken for a moment.

His entire SPARTAN-II ‘family’ had paid dearly for the end of the long war, now it looked like there were still members fighting for the future of humanity, and he was needed again. That was enough for the old warrior.. Cortana looked at the featureless visor of the chief, and snapped him back to reality.

“What’s the OP, Doctor?” That was just like with the female AI, duty, and service. Dr. Halsey wished that wild and brash Grey Team was like the Chief. But given the mission that they were about to embark on, the reckless nature of Grey was needed. As another shape emerged from the shadows of the darkened interior of the old UNSC warship, John-117 began to liberate himself from the cryo-chamber.

The shape was familiar to SPARTAN-II, the Arbiter, “Spartan, it is good to see you ready for the task ahead. The foul Jiralhanae are attempting to construct a new Covenant with their savage race at the center of it.” That was a problem, thought S-117, the Brutes were the worst of the Covenant, homicidally and dogmatic.

“Also,” The doctor said to the massive alien, “the brutes have human POW camps on their world, no doubt those lost souls need rescue before they wind up on a dinner menu.” Cortana shook her holo-head.

“Or breeding stock.” Halsey shot an icy glare at Adriana-111. No one liked to talk about the rare, but horrific example of the Jiralhanae’s love for human flesh found on Beta Gabriel.

“The universe never changes, we’re asleep, and the killing goes on.” The Chief ignored Cortana, and looked at the people assembled before him. Two of the SPARTANs in the back, magnetically locked to the hallway were unknown to the SPARTAN-II.

Halsey noticed where his helmet looked and gestured to them. “John, these are the new generation, number four, and they are the defenders of Earth while she gets back on her feet.” He looked at the armor, which was familiar, but alien at the same time.

“Of course. Didn’t think we’d leave you out?” Spoke Kelly from the shadows.

Give the number of SPARTANs and allied Elites, the Chief wondered about the real goal of this OP. “So, this is a rescue mission?”

“We are headed to Doisac , their homeworld,” Spoke Jai-006, “to give them some payback and pick some of the strays along the way.” Like most SPARTANs, John respected the Elites, but the Brutes were only good for target practice. In his time on the frontlines of the war, the Master Chief had seen the horror of those camps that the Brutes setup on human colonies. No one deserved a fate like that.

“Chief,” Cortana looked up, “I just got the download from the doctor, and the UNSC only has a dozen ships, they’re still rebuilding…this mission is a first strike at another threat.” He stared at the new armor and the new generation. He was suddenly filled with the years of combat and the long cold sleep.. Then he smiled, and the Chief grabbed his outdated MA5B from the rack and checked the ammo counter.