Here are my Top Five sci-fi films of all time. I wanted to post these, along with my Top Five war films to allow readers on my POV on military sci-fi 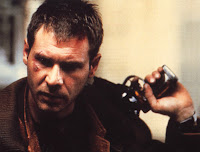 During the era of Star Trek and Star Wars came the sci-fi that gave us a dark retrofitted vision of the future. This movie introduced me to Ridley Scott and what something darker that singlehandly redefined by ideas of the future. I could never fully explain the impact that this, my favorite film of all time, had on me.

THE military sci-fi classic film, and is my most watched film (101 times and counting!). This film is prefect, having everything, from caseless rifles, dropships, and Michael Biehn. Like Blade Runner, Aliens gave a darker more real sci-fi movie that's rarely seen in sci-fi works. I mean, how cool is the scene when Hicks gives the alien warrior a migraine headache? 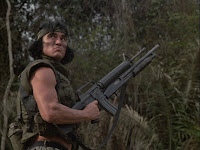 The only Arnold Schwarzenegger film I own, and the reason I smile every time I hear 'Long Tall Sally' . One my favorite parts of this masterwork is when Poncho and Billy are talking:
"I'm scared Poncho."
"Bullshit, you ain't afraid of no man"
"There's something out there, and ain't no man. We're all going to die"
The last thing I have to say is: "GET TO DA CHOPPA!"
Simply greatness.

If someone would describe the basic plot of The Terminator, then you would be laughed at. But, this movie (due to the skill of the actors, and James Cameron), is more than the sum of its parts. The future war of 2029 haunted me for most of my childhood, and so far, no one has made a good film on the war in 2029...oh, and it has Michael Biehn.


GHOST IN THE SHELL

Anime features are hit-or-miss, especially before the Anime/Manga crazy of the last few years. In the 1990's, this was the Citizen Kane of Anime, while Akira reguarded has the first Anime film to cross over to mainsteam, it is a mess at the end, while Ghost in the Shell is hard-edged with gun play, philosophically waxing, and one of the best concepts in cyberpunk. By the way, the original version is still the best over the new 2.0 version on DVD. Be sure to read the Manga Graphic Novel by Dark Horse, it is also greatness.
Posted by William at 17:45