What the Frak is up with FWS?!

Wondering what Nigel and I are doing lately? We are preparing many lists of our favorites, writing more flash-fiction, and of course, playing HALO: REACH...but , the new Battlestar Galactica is the big news around the FWS office....yep...I finally had to do it...I recently bought the entire new Battlestar Galactica series on DVD, and we are working our way through it. 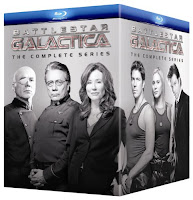 I watched the original 1970's series when it was new on TV, then every couple of years, I would see again, being run on a local TV station on a Saturday afternoon. Each time, I liked the BSG-TOS a little less...while the concept was a nice mix of Ancient Astronaut theory and Star Wars, the episode never lived up to the concept...most of the time, the TOS seemed to be going no where.

But then came the juggernaut that is the newly imagined series...oh my!

Without cable, I missed BSG completely, save for the mini-series which NBC aired...then I rented Razor, and I was hooked, however, the series was too expensive for me to rent or own. Then, I made the bold move of buying the entire series when a great Borders coupon came into my email inbox, getting it for 1/2 price!

After just 8 episodes into Season One, I can safely say, that this is great sci-fi...and is most likely the best fraking (military)Sci-Fi series ever on the small screen!

It is great mix of drama, action, military sci-fi, and mythology...and strong addictive (it ought to have a warning label on it!).

I gave Nigel the mini-series, and then he was hooked as well...terrible of me, wasn't it?
Posted by William at 16:57