These are my Top Ten Science-Fiction Weapons. 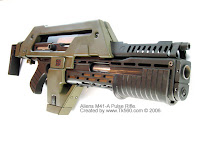 This the 10mm M-41A Pulse Rifle, one of the best, most realistic sci-fi guns ever. I think I would take this to Iraq or North Korea...watch out Kim Jong il!

The M-590 USMC 7.62x51mm Rifle from Space:Above and Beyond. I firmly believe that this rifle gave birth to the HALO MA5B rifle.
Think about.

The WASP 9mm Revolver from Avatar. My father loves old-school wheelguns...and seeing this one one-screen made me smile. 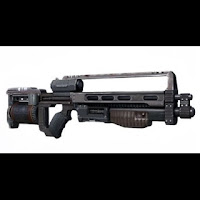 The StA-52 LAR from the first KILLZONE game. This weapon uses a bullpup drum magazine, and a single-shotgun...used this over the ISA M82...partly to watch the loading animation

The HALO 3 ODST featured a rare concept, a caseless SMG that is suppressed. Love to fire this one, just to hear the sound effect.

For some reason, I love the Starship Troopers Morita rifle. It makes no sense, and the movie is...well....but damn! The Morita is a sweet gun!

The Seburo M5 5.45x18mm featured in the Ghost in the Shell Manga. I dare you to read the Manga, and not fall in love with it!

The REF Mars Gallant H-90 Particle Beam Gun system from Robotech: The New Generation. In 1985, when I was watching Scott Bernard hunt Invid on occupied Earth, I wanted to be right beside him with one of these! What was so groundbreaking about the H-90 was that it could go from pistol to rifle with a few attachments.
Posted by William at 00:31