FWS Rant: What I Hated from Star Wars VII: The Force Awakens (!SPOILERS!)

For the most part (about 2/3rds) The Force Awakens was the Star Wars we fans had been waiting for since 1983...but there was 1/3rd I was unhappy with and one thing specifically that really bothered me and pissed me off. I was asked repeatedly in person and in emails that I address this...so if you have not seen The Force Awakens...then turn back now.

Okay then...the thing that really pissed me off about The Force Awakens was the First Order's Starkiller Base. Here is my breakdown of why it pissed me off and why it was the worst element in the film.


1. Star Wars VII: Too Many Plot Points in the Kitchen 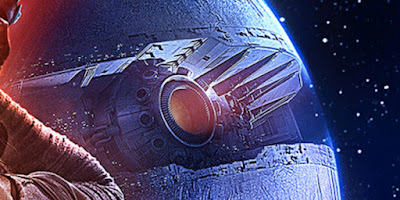 According to the opening crawl of the 7th Star Wars film, the main plot point seems to be about the disappearance of Jedi Master Luke Skywalker. And for the first few minutes it was...until the film remembered that it needed to follow in the footsteps of the Star Wars IV: ANH. That underlie mission meant that the new empire had to have an big bad overkill space station that was a threat to the new rebellion and that space fighters were the only option to destroy this massive target. The Skywalker quest angle is tucked in here and there, but soon the Kylo Ren storyline and the Starkiller Base threat overshadows the main plot point. It is only in the last few minutes that we get back on the quest to find Skywalker. It seems that the film cannot decide which is the central storyline in the film, and instead shotguns the various plot points. This causes the Starkiller Base to be underwhelming and lacks the menace of the original Death Star. Could the writers have not created some better than the Starkiller Base?

2. Well...Damn, there goes the planet and the sun!

3. It is impressive...they can destroy whole planets! But not defend themselves from fighters?! 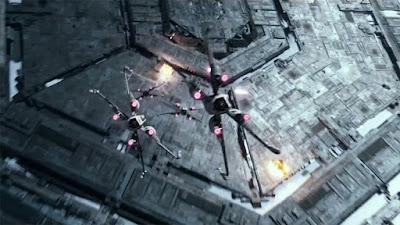 Here we go again, the space fighters wipe out the planet-sized space station to protect the rebel base. While the original Death Star was technologically beyond the level of technology seen on-screen, the Starkiller base is so beyond even that. This is when it comes to technological scale and The Force Awakens does a piss poor job of it. If the mighty First Order can construct solar system crushing weapon platform that can strike from lightyears away out of a fucking planet why cannot they defend themselves from some space fighters? Seriously?They can project a beam of mass destruction across lightyears, but somehow the Falcon gets under the radar? They can drain a star for energy, but the shields are controlled via an little control room that any Stormtrooper platoon leader can access? According to the Kardashev Scale, the First Order would be Level II civilization, but despite this technological ability, the base is poorly defended in all regards...makes you wonder. If the technological scaling was done correctly, those X-Wings would have swatted away like flies. 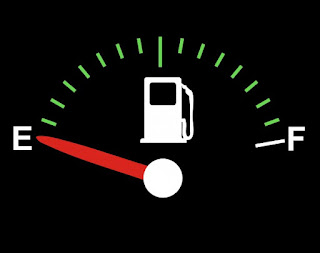 So, if the First Order had been successful in destroy the Resistance base along with the entire planet and even the entire star system...what next? They had drained the nearby star to gas up the big raygun-of-death...does that mean that the Starkiller Base is out of gas? Or does that mean that the entire planet is moved to another star system to suck it dry like some sort of interstellar tick? That means that the Starkiller Base sucks worse than the Death Star and gets worse MPG than an Hummer! That also must mean that the First Order possess the technology to move entire planets! Move planets from star system to star system! That is amazing...but once again, they cannot defend themselves from some 30 year old X-Wings. Note to all villains and evil governments in the Star Wars galaxy: quit building space station mega-weapons! Also, what the hell would happen once the star was gone in the system where the base was? Would the Starkiller Base create black holes out of these exhausted stars? Would that not be dangerous?