FWS review of Starship Trooper 2: Hero of the Federation 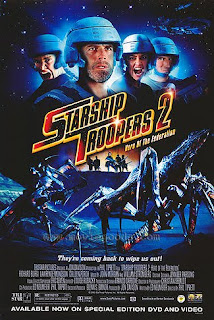 Here is the FWS movie review of the 2004 direct-to-DVD semi-sequel to 1997's Starship Troopers. The film was not directed by Paul Verhoeven, and had a budget of $7 million verse the original's $100 million, and it shows. Starship troopers 2 is basically a siege-horror-action movie, that was shunned by the third film, in the fact that it is not mentioned or it's concepts ever expanded upon.The little that connected the original movie to the 1958 book, doesn't exist here, Starship Troopers 2 was born within the Verhoven-created Starship Trooper Universe. Starship Troopers 2 takes place on planet deep within bug space around the fortress Hotel-Delta 1-8-5, and follows the Bravo Six unit of 701st Mobile Infantry being outnumbered and forced to withdraw into the massive fortress, and wait for pickup. Within the massive walls of Hotel-Delta 1-8-5 horror ensues, along with random nakedness, and bad acting. 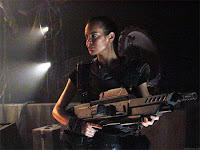 One of the things I didn't like about the original movie was the tongue-in-cheek mockery treatment of the Bug War, which cheapened the bitter gore war-scenes. Starship Troopers 2 tried to darken the mood, dumped the mockery, and get down more of serious attitude while laying waste to Arachnids. The other element that works in the film is the new Morita II direct-energy-weapon, the new portable rail cannon, and pistols instead of the throwing knives. This gives the M.I. troopers in this movie feel more futuristic and serious soldiers. Most of the other gear is directly recycled from the original.
The first ten minutes are the best in the entire film, with Bugs swarming around the few M.I. left from Bravo-Six, and all looks lost. It reminds me, in theme, of the events at Rorke's Drift in 1879 (The movie Zulu).  That is the high-points, then it free-falls head first into firmly bad movie territory. 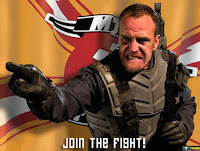 Once Bravo-Six survives a desperate run into the fortress complex of Hotel-Delta 1-8-5, the movie's bad acting, weak script, and personify disorder ruin what could have been a good re-start to the series. The personality disorder that plagues Starship Troopers 2 is due to the film markers attempt to mix horror, action, and psychological drama into one film that doesn't have foundation that could support it. These crop up when the energy barrier is up, protecting the fortress from the Bugs to display the psychology-horror that effects on the M.I. troopers, but the acting and writing simply cannot pull it off.
The new "control" Bug species that takes over the troopers bodies is painfully not original, coming off hammy and tired. This all leads to an ending that is obivous for well over an hour. 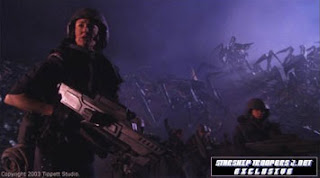 The prop Morita II weapon seems to have a flash-cap on the front of the barrel. During the movie, I swore that the SFX department used a light at the end of the prop to fill in the DEW flashes....wow....that is...bad. In addition, the tired Fednet breaks are nearly worthless from their recycled footage from the 1997 film.

Should You Watch Starship Troopers 2: The Hero of the Federation?
Oh, Dear God, NO! To show how little I bought of it, I watched this free on Youtube. I wouldn't waste my time (or life) with it.