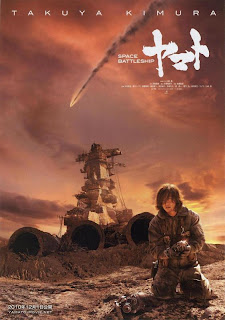 Space Cruiser Yamato (AKA Starblazers) was one of the founding pillars of my science fiction consciousness, and for years, the fans have been promised a live-action Japanese verison.

It finally happened in 2010, and the fans (including me) of Yamato got lucky, the Japanese turned out a movie that is heralded as a solid B+ by Anime News Network, and the Japanese press seem to also pleased by the effort. From the reviews (both American and Japanese), it seems that the new Battlestar Galactica was largely used as the template for the action and mood of the Yamato movie.

The task of condensing the 26 episode 1970's Anime epic Space Cruiser Yamato into a 2.5 hour movie was a huge risk for the film markers, especially considering how worshipped the original series is global. The trailers were impressive in keeping the costuming similar to the 1970's Anime series, especially the Anchor symbol, the frank and correct (to the series) above ground landscape of a dying Earth at the hands of the Gamilions.

But it was the emotional impact of the seeing the beautiful lines of the Yamato, the massive tracer round pouring out of the side AAA turrets, and the music, made me believe that justice had been done by the old series.
The biggest change as been in the Gamilions. In the original Anime TV series, they were blue skinned Roman-esque humans that drank wine and planned bad war strategies. Now, there are, according to the blog: the Good, the Bad, and Godzilla: "while the enemy Gamilas Fighter, an arthropod-like design, is a vast departure from the original," and AICN reports that the Gamilion/Starsha races and story lines have been reworked and that is the most controversial aspect of the live-action movie. That might be a good thing. The Gamilion and the Iscandar element of the Space Cruiser Yamato is one of those weak links, and the older I get the less I like blue-skinned human-aliens. The Internet seems lacking in information on what they look like, regarding it as a major spolier. My guess...insects... I just hope to the Lords of Kobol that Starsha is not some bug with a long blonde hair!

So, will there be a US release? It seems so, but no DVD or movie theater date is currently available...maybe I should buy an international codeless DVD player, and learn to read Japanese.

And if you are hungry for some old-school original Starblazers then the official website as a rather good FREE webcomic that is set 25 years from the original series. It's quiet good.
here it is in 17 parts:

LINKS to the Reviews: 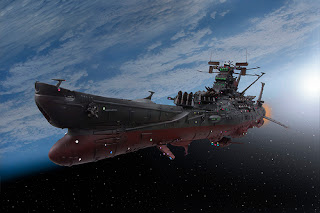 For those that want to see the cool props of the Yamato movie:
http://augustragone.blogspot.com/2010/11/dressing-space-battleship-yamato.html

And lastly, a English text review of the movie by Japan Times:
http://search.japantimes.co.jp/cgi-bin/ff20101126a1.html
Posted by William at 11:37