FWS Newsfeed: The ALIENS 5 Pulse Rifle and Why I Hate it! 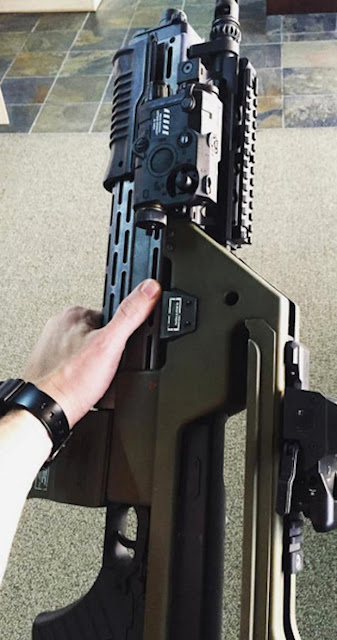 Yesterday, director and creator Neill Blomkamp showed off an important piece of  the upcoming and untitled ALIENS 5 film: the mother fucking M41A1 Pulse Rifle! However, this is not our 1986 Colonial Marines Pulse Rifle. Neill informed us that the new & improved Pulse Rifle is fitted with an integrated rail system. Not only is there an RIS for attaching all manner of technological goodies, but there is now an upper sight rail system for attaching all kinds of scopes and sights, and there is also an new longer barrier with a muzzle break. So, why am I, a huge fat ALIENS nerd, not happy about the improved Pulse Rifle for ALIENS 5? Because it is completely half-ass and lazy. I love you Neill and your movies (not CHAPPiE  though), but seriously, a rail system? Then you attach an older generation PEQ, give the 10mm barrel an AR15 muzzle break, and you mount an EOTech holographic sight that you can buy from Cabela's for five bills? You call this an improvement on the iconic original carbine from the holy 1986 film? This Pulse Rifle looks more like something a fan on the internet would construct out of an airsoft copy, adding cappy Chinese knock-off tacticool items from eBay. Is this 2006 or 2179 because I am confused! Neill, just put the original Pulse Rifle in the fifth film and call it good. Don't fuck with perfection. After all, remember what Coca-Cola did with New Coke?! Yes, the original Pulse Rifle looks a little dated compared to some modern sci-fi weaponry, but at least it is the original and not polluted with crap from an airsoft/sporting goods store. Some new variants of the M41A1 would be cool, or a new pistol, but don't ruin the M41A1 for us. Anyone else share my opinion or do you like it? Comment below and let me know!
Posted by William at 14:52