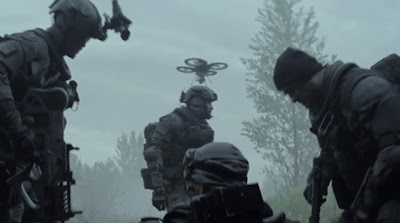 It seems that Ubisoft is taking a page from the HALO playbook and using the live-action trailers to sell their newest game in the long-running Ghost Recon series: Tom Clancy's Ghost Recon: Future Soldier. According to rumor, Ubisoft spent around $10 million on this 25 minute short-film that is expected to drop Monday on various video sites. Unlike some of the HALO live-action shorts, Ghost Recon Alpha is directly linked to the game, telling the backstory and showcasing the high-tech to the game that will be dropping on May 22nd. The film sports some heavy talent behind the lens, including one of Ridley (God) Scott's companies, and the trailer looks great, with attention being paid to making it look like film rather than an advert. Ghost Recon: Alpha will followthe earlier 2010 live-action trailer and the Believe in Ghost series with former host of Future Weapons and SEAL scout-sniper, Richard Machowicz.
I have to say, I'm excited by a near-future MSF short film, even if its related to the Ghost Recon game series. I use to really enjoy Ghost Recon 2005, but the game was buggy, and not the best when it came to realistic military-shooter action, but the later Advanced Warfighter games that take place in Mexico I wasn't impressed with. at all, burning me on the series. However, I am curious to see if Future Soldier will be worth my cash...

Here is the party line from Ubisoft:

- Characters: Characters present in the movie will be playable characters in the video game.


- Storyline: Their actions in the movie also have direct implications on the video game storyline.


- Location: The location of the movie will also be playable in the game’s multiplayer modes.


- Exclusive unlock: A secret code is also hidden in the movie, enabling access to an exclusive weapon in the game. (unlock available only on Xbox 360® and PC)