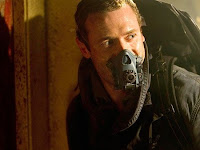 Recently, two trailers were released for the Spielberg time-traveling, dinosaur, and recolonization epic, Terra Nova...then nothing.
Where is the pilot?
Well, it seems that there is not enough footage to form a good two-hour pilot/movie, and there is debate about how long the pilot should be and its ballooning cost (somewhere in the $20 million range...holy frak!)
Then there is the storyline after the pilot...rumors say there are NO stories for after the pilot...then there is massive SFX costs and works...after all...making Dinosaurs is not easy.
Reports have the shooting location for the nascent colony is rainy, and this as hampered attempts to film more footage. When I watched the two released trailers, I got a real sense that there was some unevenness to the footage and the overall concept. It was just a feeling that now as been confirmed. 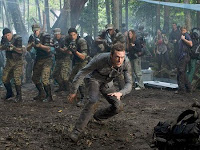 My take? Terra Nova is a cool idea and somewhat original, but flawed...why would the time portal be opened during a time when the Earth was so different than yours today? What is wrong with after the 1st Ice Age, when there are no man-eating monsters? In addition, it seems that Terra Nova would be better as a series of mini-movies, not a series, like a once-a-year television movie or miniseries, or like much of the cable series, like Mad Men, where there are only a few episodes a season. This would allow of the most bang-of-the-buck and time to work out the plot.
This could be a great sci-fi series...however its on FOX...and we know what they do to sci-fi series (cough, Firefly, cough, Space:Above and Beyond, cough)
Posted by William at 17:39