Just as Terra Nova enters limbo, another great sci-fi series begins to take shape. Blood & Chrome is currently filming, and below is the press release from Sci-Fi from March 26th: 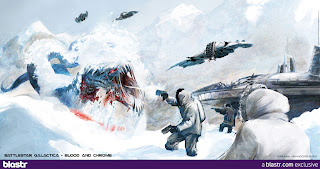 "Luke Pasqualino and Ben Cotton (Hellcats) star in Battlestar: Blood & Chrome, which takes place in the 10th year of the first Cylon war. As the battle between humans and their creation, a sentient robotic race, rages across the 12 colonial worlds, a brash rookie viper pilot enters the fray. Ensign William Adama (Pasqualino), barely in his 20’s and a recent Academy graduate, finds himself assigned to one of the most powerful ships in the Colonial fleet...the Galactica.
The talented but hot-headed risk-taker soon finds himself leading a dangerous top secret mission that, if successful, will turn the tide of the decade-long war in favor of the desperate fleet. Executive producers: David Eick and Michael Taylor. Written by Michael Taylor from a story by David Eick, Taylor and Bradley Thompson and David Weddle. A production of Universal Cable Productions."

This first thing that jumps out at me, is that Ronald Moore is not on staff of Blood & Chrome. Then the line about the series picking up at the end of the war borthers me. To be honest, I wish they would not started it off at the end of the war, but my using Adama's character as the main led boxes them into the last year of the war due to flashback scenes from Razor.
I would like to see the apex of the war, not the end. After all, if the series is picked up, then are the writers are boxed into switching the series focus from the war to the aftermath? I don't want a series that looks back at the war, and is more about post-war Colonial society rebuilding than combat. Since the original 1970's BSG series, we, fans have wanted to see the Cylon War.
However, I must learn to trust the forces at work on Blood & Chrome, after all, they created BSG and it was epic...so this should be too, right?