The rail gun as been a promise of military science fiction for some time, I can recall, during the heady days of SDI, of satellites in orbit armed with rail guns.
Now, its 2010, we are finally seeing the promise fulfilled. Navy surface warfare center tested a 32 megajoules EM cannon that propelled a oddly-shaped projectile at over 5640 MPH. At that velocity, it could outpace the ability for a target to counter the incoming round. 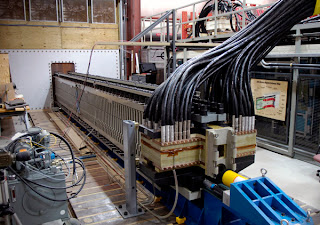 The nature of Naval rail gun is could swing the primary naval war-vessel from the super-carrier back to the battleship...or they could combine the two...into a battlestar?
Sorry, couldn't resist!
The range of this $250 million badass? 126 miles.
Not only that, but this naval rail gun could be used as defense against missiles, air targets, and of course, other ships. The round of a rail gun would have the kinetic punch to knock a crippling blow to an enemy ship...and the level of armor protection at this point is moot.
The rail gun trumps them.

The amazing thing about see a real-life rail gun is the plasma plume...and amount of support that a weapon like this would require. It reminds me of the massive naval guns of the Iowa or Yamato class.

So, are we going back to the WWII battleship? 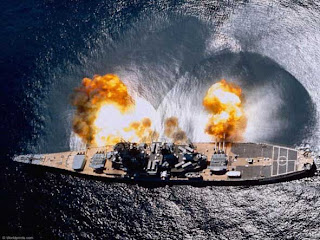 here is the official youtube video on the test:
http://www.youtube.com/watch?v=VWS1dBrAAJU
Posted by William at 22:20