The Next Flash Fiction Serial

After the holidays, FWS will gearing up for the next flash fiction serial. The subject matter for the next FFS was original selected has a futuristic invasion of Normandy called Beachhead.
However, my writer's block as put a halt on that series, and that forced FWS to use the planned HALO fan fiction serial called Frontlines. I have  most of these written and on the way to being finished, and also, HALO fan-fiction would allow the series to be placed on other websites...hopefully generating some more buzz about FWS. 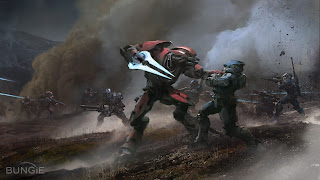 HALO: Frontlines will be about 14 parts, showing the Human/Covenant War from different points-of-view than just the SPARTANs and ODSTs. Most of the stories are concerning ground forces, while a few others will show other positions within the UNSC. The idea for HALO: Frontlines came from my thoughts on what another HALO game could look like.

What can you, the reader, expect from HALO: Frontlines?
First off, I am lover of the HALO universe, as most of you can guess, and that I take great pride in offering some stories that have not been seen.
Second, deep research. I scoured many websites for research on the elements within HALO: Frontlines. Third, readers will have stories orbiting around major events in the HALO timeline. For example: