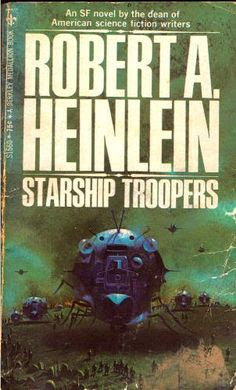 FWS rarely posts an article without mentioning the foundational work of military sci-fi that is Robert Heinlein's 1959 novel Starship Troopers. From nearly day one of FWS existence, we have talked and talked about his work and its many interpretations and that will continue throughout the life of this humble little MSF blog...despite my personal feelings about the book. I am not the biggest fan of SST nor many of its interpretations, but I respect its writer and the core story. Simply put, here is no way to escape its black hole force hold on the genre, and once again, we here at FWS surrender to it with its power with yet another blogpost on SST. One day very soon, FWS will discuss the influence of SST on the entire genre of military SF and why SST merely existing has helped military SF forge the genre to what it is today. In some ways, it is the Star Wars of military sci-fi. It was reported by io9 that the long-awaited more accurate tvision than the 1997 film is getting more of a chance to see the light of day....but is the news a good thing? According to the article, two experienced screenwriters, Mark Swift and Damian Shannon are working on the latest script that will finally allow us to experience the technology and tactics of the 1959 Mobile Infantry troopers and not the 1997 Mobile Infantry troopers. That means we will see powered armor on the bounce! I have much concern though because these screenwriters have recently penned the Baywatch film script and can this new SST film overcome the 1997 film? 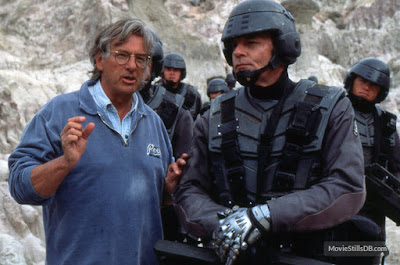 Love it or hate it, the 1997 film is very popular and there are many in the general public that only know the term "Starship Troopers" via that bloody mess by Paul Verhoeven. Along with the 1997 film, there have been two other films, an animated film along with a short-lived animated tv show, topped off by wargame and comic series. All of these works are based on the house that Verhoeven built. Any new interpretation of the iconic book will have to navigate around the 1997 film and its iron-fisted control on the SST brand. My advice? Do not call it "Starship Troopers" or put Robert Heinlein's name at the beginning title, so it would read: "Robert Heinlein's SST". Maybe "Citizenship", "Service", "I, Rico"...just kidding. Bottomline, there needs to be a new vision of the book put to film, but my hopes to ever see this and the Forever War movie in the near future are dim. Until then, the Verhoeven bloody future war epic complete with male and female showers and Denise Richards acting will remain the ambassador of the SST brand.
Posted by William at 21:28